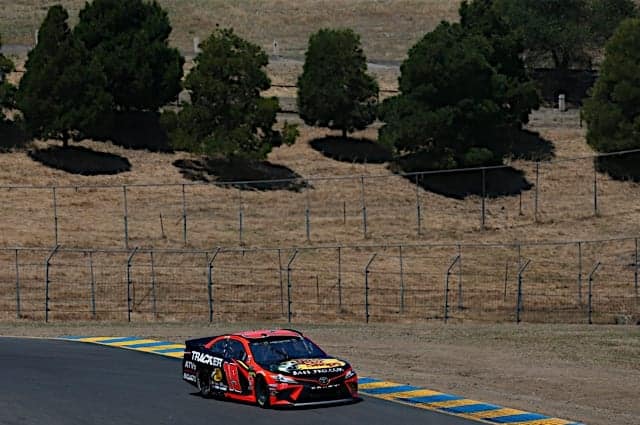 The NASCAR Cup Series will spend its Sunday (June 6) afternoon winding its way through wine country in the hills of California.

It’s the first time in two years that Sonoma Raceway has hosted a series race, with COVID-19-related travel restrictions and concerns preventing NASCAR from venturing out to the track in 2020. Martin Truex Jr. is the most recent winner, claiming back-to-back victories in 2018 and ’19, and has the most wins at the road course of any active driver with three. Kyle Busch, the only other active driver with multiple wins there, has two, while Kurt Busch and Kevin Harvick each have one.

Without qualifying, Kyle Larson sits on the pole for the race. Larson is coming off a dominant win in the Coca-Cola 600 at Charlotte Motor Speedway last week and also holds the best-ever qualifying lap at Sonoma, where he laid down a 1:34.598 lap in 2019. Hendrick Motorsports teammate Chase Elliott finished second at Charlotte and will start in the same spot at Sonoma; he is also the most recent road course winner with his triumph at Circuit of the Americas two weeks ago. William Byron, Denny Hamlin and Kyle Busch round out the top five spots on the grid.

Few issues cropped up during inspection, but Anthony Alfredo‘s No. 38 Front Row Motorsports Ford will start at the back due to a violation. Alfredo’s crew chief, Seth Barbour, was ejected as punishment, so Derrick Finley will be atop the pit box for the team.

Was apparently a body part issue on the Alfredo car that NASCAR didn’t like. Made them replace the part and sent crew chief home. Competition director Derrick Finley will crew chief today for Alfredo, who will drop to the rear on the pace laps.

The Cup Series will complete 90 circuits around the 12-turn course, stretching across a 2.52-mile layout with more than 150 feet of elevation change. As of 2019, NASCAR elected to use the carousel again after years of sticking to the “chute,” which bypassed the main configuration’s fourth and fifth turns.

Around the Carousel they go! #TSM350 pic.twitter.com/fxWH3oxhM1

Sunday won’t just feature NASCAR stars, either: San Francisco 49ers head coach Kyle Shanahan will give the command to start engines, while NBA legend and 23XI Racing co-owner Michael Jordan was spotted in the garage prior to the event.

Though the Camping World Truck Series is off this weekend, A.J. Allmendinger claimed a thrilling win in Saturday (June 6) afternoon’s Xfinity Series event at Mid-Ohio. The No. 10 rebounded from a pit road penalty to drive up through the field and take the checkered flag, finishing just ahead of Kaulig Racing teammate Justin Haley.

An additional tone of excitement has already been set for the day, too: Formula 1 took to the streets of Baku for the Azerbaijan Grand Prix Sunday morning, where Sergio Pérez scored his second career win, as well as his first victory and podium, of the 2021 season. Perez was followed by Sebastian Vettel and Pierre Gasly; with the runner-up finish, Vettel scored the first podium for Aston Martin Cognizant in F1 competition. Points leader Max Verstappen led more than half the event, but crashed out late, while Lewis Hamilton ran well until a brake lock-up relegated him to a 15th-place finish.