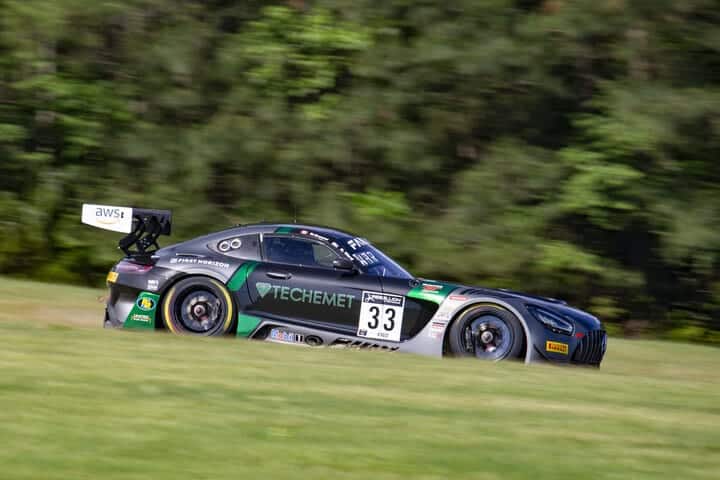 HTP Winward Motorsport’s Mikael Grenier and Russell Ward claimed victory Sunday (June 6) in Race No. 2 for Fanatec GT World Challenge America Powered by AWS at Virginia International Raceway.  It is the first time this year that K-PAX Racing has failed to win.

“Just a flawless race from all of us.  I’m super proud of everybody,” Ward said after the race to SRO America’s Amanda Busick.  “This has been a long time coming.  We’ve been steadily improving from Sonoma.  Every race has been getting better and better.  Now, we have our first victory.  It feels really good.”

Grenier won the pole for Sunday’s race back on Saturday morning and was able to hold off Wright Motorsports’ Jan Heylen at the start.  Further back, Inception Racing’s Ollie Millroy had contact in the first turn that resulted in right rear suspension damage to his McLaren 720s GT3.  While Millroy was able to drag his McLaren back to the pits, the incident ended his day.  The right rear tire came apart while Millroy was driving back to the pits, resulting in the race’s sole safety car period.

Sunday was always going to be a struggle for K-PAX Racing.  The two Lamborghinis didn’t qualify all that well as Jordan Pepper bested Giovanni Venturini with a fourth-place effort.  Pepper quickly moved up to third, but had an off-course excursion on lap 6 that saw him way out in the grass after the car’s anti-lock brake system malfunctioned.  That dropped Pepper from third to 13th.  Shortly afterwards, he had to make an unscheduled pit stop that put him a lap down.  The remainder of the race was a struggle for Pepper and Andrea Caldarelli after Saturday’s win.

Additional stops for repairs saw Pepper and Caldarelli finish 12 laps down in 14th at the finish.  Since they managed to stagger through more than 70 percent of the race with their braking issues, they still received points.

The No. 6 Lamborghini, which was hampered Saturday with gearbox issues, quickly moved up to fourth with Venturini at the wheel.  Once there, he settled in there, unable to make ground on Turner Motorsport’s Robby Foley.

At the front, much of the first half of the race was an inter-class duel between Grenier in the Pro class and Heylen in the Pro-Am class.  The two proceeded to run away from the pack, opening up a lead of nearly 10 seconds on Foley.

It took until the mid-race pit window for Heylen to make a move for the overall lead on Grenier.  On lap 25, he managed to make the move stick prior to stops.

After switching to their co-drivers, Fred Poordad exited the pits with the overall lead, but Ward was right on his tail.  It took less than a lap for Ward to dispatch of Poordad.  Once out front, he ran away with the race, opening up the lead every lap over Corey Lewis, who jumped into second in the Pro class during the pit window.

Ultimately, Ward was not threatened en route to his and Grenier’s first-ever overall victory in Fanatec GT World Challenge America Powered by AWS.  The margin of victory was 19.384 seconds over Lewis and Venturini.  Foley and Michael Dinan ended up third, but not without a scare as Dinan stopped the car on course with a couple of laps to go after having an off-course excursion.  The excursion didn’t cost him a position in class, but dropped him from fourth to sixth overall.

In Pro-Am, the race appeared to be Wright Motorsports’ to lose.  Even despite Ward passing him with ease for the overall lead, he had a 20-second advantage on DXDT Racing’s David Askew for the class.  However, it was discovered that the crewman with the deadman valve during refueling did not wear a helmet when he went over the wall during the mandatory stop.  That is a drive-through penalty, meaning Poordad’s lead went right out the window.

Serving the penalty meant Askew was able to take over the class lead instead.  Ultimately, it ended up being a three-man duel between Askew, Poordad and Compass Racing’s Michael Di Meo.  Di Meo was able to get past Poordad, then made the move on Askew in turn 3 to take the class lead with 13 laps remaining.

From there, Di Meo was able to keep up a steady pace as others faltered to give him and Matt McMurry the Pro-Am victory and finish third overall.  Their margin of victory was 2.966 seconds over Heylen and Poordad.  Racers Edge Motorsports’ Jacob Abel and Taylor Hagler ran third.  Zelus Motorsport’s Jason Harward and Madison Snow were a lap down in fourth, while DXDT Racing’s Michael Cooper and Erin Vogel were fifth.  Askew and Ryan Dalziel faded to sixth after Askew spun in the closing laps.

Fanatec GT World Challenge America Powered by AWS teams will be out of action for the next couple of months, mainly due to the sheer quantity of major events in June and July.  The season is scheduled to resume with a doubleheader weekend at Road America Aug. 27-29.