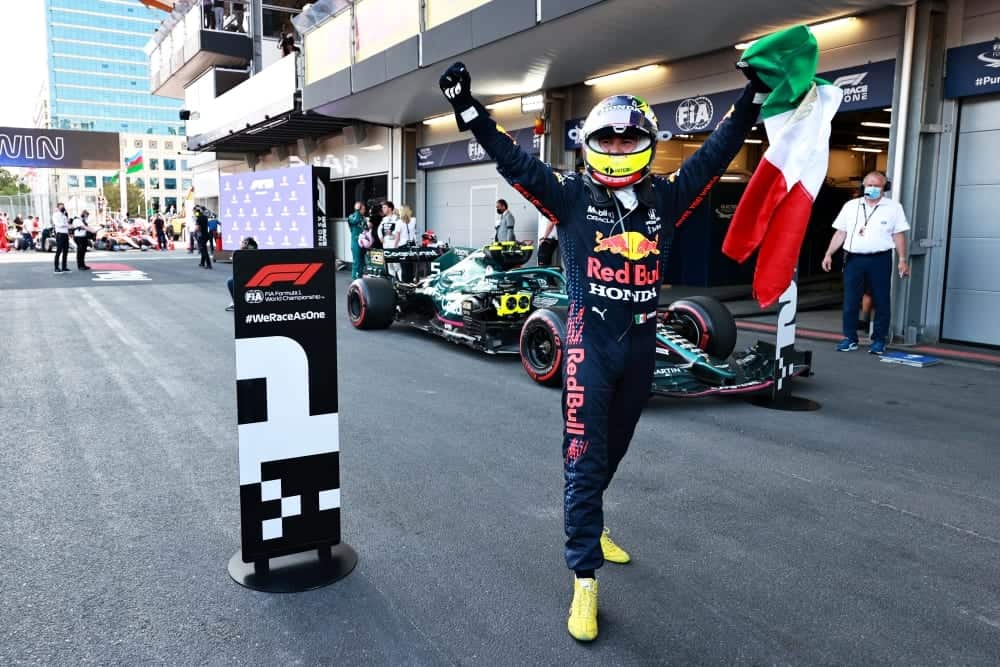 Max Verstappen and Lewis Hamilton have been the cream of the crop all year long. Combining to win each of the first five races, both drivers have been near perfect. But on Sunday (June 6), Verstappen suffered a puncture and Hamilton locked up on the ensuing restart, opening the door for Sergio “Checo” Perez to claim his second Formula 1 victory — and first with Red Bull — in the Azerbaijan Grad Prix.

Coming home second in a brilliant drive, Sebastian Vettel gave Aston Martin their first podium in F1. Having never finished below fourth in Baku, the fresh tires Vettel had saved helped him achieve that podium. Completing the podium for AlphaTauri, Pierre Gasly logged his best finish since his win in Monza last year.

For the first time in 54 races, Hamilton failed to score points. Adding on to the Mercedes misery, Valtteri Bottas finished P12, meaning both cars failed to finish in the top 10 for the first time since Barcelona in 2016. Points leader Verstappen held onto his lead, despite suffering a hard crash when his left rear tire failed on the long straight.

Mick Schumacher and Nikita Mazepin kept out of trouble to log their best finishes in P13 and P14, respectively.

When the lights went out, Leclerc led the first lap from pole. With Hamilton in hot pursuit, the Mercedes driver used the raw power of his car to pass the Ferrari a lap later.

When pit stops began on lap 11, Hamilton was the first to pull the trigger. Due to Gasly entering the pits, Hamilton was held up briefly by the AlphaTauri after a slow stop. Coming out behind both Red Bulls, Verstappen checked out with Perez and Hamilton locked in a tense battle for P2.

The race changed on lap 31, Stroll suffered a scary tire failure impacting the wall just before the pit entrance. Stroll was shaken up after the crash, but otherwise was fortunately unhurt. The safety car was deployed, and on the ensuing restart, Verstappen sped off into the distance.

As the laps clicked away, Verstappen needed to survive five more laps to win Baku and extend his points lead over Hamilton. Unfortunately, his left rear tire had other plans. Suffering an identical blow out to Stroll, Verstappen crashed out while leading to log his first DNF of the season.

Max is out of the car. It looks like an issue with his left rear tyre has caused his dramatic exit #AzerbaijanGP ?? #F1 pic.twitter.com/2LMONjC1qJ

With his championship hopes seeming gone, the red flag was displayed with race director Michael Massie wanting to finish the Grand Prix under green. With a two -ap dash set to finish the race, all that stood between Hamilton and victory was a standing start. On the standing start, Hamilton’s brakes were pluming smoke and that would cost him dearly. Despite passing Perez on the restart, Hamilton locked up and slid right trough turn one into the run off, dropping down to last.

Perez held the lead with Vettel in chase. Meanwhile, behind them, Gasly and Leclerc battled it out for the final spot. In the end, Perez held on for his second career victory in F1 as his car would lose power on the cool down lap.

“I’m sorry for Max, he had a tremendous race and deserved the win,” Perez said. “But in the end it was a fantastic race for us. It was close, but we just managed to finish the race. [Hamilton] pushed me, I had so much pressure from him. But at the restart, I was like, I’m not going to lose it.”

For Vettel, his tough start to the season had a turn around with his 5th place in Monaco last week. Moving to a new team, his Aston Martin hasn’t been the quickest, but the runner-up finish is just as good as a win for the German.

“It’s been a tough start [to the season] for us, but it’s been a good race,” Vettel said. “I had really good pace at the restart, we had fresher tyres so yeah, great day and I’m over the moon. Yesterday we didn’t quite get it, but today, yeah.”

The dejection for both Verstappen and Hamilton was visible. With neither of them scoring points, Verstappen holds onto his narrow four-point lead atop the standings. The tour now will take a few weeks off, before heading to Circuit Paul Ricard for the French Grand Prix June 18- 20. Lewis Hamilton is the defending race winner.

Another follow-the-leader snoozer F1 “race.” I can’t wait for the next exciting “event” at a one and a half miler NA$CAR cloned track. I’ll bet its a long wait.

People keep asking if bubba is related to Kenny Wallace. Could be, but it took Kenny longer to get zero cup wins.

Bubba’s real name is William Darrell Wallace. He is the love child of Darrell Waltrip and Rusty Wallace.

Sorry I missed it but I was watching a hummingbird for a couple hours.

If you saw it you would know it was one of the wildest F1 races ever. It would have to be for Vettel to finish SECOND to Perez. There was a standing restart with two laps to go and Hamilton out-braked into a corner and took himself out.

When I first saw this venue years ago I thought it would be a very dull street circuit. Especially that very narrow part through the old castle.
Now I think it is one of the best circuits. I like the very long, wide straight. Going 185 mph on a street circuit for several seconds is amazing. I thought this race was very exciting for an F1 race. The second standing re-start compares to a GWC double wide re-start in NA$CAR.

That’s what I thought too about the restart but there is only one bite at the apple. I hope it isn’t the start of a trend. But this way the lap counter didn’t change and the cars have a limited amount of fuel to start the race and no more fueling.