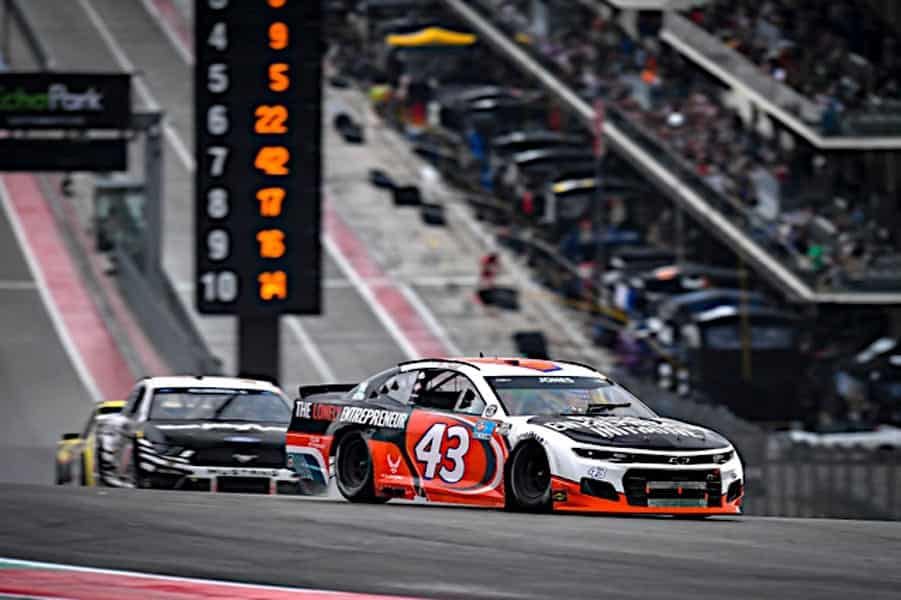 Throughout Sunday’s (June 6) Toyota/SaveMart 350 at Sonoma Raceway, several Cinderella stories managed to sneak their way inside the top 10. Between wildly different pit strategies throughout the event and a flurry of late-race incidents, the problem was staying power.

When the smoke from some late wrecks cleared, there was one underdog who made it through a messy ending OK. Erik Jones exited with bragging rights among the smaller operations, earning an 11th-place finish for Richard Petty Motorsports. It was the best result here for RPM at Sonoma since Sam Hornish Jr. ran 10th in 2015.

After rolling off 18th, Jones slowly worked through the field in order to earn a single point at the end of stage one. During stage two, Jones chose to play the strategy game, pitting before the end of the stage was complete. It dropped him to 34th, near the back of the lead lap, but was not indicative of the top-15 speed he showed all race long.

That strategy allowed the No. 43 Chevrolet to restart the final stage inside the top five. During a long green-flag run, Jones faded on older tires, sliding back to just outside the top 10. But the track position paid off and put the team in position to capitalize with a solid finish.

That’s when the day turned eventful. A wreck involving Ross Chastain and Corey LaJoie left Jones with some damage as chaos unfolded around him.

Chaos right up ahead, heads up driving from @Erik_Jones! pic.twitter.com/CRgcudPEml

10 laps later, Jones’ day nearly ended with the final caution as he narrowly avoided Christopher Bell spinning across the track.

However, the No. 43 was able to survive, sneaking away with Jones’ best run since a ninth on the dirt at Bristol Motor Speedway. Jones leap-frogged Chase Briscoe, who finished 17th, to climb up to 25th in the standings. It’s a small shot of forward momentum for a program that hadn’t finished in the top 15 since late March.

Michael McDowell and Daniel Suarez put themselves in position for strong finishes Sunday. Suarez, in particular, impressed for Trackhouse Racing after rebounding from an early pit road penalty that left him 37th in stage one.

The duo were running eighth and ninth entering the final lap, but they didn’t finish that way. Contact between them ruined both their days and sent McDowell into a 360-degree pirouette midway through the final turn.

“Super unfortunate there at the end. We were running eighth coming to the white flag. Bumper cars didn’t work out there on the last lap,” McDowell said. “We had another top 10 going and it didn’t work out that way.

McDowell finished 28th and Suarez was 12th after the contact. It was still Suarez’s career-best performance at Sonoma, moving him up a spot to 22nd in the standings.

Bubba Wallace, meanwhile, had a bounce back performance of his own. Not known as a road racing expert, Wallace was running around the top 15 during most of the early parts of the race. But near the end of stage two, he had a tire go down, trapping him a lap off the pace after the unscheduled stop.

It took until LaJoie’s wreck, on lap 78, for Wallace to earn the free pass. From there, the driver of the No. 23 Toyota executed a masterful drive, gaining nearly 20 spots to finish up the race in 14th. It’s the third top-15 finish in the last four races as 23XI Racing slowly builds momentum for the season’s second half.

It was an underdog kind of day on Saturday at Mid-Ohio Sports Car Complex in the NASCAR Xfinity Series. Andy Lally is not an underdog, in theory, based on his road racing ability in multiple series. However, the team he linked up for in this event (Our Motorsports) certainly is a regular in this space.

Lally made the most of underfunded equipment, matching a career-best fifth-place finish. The result was even more impressive considering an uncontrolled tire penalty under a stage two yellow mired Lally deep in the field. Charging back through traffic, he had a chance at the win during a final restart, persevering through last-lap contact with Riley Herbst to finish fifth.

See also
Xfinity Breakdown: 'Three-Wide for the Lead,' Allmendinger Digs Out a Win at Mid-Ohio

Lally wasn’t the only Our Motorsports driver to stand out, though. Brett Moffitt had a legitimate chance to win during the final stage, climbing inside the top five only to retire to the garage with fuel pump issues.

A little further back, Brandon Brown‘s sixth-place run marked his second straight top 10 as he tries to snag a playoff spot for his unsponsored team. Meanwhile, Josh Berry’s pieced-together season continues to impress, this time driving for Jordan Anderson Racing. An eighth-place run keeps him within striking distance of the top 12 in points.

Over at DGM Racing, Josh Williams claimed his first top 10 of the season. Williams outran teammate Alex Labbe to end the race in 10th.

It’s all about pride and no points next week for the Cup Series as they run the NASCAR All-Star Race at Texas Motor Speedway. McDowell is the top underdog for this one; he’s already locked in the main event by virtue of his Daytona 500 win. Most other drivers in this category will need to race in through the preliminaries or hope they advance through the Fan Vote.

Over on the Xfinity side, Jordan Anderson’s team has been on a roll. After failing to qualify for the season opener at Daytona International Speedway and being locked out of the nine races that followed, the No. 31 team has roared back with three straight top-10 performances. Finishes of eighth, fifth and eighth have allowed the No. 31 team to move to 40th in the owner standings, which would lock them inside the field when there isn’t qualifying.

Huge thank you to @OurMotorsports for the opportunity and of course to @PCLConstruction , IFI , UCC, Energy Air and @MF1Updates for the support!

Gutted. Got spun in the final corner of the last lap, costing us a Top-10 finish.

I really hate it for our partners at @LovesTravelStop. Ready to rebound with them next weekend at @TXMotorSpeedway. pic.twitter.com/thyjzNdqsO

I wonder how Chip felt seeing his two cars running side by side the last 2 laps? Putting their top ten finishes in jeopardy.