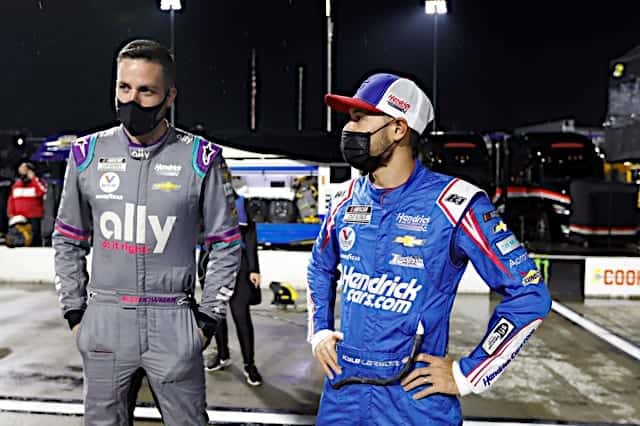 Teammates in NASCAR often have to walk a fine line.  Drivers who compete for the same multi-car organization usually show a certain level of on-track courtesy to each other.  However, racing in NASCAR does not have the same level of comprehensive cooperation among teammates that you sometimes see in other motorsports.  Racers are expected, and often encouraged, to have an individualistic streak.  When trophies are on the line, team alliances can mean very little.

This season, three organizations have established themselves as the teams to beat in the Cup Series: Joe Gibbs Racing, Team Penske and Hendrick Motorsports.  Their 11 drivers have combined for 15 of the 16 race wins this season.  All of their drivers are heading for the playoffs.  Some of them will be battling for the championship.  But what happens if one of those teams is able to put multiple drivers into the championship race?  Will those title hopefuls race each other like teammates?

JGR found itself in this situation in 2019.  That year, Denny Hamlin, Martin Truex Jr. and Kyle Busch all represented Gibbs’ team in the championship race.  It was a great accomplishment for JGR to put three veteran drivers in the prime of their careers in position to win a title.  But the job was not done just yet.  There was still a chance that the fourth driver, Kevin Harvick, could win the championship, meaning that the JGR trio would have to watch how aggressively they would race each other.

In the end, pit road played a bigger role in deciding the championship than on-track battles.  Truex was fast early in the race, but his crew mistakenly reversed the left and right side tires during a pit stop, forcing the No. 19 back to pit road.  Hamlin looked strong until his crew put a comedically large piece of tape on the front grille of the No. 11.  The tape caused Hamlin’s Toyota to overheat and forced him to pit out of sequence as well.

Fortunately for Gibbs, Busch’s team had a drama-free race.  Busch, who had a quieter playoffs relative to Truex and Hamlin, captured the checkered flag in the championship race and earned his second title.

So, while things ended up fine for JGR in the end, it was baffling to see two of its teams make such huge mistakes in the most crucial moment of the season.  Perhaps Hamlin’s and Truex’s teams, knowing full well the strength of their biggest competition, made rash decisions in the pits they would not have made otherwise?  In any case, winning the 2019 title was far from a slam dunk for JGR, even with its advantage in numbers.

Meanwhile, Team Penske’s drivers all know how much talent is in The Captain’s shop.  It was Brad Keselowski who, during his own championship run in 2012, lobbied Penske to bring on Joey Logano for the No. 22 team.  That decision paid off well for the organization when Logano won a title of his own in 2018.  And Penske had an eye on Ryan Blaney for years before he took over the seat of the No. 12 car.  As Gibbs and Hendrick have made adjustments to their driver lineups, Penske’s has stayed the same for a few years now.  It feels like all three of them can win on any given Sunday and remain top-tier championship contenders.

However, beneath the camaraderie at Team Penske is a group of racers divided by differing agendas.  At the end of this year’s Daytona 500, Logano and Keselowski found themselves among the racers battling for the win.  On the last lap, Logano, as the leader, threw a block on second place Keselowski that caused him to turn the No. 22.  This move triggered a violent wreck that took out both drivers and allowed Michael McDowell to slip through and win the race.  The wreck left Keselowski, who has never won the Daytona 500, fuming and visibly frustrated about another lost opportunity to win the Great American Race.  But Logano, the 2015 Daytona 500 winner, practically shrugged the whole thing off.

Since then, it seems likely that Keselowski has thought more about what life might be like beyond the driver’s seat.  Rumors have swirled about him possibly leaving Penske to race for and take an ownership role in another team.  Compare that to Logano, who clearly feels confident that he is in the best position to win races and championships right now.  Throw in Blaney, a rising star but one who is still unproven in the playoffs, and it is clear that The Captain has three drivers in very different places in their careers.  What might Blaney do to try to prove that he can win a championship?  How will Logano, already an aggressive racer, fight for a second title if he gets close?  And if Keselowski is really leaving Penske, how might he race his teammates if they stand between him and a second title?

Finally, there is the case of a resurgent Hendrick Motorsports.  After a few lackluster seasons, Hendrick’s team looks fast and well-balanced among its four drivers.  All of them have won in 2021.  William Byron is enjoying a breakout season, and Alex Bowman has already visited victory lane twice.

But for the past few weeks, Chase Elliott and Kyle Larson have been the stars of the Hendrick show.  Elliott won his first race of 2021 at Circuit of the Americas, with Larson placing second.  Then came the Coca-Cola 600.  Elliott was quick again, but he was no match for Larson, who ran away with every single stage and the race win.  On Sunday (June 6), Larson captured the checkered flag at Sonoma, a track where he had been fast before but never put together a complete race.  Once again, Elliott was second.

The battle between Elliott and Larson could go all the way to the championship finale at Phoenix Raceway.  If it does, it will be interesting to see how these new teammates will race each other.  Elliott may be a fan favorite and the defending champion, but Larson has quickly proven that he can match Elliott’s pace in Hendrick equipment.  Even on road courses, where Elliott is among the best in the business, Larson can win.  No doubt Larson is hungrier than ever to put a tumultuous 2020 behind him. Could he actually unseat Elliott as the top driver at Hendrick Motorsports?

Rick Hendrick himself often promotes the philosophy that he runs one team with four cars.  While that may be true, it has not always prevented egos from getting in the way.  Even Jeff Gordon and Jimmie Johnson, the greatest Hendrick drivers and usually the best of friends, had a rough patch or two that spawned from on-track incidents.  With a new generation of drivers on the rise, is there still enough room at the Hendrick campus for two superstars?

As Hendrick, Gibbs and Penske well know, having multiple competitive teams is a blessing and a curse.  Each of them has a vested interest in seeing everyone in their respective organization succeed.  But in the hyper competitive world of NASCAR, there can only be one winner each week, and one champion each year.  With so many Gibbs, Penske and Hendrick drivers all gunning for the championship, competitors and fans alike may find out where teammate cooperation ends and teammate competition begins.