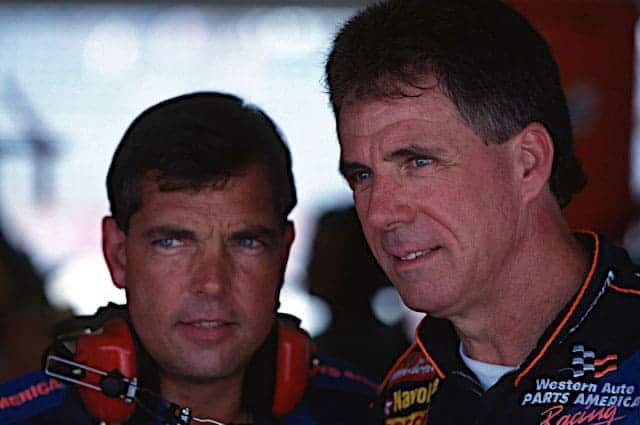 With less than a week until the inaugural Superstar Racing Experience event on June 12 at Stafford Speedway, the Camping World SRX Series announced today the addition of three veteran crew chiefs and their local track champion counterparts to their pit crew roster.

Prior to each race, all four leaders will be paired to three random drivers for the evening.

“Even though we’re shining a spotlight on 12 of the most accomplished drivers in racing every Saturday night in the Camping World SRX Series, racing is not an individual sport,” Ray Evernham, co-founder of the series, said in a release. “The driver is the quarterback, but the crew chief is like the head coach. He sees things the driver doesn’t, and he finds ways to get the best out of the driver by rallying a team around him. That’s always been a part of motorsports and it always will be.”

Hammond, Parrott and Beam all have a combined total of 77 NASCAR Cup Series victories between them, including crown jewel races such as the Southern 500, Coca-Cola 600 and the Daytona 500. The trio has sat on the pit box for NASCAR Hall of Famers like Darrell Waltrip, Dale Jarrett and SRX’s Bill Elliott.

“Mike Beam, Jeff Hammond and Todd Parrott – they’re all still very competitive people,” Evernham said. “They’ll have the unique challenge of making sure their team performs the best in a single race, but then again every week with a different group of drivers as they’ll also have their eye on the championship. And the local all-star crew chiefs will keep them on their toes. Each of them knows their respective racetrack better than anyone.

Local track champions Mike Christopher, Guy Forbrook, Keith Kunz, Tim Clauson and Scott Hansen will make one-time appearances on top of pit boxes in the 2021 season. The crew chief for Nashville Fairgrounds has yet to be announced.

The first SRX event will be live this Saturday, June 12, from Stafford Speedway on CBS at 8 p.m. ET.

Glad to see high quality crew chiefs will be calling the shots for our very high quality drivers
Can’t wait for series to get started. Go Awesome Bill!

I hope to see the race on CBS network not that streaming rip-off as previously announced.

I wouldn’t consider Hailee Deegan or the other youngsters in the series to be “used-to-bees.” For that matter, I believe Helio Castroneves is a quite recent champion of a major event, so he seems more current than anyone in any series.

Nonetheless, any series with Tony Stewart in it gets a hard pass from me.

AARP should sponsor this series.

A Different Steve
Reply to  Jake

Critical thinking skills are tough for some people.

Is this Ray’s attempt to replace Erin with Hallie?