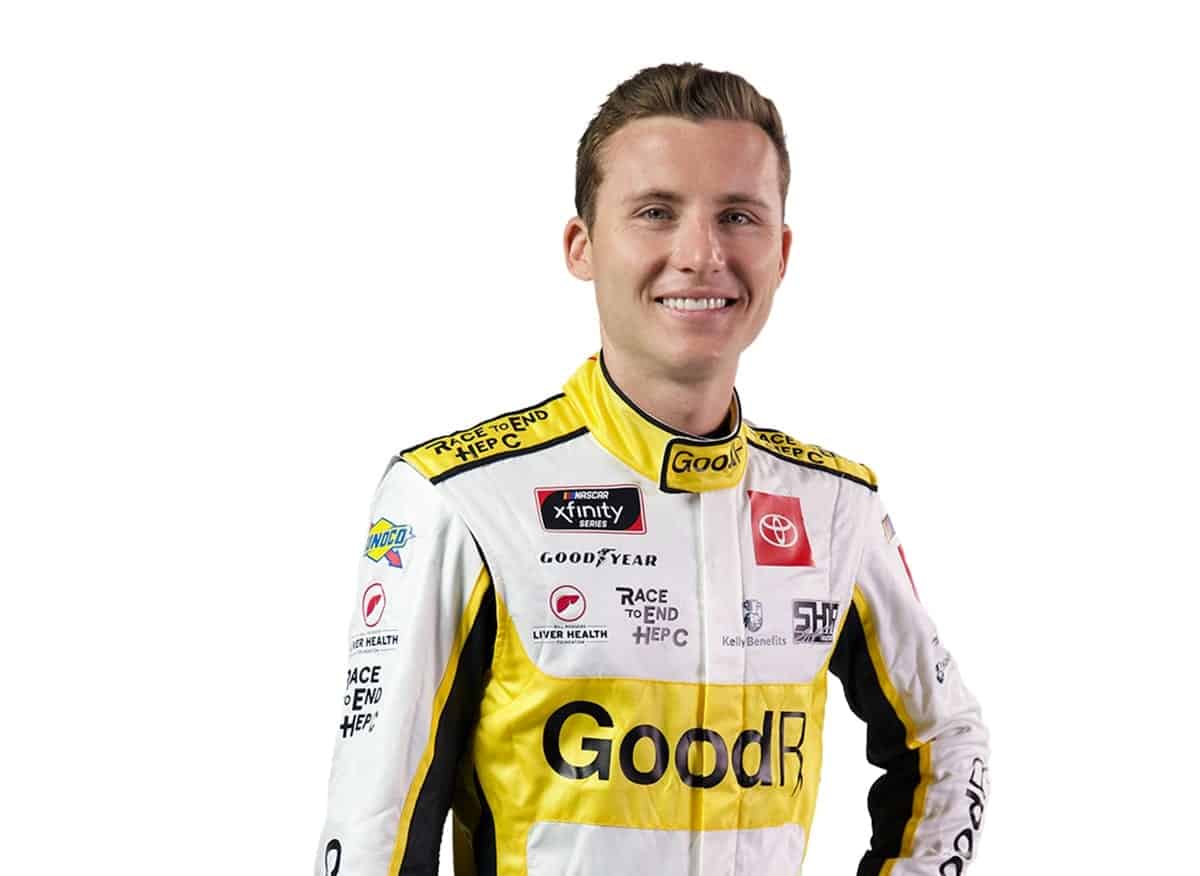 After not making a single NASCAR Xfinity Series start last season, Will Rodgers is back.

The four-time ARCA Menards Series winner will pilot the No. 26 Sam Hunt Racing Toyota Supra for multiple races this season, beginning at Nashville Superspeedway next month, a venue NASCAR is returning to for the first time in a decade.

“It’s a fairly neutral site where there won’t be as many home field advantages as some tracks are to more experienced guys,” team owner Sam Hunt tells Frontstretch. “With Will’s partners, it was just a good place. Gonna be a popular weekend, I think it was a home run as far as scheduling that first race.”

Rodgers brings GoodRx as one of his partners to SHR. But this partnership between Rodgers and Hunt, longtime competitors in the K&N Pro Series turned friends, is bigger than racing.

What Is Your Purpose? I’m proud to announce my partnership with @GoodRx & @orasure, supporting our first campaign to advocate for liver health! Race To End Hep C will help drive awareness, education, testing and treatment for Hepatitis C. #racetoendhepc #nascar pic.twitter.com/OWZCGC5ZyM

Welcome to Sam Hunt Racing, @willrodgers65. It’s an honor to have you, @liverhealthfdn & @goodrx on board with us for multiple races this season starting at Nashville. Let’s do this thing ?

At the age of 3, Rodgers was diagnosed with Primary Sclerosing Cholangitis (PSC), a chronic liver disease. He’s now healthy and lives with his condition, which is under control, every day. But has used his racing as an avenue to bring more awareness regarding liver diseases to the general public.

He started the Will Rodgers Liver Health Foundation (a 501(c)(3) organization) two years ago and is now intertwined with a new philanthropic campaign to raise awareness for hepatitis C (HPV): RaceToEndHepC.com.

I'm very excited to debut the Will Rodgers @liverhealthfdn this weekend at Utah Motorsports Campus! The foundation is all about filling a needed gap in the space and providing support for those who endure liver health issues. Go follow the WRLHF page! @liverhealthfdn pic.twitter.com/89HMx5FmV5

“We’re getting into this obviously using NASCAR as a platform and voice to millions of people,” Rodgers tells Frontstretch. “But what it’s really about is helping eradicate diseases like hepatitis C, something that’s been curable for almost a decade now. Yet millions of people suffer from those conditions.”

Rodgers realizes that the topic can be a bit taboo, especially with hep C being associated solely as a sexually transmitted disease, but is looking at this as an opportunity to help the public learn about the cures that are available and accessible to combat the virus.

“This is my time and this is my way to stand up and advocate for a cause that’s absolutely achievable for us to eradicate it.”

Over the last couple years away from the national series, Rodgers has kept plenty busy. While building up his foundation and working with SpaceStation Gaming in the eNASCAR Coca-Cola iRacing Series, he works part-time as an instructor at the BMW Performance Center. Not to mention he’s run in a handful of ARCA races and has also spent time coaching up-and-coming drivers on road courses like Hailie Deegan, Jake Drew, Trevor Huddleston, Jesse Love and others.

Hunt had no reservations of putting Rodgers in the seat despite his time away, citing his situational awareness and ability to do more with less as a main factor for slotting him into the No. 26.

“I’ve got full faith in him,” Hunt says. “Will’s a guy that I’ve really thought highly of for years dating back to K&N racing. How he carries himself and how hard he so works for each opportunity. I think that makes this whole deal exciting for me. Will has just worked so hard with these partners, pushing to race for a bigger cause, seeing it start to gain traction and have a platform to kick off with is exciting.”

Rodgers and Hunt have similar backgrounds in racing, both unceremoniously scratching and clawing their way for any opportunity whatsoever, just to be knocked back down time after time. The two relate to each other, and see a little bit of themselves in one another.

“It’s the reason why I picked (Sam Hunt Racing),” Rodgers says. “They put forth the effort. They show that even though there are not a lot of peaks (in racing) and there are a lot of valleys, they can get through it.”

Says Hunt: “It’s fun having someone like Will, someone that has similar experiences. You’re on the same page about a lot right off the bat. Situational awareness, expectations, what goes into this on a day to day level. A driver that’s been in the trenches his whole life, so he’s got an appreciation for the rest of these guys that live in the trenches.”

This will be Rodgers’ second ever NASCAR start in a Toyota, following the 2016 K&N West race at Evergreen, and he’s already making the most of it. Hunt and Rodgers have both spent time in the TRD simulator together getting ready for Nashville, as it’s both their first trips to the 1.33-mile D-shaped oval.

Hunt is honest about his perspective as a 27-year-old team owner, citing his mantra of “crawl, walk, run” of building his team, that’s been around since the end of 2019, up brick by brick.

“I’ll never say we have the best car in the garage, or we have the biggest team in the garage. I’m very honest with my business,” he says. “I think Will fits that mold very well and has gone through similar experiences throughout his driving career.”

Rodgers is no stranger bringing new companies into NASCAR, but to do so with GoodRx, a large, relatively new yet successful one that has helped millions of people with their medical needs has him “very, very excited to lead that charge.”

Part of his excitement regarding the new campaign was evident when he helped Hunt learn about the basics about HCV, which is a liver infection caused by HCV, and is spread through contact with blood from an infected person.

Rodgers pointed to new science emerging and standard sanitization practices that have been implemented in the 21st century as a major shift from HCV going from something that’s “weird to talk about” to something that’s just a part of the normal lexicon when it comes to illnesses.

“In the past 2-3 months (all the new information) was news to me,” Hunt says. “And it’s probably going to be news for a lot of other people, too.”

Says Rodgers: “What we’re really trying to do is break down the negative stigma and the barriers to help people understand that it’s not just potentially affected (via STD). You can be any age, of be of any gender, any race and it can happen to you. But there is treatment for it. If you take the necessary steps for education, testing and treatment, it is curable.”

While Nashville will the first race with GoodRx on the car, no other additional races on Rodgers’ schedule were immediately announced. Given his extensive road course background (two of his four Xfinity starts and all four of his K&N victories are on road courses), one could expect Rodgers to run at any or all of the upcoming events at Road America, Indianapolis Motor Speedway’s road course, Watkins Glen International and/or the Charlotte Motor Speedway ROVAL.

When asked about the future races Rodgers will run, Hunt said with a smirk that “there’s a good chance” they’ll be on road courses.

“He’s going to be able to tell us a lot that we may now even know,” Hunt says. “But he’s also humble about the oval stuff and the fact that he hasn’t been in the car. He wants to use Nashville to get up to speed, work with the guys, build up a notebook as a driver with our team, and get everybody on the same page to set us up for success.”

With race one of the Rodgers/SHR partnership on the horizon, both parties are looking at this as the beginning of something special, on and off the racetrack.

“I’m not looking to come here and just race, then walk right out the door,” Rodgers says. “I’m looking for a place where we can plant roots, be confident in the program we have not only on the racetrack but off. We can fight adversity together.”