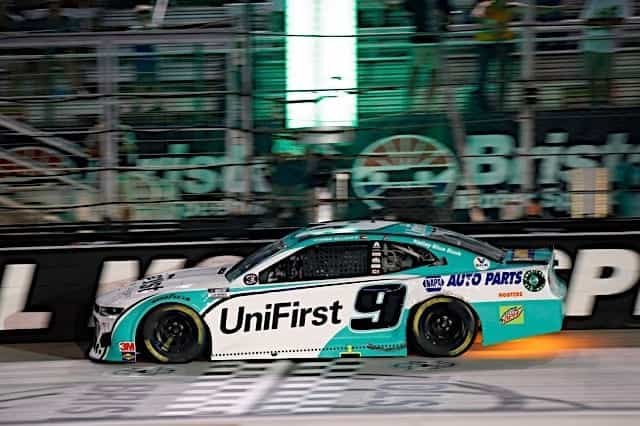 This weekend is the NASCAR Cup Series All-Star Race. which will run at Texas Motor Speedway for the first time. The race has seen a lot of procedural changes since its inception in 1985, and for just the third time in the race’s history, it will be held at a track other than Charlotte Motor Speedway.

Many feel that while the All-Star Race is still billed as a special and unique event, the race has outlived its usefulness. Others feel the exhibition is still worthy of a spot on the sport’s calendar.

Clayton Caldwell and Joy Tomlinson debate the All-Star Race’s stature in NASCAR and whether the race should still continue.

It’s funny this question has come up because just last year during the pandemic, I sat and rewatched every single All-Star Race to try and figure out what the heck happened to a race I once loved. The All-Star Race used to be an event I looked forward to, but now it’s something that NASCAR should just do away with.

There are many reasons I feel this way and many who are to blame for the downfall of the once-beloved contest.

One thing that has changed is the uniqueness of the event. I blame this part on NASCAR. That’s what made the All-Star race so great for so many years: the fact that the race was not only exciting, but was something we didn’t see all year.

It was a change of pace from the long, patient 600-, 500- or 400-mile races in NASCAR’s top division. Races in NASCAR’s premier division could see extremely long stretches of green-flag runs. There was a combination of endurance, tire management, talent, patience and a car to last that long was what made you a winner in the Cup Series. There was also the mind game of knowing when to strike. The All-star Race was a break from that.

Since we’ve introduced stage racing, the racing has changed completely. No longer is it the patient, endurance racing we’ve seen from the past. It’s now a race where being constantly aggressive and getting into clean air is a key factor. Sure, the points races are still a longer distance than the All-Star Race, but that’s about it. The mindset is the same and that’s why the All-Star Race no longer feels special. It just feels like another event.

NASCAR deserves some blame for the format as well. It has constantly changed over the last 20 years or so, and that was even more prevalent when Sprint/Nextel came into the sport. I believe they tried too hard to change the All-Star Race and created a revolving format that confused fans, media members and the NASCAR world on a yearly basis. Eventually the race turned into a gimmick.

Look at this year’s format. Does anyone even know this year’s format or can sum it up for me in a sentence or two? The format is ridiculous, confusing and not even remotely fun. They’ve taken all the strategy and simplicity away.

Can you imagine the MLB All-Star Game having different rules every single year? Can you imagine them creating an event where all the fans, players, coaches, managers and media members are confused by the rules? After a while, wouldn’t the fans look at it as ridiculous?

How do NFL fans treat the Pro Bowl? The Pro Bowl has no consistency. It seems like the rules change every year for that game as well. The history of the Pro Bowl and its legacy have been destroyed. The same can be said for the All-Star Race.

They have now included not one, not two, not three but four drivers from the Open to transfer into the All-Star Race, with drivers who win all three stages in the Open and the fan-vote winner all transferring in to the big show.

This year, 21 drivers will run in the All-Star Race. There are 36 full-time teams. That’s nearly 60% of the field making the race. All the race really does is remove a few backmarkers and that’s it. The rest of the teams make the show.

However, NASCAR is not alone in the fall of the All-Star race. The series sponsors deserve some of the blame as well.

When NASCAR created the All-Star Race, the prize money was $200,000 to the winner. It increased to $500K and then soon followed to $1 million. When Darrell Waltrip won NASCAR’s first All-Star event in 1985 and took home the $200k prize, it was a significant chunk of change for a team that may have only had $500k worth of sponsorship for the entire season.

As the cost of racing has increased dramatically over the last decade or so, the winner’s purse hasn’t changed. It’s been $1 million to the winner for almost 20 years. Nowadays the teams are getting that money for about three races worth of sponsorship. The desperation and need to take home the biggest prize just isn’t there anymore. The title sponsor has refused to put up more than $1 million.

All in all, the All-Star Race is losing its lore. Winning this event is not as big of a deal as it used to be. There’s nothing unique about it anymore. It’s time to make it a points race and appease everyone. – Clayton Caldwell

The All-Star Race hasn’t outlived its purpose. Yes, the rules are a lot different this year, but that doesn’t mean the extravagant event should end. The race features the current Cup Series stars — ones that won a race last year or this year, past Cup champions and past All-Star Race winners.

And while it is at a different racetrack once again, it could be the start of a new tradition for this generation of NASCAR fans. Last season, it was at Bristol Motor Speedway where Chase Elliott dominated en route to the victory. NASCAR tried something new, adding underglow to the cars and pushing the numbers back on the door panels, even during the COVID-19 pandemic.

You can’t really fault NASCAR for trying, can you? This year, the race was moved once again to Texas and again features something new: its format. The main event has six rounds with inversions after the first three segments. Round five features a lineup set by each driver’s average finish from the first four segments as well as a pit-road contest.

It’s commendable to try something off-the-wall, as well as awarding the fastest pit crew in round five. NASCAR recognizes the hard work each team does throughout the year and wants to give them something extra for their quick stops. This part wasn’t as publicized as much as what the race winner receives, but it still may bring in newer fans to the sport.

Also, the All-Star Race is a major highlight in some drivers’ success, according to Team Penske’s Joey Logano.

“The All-Star Race is something you want to have on your resume,” Logano told the Fort Worth Star-Telegram. “You think about unique, special races — the Daytona 500, Coke 600, Southern 500, Brickyard 400 — the All-Star Race is in there. Those races are unique. They’re special. I think that’s one you want to check off when you look at our sport. It’s definitely a bucket-list type of race.”

If this event truly is that high up on a list that drivers hope to accomplish, then why end it? They’re the ones racing.

Though I did enjoy the traditional All-Star Race that was held at Charlotte Motor Speedway each year from 1987-2019, times are changing. We need change once in awhile so we can learn and grow in a new environment, and this race is no different. What doesn’t work or isn’t received as well, NASCAR can make adjustments for next year with the Next Gen car. – Joy Tomlinson

Honestly the All-Star would be a great event to hold at track not on the schedule… how about Bowman Gray Stadium or the All Star race at Stanford or Road Atlanta.