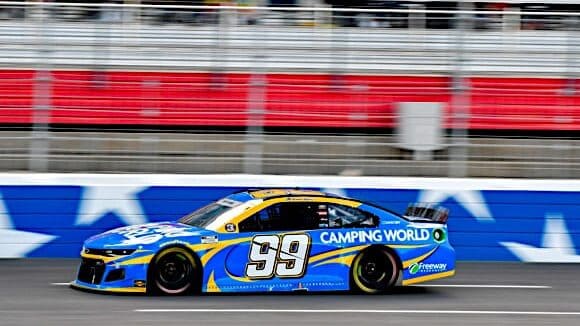 “To start working on the long-term success and long-term viability of Trackhouse we have to think about scale and I think that being that small upstart team, that mom-and-pop shop, our 15 guys or whatever, that’s only going to go so far if we really want to grow into a company and compete for wins and championships in the sport down the road,” Marks told SiriusXM. “So being able to scale the operations is of utmost importance.”

It should be noted that Trackhouse and the No. 99 driven by Daniel Suarez is essentially a third car for Richard Childress Racing, with the car prepped at RCR’s shop.

“A two-car team in 2022 is very much in the picture and something that we’re working hard on right now,” Marks said. “We’re starting to communicate with other drivers in the sport and other stakeholders in the sport to see what the landscape looks like and start to build a plan around that.

“But Daniel and (crew chief) Travis (Mack) and everybody on this 99 team are doing a great job and I’ve got some great people working for this company so I can kind of take a bit of a step back from the day-to-day and just work on bigger picture stuff and that’s what I’m focused on is the expansion of Trackhouse.”

According to Kurt Busch, he’s one of the drivers Trackhouse has been communicating with. Busch spoke with SiriusXM NASCAR Radio about what’s in store for him in 2020.

“I’m wide-open right now with my contract, I don’t have anything for next year,” Busch said. “COVID delayed the launch of the Next Gen car, and why I say it that way is, I’m a racer. I grew up racing any kind of car, anytime, any place and this is my 21st year. Why not go another? Why not go out there and challenge myself with something new with the Next Gen car?

“And so talks are gonna start here at Ganassi first, I respect Chip, I respect this team. We’ll talk with Chevrolet, Monster Energy, they have a big say in what’s going on. As a sponsor they’re out there to win, and to win, and to win, that’s all they want, and we’re not doing that right now. So we’ve gotta sort through that.

“But yes, other teams are calling, 23XI [Racing], Trackhouse, there’s just all kinds of options everywhere.”

"Talks are going to start here at @CGRTeams first. I respect Chip and I respect this team."

Two weeks ago The Athletic reported that 23XI Racing, which currently fields the No. 23 car driven by Bubba Wallace, was also looking to expand its organization with Busch as the top candidate for a second car.

Busch has competed for CGR since 2019, earning two wins, 13 top fives and 40 top 10s in that span. He has 32 Cup victories in his career since 2001: 14 with Roush Fenway Racing, 10 with Team Penske,  six with Stewart-Haas Racing and two with Ganassi.

He currently sits 18th in the point standings.

So if they add a second car, will it be the fourth Childress car?