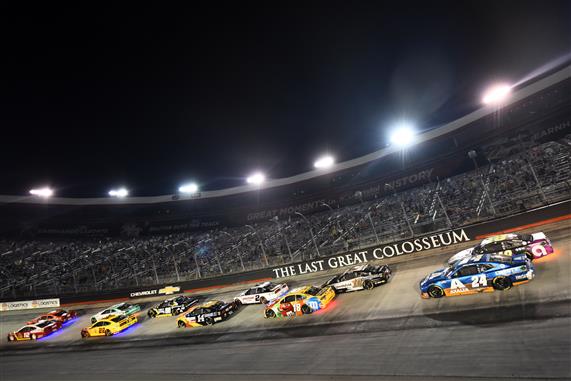 The All-Star Race kind of feels like The Clash to me: unnecessary and lacking luster. What should NASCAR do with it? – Brodie L., Fargo, N.D.

I miss the electric feel of the event. When fans came down to Charlotte in droves and visited team shops, organizations had fan days, pit crew competitions were a thing, the $1 million felt like it was significant … those days feel so far removed.

The pit crew competition was SO damn fun and I still miss it dearly. Wish it could return in some form. https://t.co/mEnxzd1TVL

It feels like a different era (well, I guess it is) of the All-Star Race being just that: a race. No stages, no package changes, no inverts, no random draws, no mandatory stops. Just line ’em up, race and go home. Could you imagine?

Honestly, I don’t think I can. That’s just a product of NASCAR racing and society in 2021. Something needs to be different, needs to be headline-grabbing, needs to be short enough to keep people’s attention. Hence the 2021 rules for the ASR (which I’m not going to try and recite).

It also comes at a strange time. More than half the regular season is over, the summer stretch is in full force, the venue is, well, undesirable in terms of the on-track product and it seems that there’s just no hype for the event itself.

The ASR should be something that speaks for itself: a one-off race that gets drivers and fans alike excited. But in recent years, all of that is lacking. How to fix it is the (no pun intended) million-dollar question.

If I had it my way, I’d have it cycle through multiple local tracks in the greater North Carolina area, allowing minimal travel for teams (and less of a financial burden) and the potential to race at local short tracks that NASCAR deems race-ready (from a safety and competition standpoint).

How many wins is realistic for Kyle Larson this season? – Particia I., Elk Grove, Calif.

I mean, realistically speaking, he can win all 20 remaining races. It won’t happen, but that’s how good Kyle Larson is right now.

With four more road course races, conventional wisdom would be to pencil him in for at least one win there, given his speed at the Daytona International Speedway road course, Circuit of the Americas and Sonoma Raceway this season. At least one or two more intermediate victories, given his results at those tracks thus far, and probably one at a short track/superspeedway.

So probably at least four more wins. But that seems so low, doesn’t it? The No. 5 team was in their own stratosphere on Sunday (June 6) at Sonoma. And they realistically could have won the last six (!) races.

That’s a month and a half of races that Larson has or easily could have won if circumstances played out just a tad differently. Hendrick Motorsports clearly has more horsepower than their competition, and their driver stable is packing a punch every single week.

However many wins Larson does earn this season, you can just add them to the list (an already extensive one at that). All “Yung Money” does is win, and the world is seeing it on display so far this season.

-What to do with the ASR?
If the plan is to run the dirt configuration at Bristol next year, per Marcus Smith and SMI, then perhaps that may be the venue of choice to make the All-Star a true spectacle again. Also make it a charity event, with an equal amount of the winners purse going to that drivers’ cause.

-How many races will Larson win?
I’m going with 9. A final four spot is all but assured.

I like the all star dirt track idea. The all star race isn’t going away anytime soon (or ever), and you might as well give a gimmick race a gimmick track.

Plus we can have two traditional Bristol races back on schedule

A Different Steve
Reply to  Jake

I like this idea ONLY IF they also keep the 2 pavement races at Bristol. Sacrificing a regular oval race there with a dirt race leaves a sour taste in my mouth considering how very few short tracks are on the schedule as it is.

Can they recreate the pit road competition…on a real pit road? If they use Bristol it could work!

I think they should make it a true “Throwback” race. Give the manufacturers a race in which factory produced cars (with only safety gear and racing tires added) get to duke it out just like they did 60 years ago. For a bit of parity, you’d have to make the Mustangs and Camaros run the V-6 configuration unless Toyota starts putting a V8 in the Camry. Race at any of the tracks that are a mile or less where speeds won’t get too crazy/unsafe. Bring back “Win on Sunday, Sell on Monday!”.

For the pit crews, go old school and give each crew 2 4-way lug wrenches instead of air guns to change the tires.

Burn it! Burn it to the ground. And never look back.

I agree. 3 extra “all” stars race their way in and fans vote for another one. Look through the list of those racing the “3” open races, who is driving the best equipment !

Wreck him in the first open, mess Nascar’s plans up.

They’ll let him run his backup car after he gets the “fan vote.”

What to do with ASR——-CANCEL. waste of time and talent Give teams a week off. I’m certainly not going to watch.

Get rid of it,… Period. We definitely need more short tracks to race at, not more Road Courses. I think the all-star race has run it’s course…