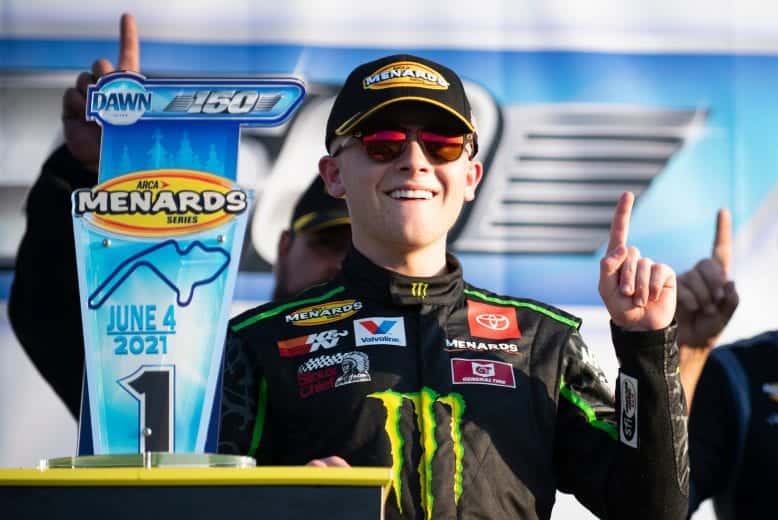 Stop me if you’ve heard this before: Ty Gibbs won an ARCA Menards Series race.

While he is currently one point behind leader Corey Heim in the points, Gibbs has led 525 of the 750 laps contested in the main ARCA series this season. Yes, Gibbs has astoundingly led 70% of all the laps.

What is the next stop on the ARCA circuit? Pocono Raceway, where Gibbs led 65 of the 80 laps last year en route to victory. If Gibbs wins, it will be his fifth straight main series win. Tim Steele was the last driver to achieve that feat in 1997 en route to winning that year’s title.

Other than his competitors going faster, can anything be done to challenge Gibbs?

ARCA officials could add intrigue to the Pocono race with a bounty on the 18-year-old driver.

Last year, Camping World CEO Marcus Lemonis and Cup Series driver Kevin Harvick placed a bounty on Kyle Busch in the NASCAR Camping World Truck Series. The bounty incentivized multiple Cup drivers, including eventual winner Chase Elliott, to compete in multiple races to earn the reward. If the bounty added interest in the Truck Series and elevated the competition level, why can’t a bounty on Gibbs be successful in ARCA?

Before delving into the specifics of a bounty at Pocono, let’s establish some rules for this bounty so Gibbs isn’t intentionally wrecked on lap 1.

– If more than one driver bests Gibbs, the top finishing driver earns the bounty.

– If Gibbs is involved in a wreck, anyone also involved in it is ineligible to receive the bounty.

– If Gibbs finishes with a DNF due to a mechanical problem, the bounty automatically rolls over to the next race. It wouldn’t be Gibbs’ fault if his car had a problem out of his control.

– Should Gibbs wins the race, he too collects the bounty.

Due to its size, drivers competing in the ARCA race at Pocono must be 17 years old. As the next race on the schedule though, Pocono presents an exciting opportunity for a bounty on Gibbs. The ARCA race is the first of five races at the track that weekend. Teams don’t have to divide their resources between two tracks.

Because there are no practice or qualifying sessions for any of the three NASCAR national series, the 80-lap ARCA race is an opportunity for drivers, especially newbies to Pocono, to gain valuable track experience.

Truck Series rookie Carson Hocevar has never competed at Pocono before. Currently 10th in the point standings and battling for a playoff berth, it would behoove Hocevar to turn laps at the track before taking the green flag in the Truck Series race. Would an added bounty make it worthwhile for Niece Motorsports to field an entry for Hocevar?

Likewise, GMS Racing Truck Series rookie Chase Purdy has struggled this year. He sits 24th in the point standings. He competed twice at Pocono in ARCA, finishing ninth and third, respectively. In his Truck Series start there last year though, he finished 21st. GMS just signed Daniel Dye to drive its ARCA car in eight main events; would the team field two entries, one for its other ARCA driver Jack Wood as well as one for Purdy to regain some confidence and chase the bounty?

David Gilliland Racing fielded two ARCA entries in the first two main races this year. Then Taylor Gray unfortunately was injured in a car crash. Meanwhile, the two DGR Truck Series drivers Tanner Gray and Hailie Deegan are both below the playoff cut line. Gray has failed to score a top-10 finish in his two starts at Pocono while Deegan finished ninth in her lone ARCA start there last year. As DGR seeks its first Truck Series win, extra track time would help Gray and Deegan.

A bounty could also lure some ARCA teams to field an extra entry as well. While Venturini Motorsports’ Pocono lineup will feature Heim, Drew Dollar and Derek Griffith, would the team be willing to field another entry for Gracie Trotter or Truck Series rookie Chandler Smith? The added winnings from a bounty might make it worthwhile for the team.

Bret Holmes Racing is slated to field an entry for Sam Mayer. If the bounty amount were substantial, team owner Holmes could field a second car for himself to remind Gibbs that Holmes is the reigning ARCA champion.

A final advantage for a bounty on Gibbs at Pocono is the financial aspect. The race winner will only receive $10,000, with more possible from contingencies. Comparatively, Berlin Raceway, a track on the main ARCA schedule this year, pays $10,000 to the winner of its marquee Money in the Bank 150, a 150-lap super late model race. As ARCA crossed the 1,500 all-time race threshold, its purses are still an area of criticism. Offering a bounty adds more winnings to the race, desperately needed to this series.

Who then will rise forward and offer the bounty? While one of ARCA’s corporate partners could step up to offer it, this country is recovering from the COVID-19 pandemic. Instead, how about a fan-driven bounty like a 50/50? Fans could contribute to the bounty, which would allow it to grow, and give those fans a reason to watch the ARCA race at Pocono. Even if there is a bounty though, Gibbs will be tough to beat.

Oh sure! Give Reverend Joe twice the money. Who else would anyone bet on except maybe a family member or friend? Rhetorical question.

The power of Gibbs engineering has taken the sport out of watching ARCA racing. It’s even more depressing to watch that spoiled punk gloating post race. If he had his way the Dinger would have been disqualified in the Xfinity race for dirty driving. Just sooo into his bloated ego. Disgusting. Truly a disgrace to his successful Grampa.

Of course, I hope all know the car used had a Chevy designed “Ilmor’ engine as do all cars in ARCA and also all Toyotas AND Trucks in the Truck series thanks to NASCAR’S GM biased/favoritism

ARCA racing is so boring now with Ty Gibbs that I have quit watching it. And from what I am seeing in Xfinity racing, I won’t be watching races there that he is in. I keep saying there is something funny going on with the Gibbs cars in both series.

Everything I know about bounty hunters is that the thief being hunted does not get the bounty if he doesn’t get caught.

ARCA’s a mess. But I’m all for anything that might make that whiny brat cry on TV.

Enjoy the talent. ARCa doesn’t have much.