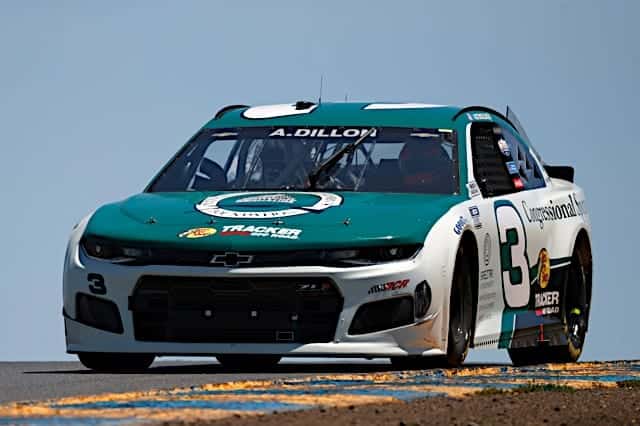 Austin Dillon has faced a lot of criticism since he hit the NASCAR scene full time in 2010.

Eleven years, two lower-tier championships and a couple of crown-jewel NASCAR Cup Series victories later, Dillon is earning success on a regular basis behind the wheel of the famed No. 3 Chevrolet.

Dillon has an average finish of 13.0 through 16 races in 2021, which would mark the best of his career if he manages to maintain that over the next 20 points races. He’s also posted one top five, six top 10s and 14 top 20s in that span, his worst finishes being 21st at Bristol Dirt and 34th at the Daytona International Speedway road course.

So why point to Dillon now?

Dillon and his Richard Childress Racing team put their new-found resiliency and focus on display Sunday (June 6) at Sonoma Raceway.

The No. 3 car started sixth and essentially ran there for the entire 20-lap first stage, but the alternator quit early, draining the battery quickly. That meant a battery change and going under the hood on Dillon’s Chevrolet under the stage-break yellow, plummeting him back to 36th to start stage two.

After working his way back to 21st to end the stage, the team was forced to change batteries yet again and restarted the final stage 35th.

The previous iteration of this team likely would have fallen apart. FOX Sports 1’s “Radioactive” segments on NASCAR Race Hub have featured plenty of meltdowns over the years from Dillon, his crew chief and/or his spotter.

That’s not this year’s RCR.

Headed by the return of Vice President of Competition Andy Petree, who won two championships as Dale Earnhardt’s crew chief, Dillon’s team is noticeably mentally stronger and more able to bounce back from adversity than deteriorate from on-track setbacks.

Dillon worked his way through the field to finish 13th, maximizing what could have been a disastrous day as he sits 12th in points with 10 races left in the regular season.

Today was a grind @RaceSonoma pic.twitter.com/2S3kZLLKIC

“Just had to grind it out, battle it out,” Dillon said in a post-race Twitter post. “Kept losing track position and fighting hard all day. I am dehydrated and [have] a long flight home, but can’t thank all the guys enough. Good Lord was looking after us today.”

The power under the hood was looking after them too – albeit not his alternator.

It’s no secret that Hendrick Motorsports – the unquestionable dominator of NASCAR right now – combined its engine efforts with that of RCR and its ECR engines late last season. In fact, it was at the Southern 500 that began the playoffs in September at Darlington Raceway that Dillon appeared unusually fast, following that up with perhaps the most complete performance of his career one week later at Richmond Raceway.

See also
Up to Speed: Don’t Count Richard Childress Racing Out of the Playoff Picture

But that engine program is paying significant dividends across the board, it seems. According to Freddie Kraft, spotter of Bubba Wallace‘s No. 23 Toyota and co-host of the Dirty Mo Media podcast Door Bumper Clear, Chevrolet is producing more horsepower than anyone on the circuit right now.

“Talking to some people this week after the Coke 600, the rumor going around is 16-HP difference between what the Chevys have and what everybody else has,” Kraft said on the latest episode of the podcast.

That sort of advantage cannot be understated, particularly as Hendrick continues to rack up win after win with an absurd four straight top-two finishes.

But regardless of what’s under the hood, talent behind the wheel still means something. That’s what makes Dillon’s performance so far so notable.

Sure, Dillon won titles in the NASCAR Camping World Truck and Xfinity series. His talent has been on display for years. But not many people have ever pointed to him as a true contender for top 10s and top fives week in and week out.

That narrative started to shift toward the end of last year with those impressive runs at Darlington and Richmond. Those were just two races, though, which we all know isn’t a significant enough sample size.

But midway through 2021, that sample size is plenty big enough to know now he can legitimately fight at the front of the field on a weekly basis.

The most significant tell moving forward will be whether he can break into the next tier and contend for top-five finishes regularly. To do that, he’ll have to find a path through the Hendrick powerhouse, just like everyone else.

He is more equipped to do that than ever before, though. Now it’s just a matter of putting the pieces together a little more consistently.