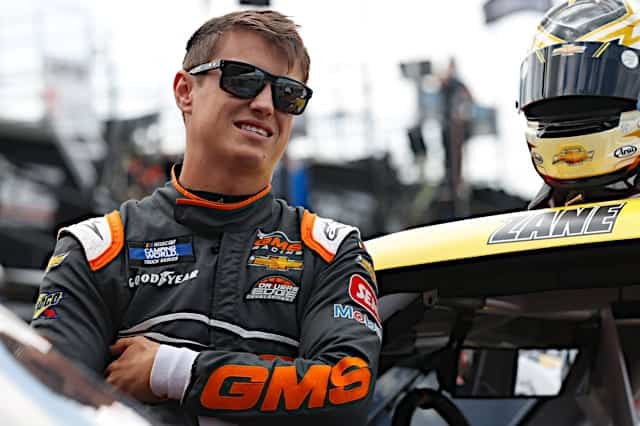 Gaulding took the lead from polesitter Kelly Earnhardt Miller and held on during a green-white-checkered finish to win $10,000 for her charity, Lake Norman Humane.

Thirteen women raced in the event with their husbands and boyfriends sitting as crew chiefs. However, Gaulding was the class of the field all weekend, posting faster lap times than everyone, including Zane Smith.

Thanks to all our drivers and partners – @USLegendCars @NASCAR @NASCARONFOX @TXMotorSpeedway & @iRacing for helping us bring back the Dash! pic.twitter.com/iKK2i8pEd0

The 32-lap race started off relatively calm, with a few spins early, but the drivers would continue on as the damage feature was turned off. Christopher Bell’s wife Morgan and Taylor Gray’s girlfriend Kennedy Gaulding got together in turn 1.

Later on, the 2017 Better Half Dash champion in real life, Jennifer Self, got turned around. She quickly continued on, though, as did Megan Smith (Regan Smith’s wife) and Morgan Bell who crashed together in a turn.

Another quick racer was Julia Piquet, girlfriend of Daniel Suarez; Piquet moved up through the field all the way into second place at one point.

Then chaos ensued coming off of turn 3.

BETTER-HALF BIG ONE. AND @tammymrice LOVES IT.

A couple of cars got together in the turn and couldn’t get going again before more piled in, causing the caution flag to fly with three laps remaining.

On the restart, Miller and Self crashed as soon as the green flag dropped, allowing McCall Gaulding to get a good jump on the rest of the field. She never looked back and won the trophy and prize for her charity.

Very proud of @McCallKelli. Winner of the better half dash! pic.twitter.com/R072BoNVbk

i remember when they use to have the better half dash and the women raced legend cars on the oval at the charlotte front stretch.

racing is all a joke now.