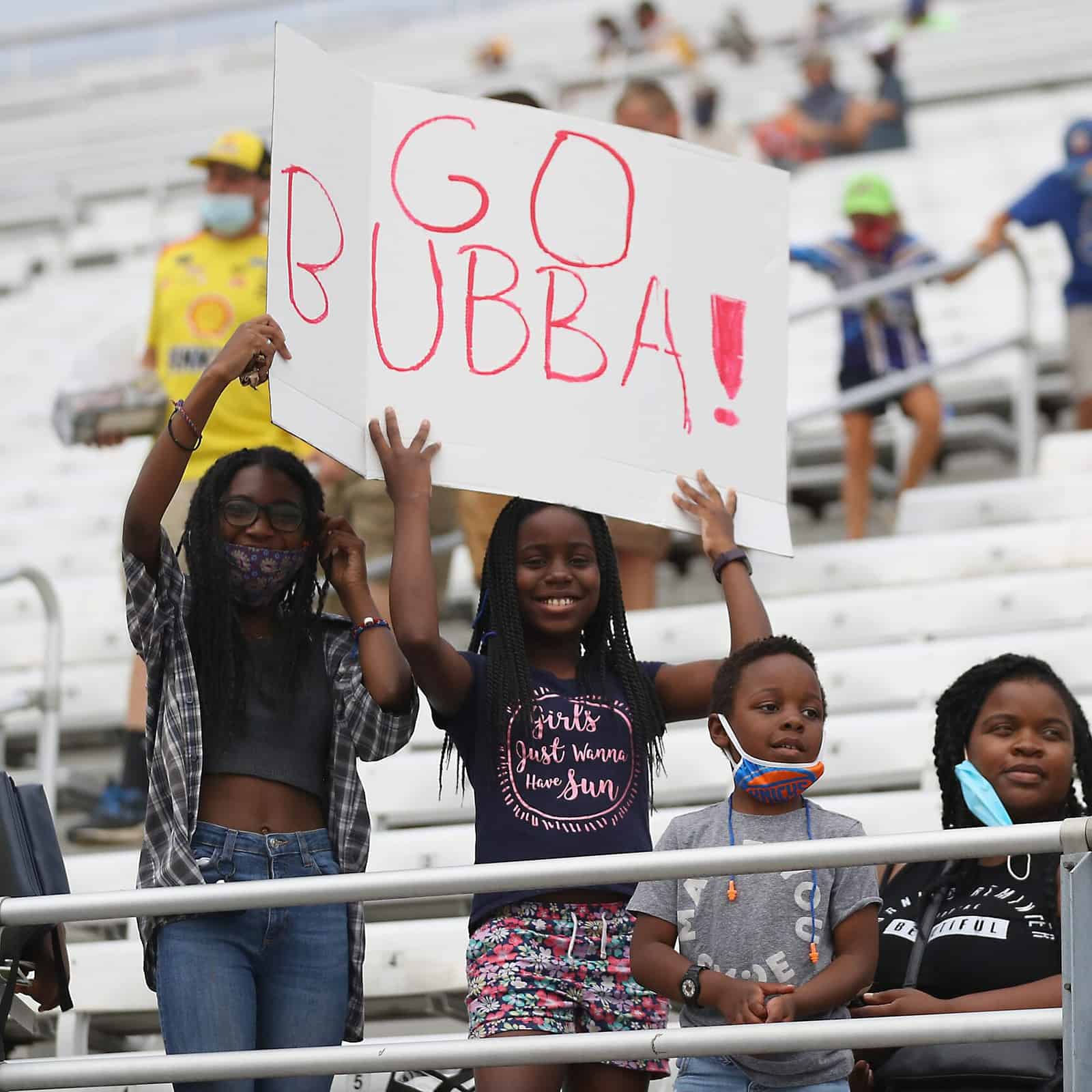 Was it worth it?

A year later, was NASCAR’s condemnation and banishment of the Confederate flag on June 10, 2020 worth the short-term controversies, confusion and the “Defund NASCAR” banner seen flying over Talladega Superspeedway?

Was it worth alienating hard core fans in an effort to invite an audience of minorities that previously wouldn’t have given the sport the time of day?

If you ask Renae Mitchell, Bria and Vivian Hedrington and her daughter Rita, it definitely was.

In a tumultuous year, NASCAR became a safe harbor for them and something resembling a family.

But their stories are still just anecdotal.

Evidence of how NASCAR’s embracing of the #BlackLivesMatter movement at a critical time for the country can be found in cold, hard numbers.

Albeit, numbers provided by NASCAR.

At the end of 2020, the social listening tool Zoomph came to NASCAR with some of those numbers.

“They’re like, ‘That’s pretty staggering for any brand to see that much kind of growth in a defined time period,'” NASCAR Chief Marketing Officer Pete Jung told Frontstretch this week. “An old person, like me, like a Gen X, that was flat, basically. If you looked at other sports properties,  they just didn’t see that much of a gain. …  So a lot of our growth is just coming from younger (groups), and just by virtue of younger, your propensity to be multicultural is significantly greater than older demographics.”

Stats provided to NASCAR by the custom brand tracking study at Directions Research in October 2020 backed that up.

The study, which tracked the U.S. population and those who consider themselves to be a NASCAR fans, determined that newer NASCAR fans are more ethnically diverse. Of new fans to the sport in the last three years, 23% are Hispanic, 17% Black and 10% Asian or Pacific Islander.

The study also measured how that audience perceived NASCAR taking a stance on social justice issues in 2020.

The zero- to three-year fans surveyed were eight times more likely (than unlikely) to say NASCAR’s stance on social justice improved their opinion of NASCAR.

In 2020, the market research company found that among Gen Z, NASCAR was ninth among the 20 fastest growing brands for the group.

In January 2020, NASCAR polled at 13%. By November, it was at 21% for an increase of 7.9. That rate of growth, not the overall number, was better than brands like Pepsi, ABC, United Airlines and Snapchat.

It’s information like this that likely makes officials like president Steve Phelps comfortable with the decisions made by NASCAR last June and in the year since.

“Like any brand, any franchise out there, if you’re not getting new people into the franchise, particularly young people in this case, your brand is going to die,” Phelps said in April when NASCAR announced a new partnership with the Boys and Girls Clubs of America. “I think what you’ve seen in NASCAR over the last year, based on some of the stances that NASCAR has taken, the diversity, equity, inclusion space, young people want to participate in this sport.

“It’s not that we didn’t have efforts before. We’ve had a lot of efforts in youth. But I think as we’ve opened up, as I kind of think about the lens of this, to include people of color, younger people who really probably didn’t think that NASCAR was for them. I think now you see that this is for them.”

See also
Dropping the Hammer: NASCAR Says 'No' to Being Part of Voting Rights Debate

Phelps said he believes the banning of the Confederate flag “opened things up” and “changed our sport and the face of our sport forever.”

“I’ve had the opportunity to speak to athletes, celebrities, regular people about the banning of the flag,” Phelps said. “Really the common theme was, ‘I just didn’t think this sport was for me.’

“I guess intuitively I knew that, right, because you’re like, ‘It just doesn’t feel right for me.’ And now when you hear people talk about that saying, ‘I can’t wait to go to a race, it will be my first race,’ that to me, I think, is really exciting.

“I just think we are in a different place than we were. That part is fantastic. I think we were in a situation where the sport was growing in 2019 … but until the banning of that flag, it was really about just continuing to be where we were with the same group of people. I think the thing that’s most exciting for me is people understanding the NASCAR community in the sense of family and community that exists as part of NASCAR. I don’t think people saw that before.”

On June 16, Brandon Thompson was named NASCAR’s vp of diversity and inclusion, a brand new position meant to promote diversity throughout the industry. (Frontstretch will have an interview with Thompson on June 15.)

In February, Toni Breidinger became the first woman Arab-American driver in NASCAR by competing in the ARCA Menards Series.

Six days later, NASCAR was silent when Derek Chauvin was convicted of murdering George Floyd while most other sports leagues made note of it. But on May 25, one year after Floyd’s death, it made sure to honor him.

This month alone has seen moments that may not have taken place 14 months ago.

On June 1, NASCAR commemorated its partnership with the Trevor Project as part of Pride Month.

NASCAR is proud to support the important work of @TrevorProject this month and all year long.

If you're struggling right now, remember that you're not alone. The Trevor Project is always here to help LGBTQ young people. For more information: https://t.co/MlCZsV6BWy#PrideMonth pic.twitter.com/NfoaubObUn

On June 6, it backed that up showing its support of the CommUNITY Rainbow Run, which celebrates inclusion and honors the lives taken in the Pulse Nightclub shooting on June 12, 2016.

On June 2, when the iRacing Pro Invitational Series held an event on the virtual streets of Chicago, Austin Dillon’s No. 3 car was sponsored by the LGBTQ+ employee networks at Dow.

Partnership & collaboration are driving us toward a more diverse, inclusive, and equal world.

Trackhouse’s No. 99 Chevrolet also had a decal of note. It honored the lives of the 215 Indigenous children whose bodies were discovered in a mass grave in Canada last month.

Racing in @NASCAR is an incredible privilege. Its important to recognize and bring awareness to those that don't have these opportunities. Today we recognize the 215 Tk'emlúps te Secwépemc First Nation souls lost in Canada. pic.twitter.com/2kjGs2pTNZ

In April, in the wake of the police shooting of Adam Toledo in Chicago, Wallace expressed that he was “proud” of the efforts made by NASCAR toward social justice and inclusion.

“Showing those efforts is big and we can’t stop, we’re not stopping. We’re not letting off the gas or anything,” Wallace said. “This is a never-ending battle, as we see each and every day, but we’ll try to do our part. And hopefully, one day society will wake up and treat each other with respect.”

For Phelps, the sanctioning body’s efforts toward inclusion that would make it feel like a safe place “needed to start at home, it needed to start with us.”

That has included efforts to diversify NASCAR’s workforce, plus sensitivity training, unconscious bias training, as well as employee resource groups and a diversity council.

“We’re not done,” Phelps said. “This is a journey that we’re on. It really is about action.

This story is the last in a five-part series looking back at the events of summer 2020 and examining their impact on NASCAR a year later.

A supplemental piece will be published on June 15 on Brandon Thompson, NASCAR’s vp of diversity and inclusion.

Lets hope that the majority of people in this country of over 330 million people arent buying into this.

Interesting that FS is not moderating the blatant racism of the comments posted here by the anti-Black segment of the NASCAR fan base.

Not anti black at all. I am anti BLM and Antifa. And you?

I’ll drink to that jd. Thank you.

One thing this series of articles has done is to flush out the racism that still pollutes the NASCAR fan base and is so clearly on display in the hatred expressed by so many comments here. NASCAR’s leaders may be trying to do the right thing, but the anti-Black sentiment is real among too many fans.

I’ve mostly stayed out of this, but now that the series is done, please allow me to comment…

I have no problem with this series of articles. I don’t agree with the “woke” BS, but NASCAR has a history of racial bias. Now, they are trying to be seen as more inclusive in order to attract more fans. I agree that’s a worthy goal even though I don’t like all their methods. And the whole Bubbagate noose issue was a prime example of how not to handle a suspected racial incident. That’s on NASCAR and Steve Phelps.

I’m critical of some of the commenters to the series. A lot of stereotypical political blather. Apparently we can’t even discuss the issue without name calling and insults. Such is the state of personal relations in this country. We’re all fans of the sport yet we acted like the Hatfields and McCoys here. That’s a damned shame. Nobody is gonna change anyone’s political leanings with a comment on a racing website.

OK everyone, enough. Several comments were removed from this article today and we will be more aggressive in moderating going forward.

We will not tolerate personal attacks, hate speech, offensive or inappropriate language, or anything our staff considers detrimental to the community. You are welcome to disagree with article authors or other commenters, but the tone of those discussions will remain civil or those comments will be deleted or edited.

Thanks to those who have made thoughtful contributions to the discussion.

With respect Tom, many of us love the site and love to talk racing on here – provided the subject is racing. If you decide to publish a series about NASCAR’s connection with a highly controversial political group, you are going to get some strong opinions. But like a commenter said earlier in the week, you guys knew exactly what you were doing publishing it.

I think this series was way more than click-bait. It was clearly well-researched and well-presented. The inclusion of both anecdotal evidence and statistics was very informative, if one could look past one’s political bias.