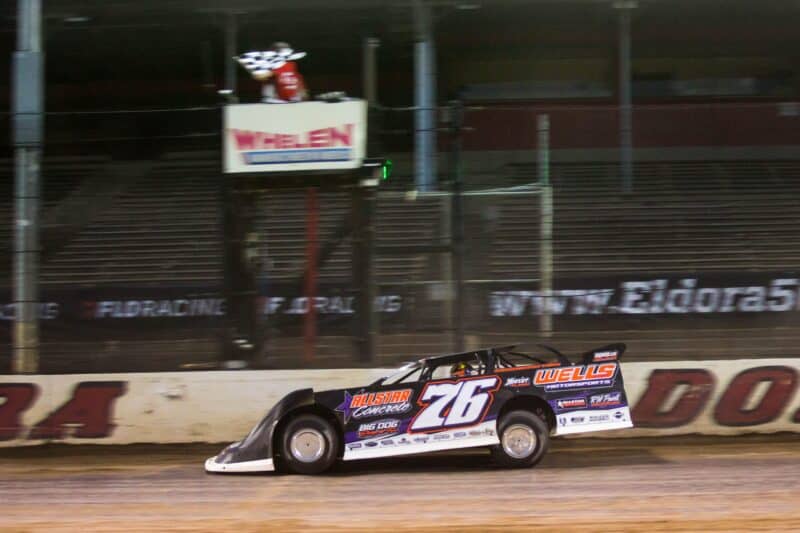 Christmas comes early for the “North Pole Nightmare” and a clash of the titans is brewing at Eldora Speedway.

Bill Balog’s red-hot return to Wisconsin continued Sunday night, with the longtime IRA sprint car veteran passing Rico Abreu shortly before midway and driving off with the 30-lap feature at Angell Park, the first 410 sprint car race at the long-time track in more than a year (Angell Park lost the entire 2020 race season due to strict local COVID restrictions).

Ian Madsen finished second for the third consecutive race on tour and made up a few points on series leader Tyler Courtney, who finished sixth.

Spotlight: 2021 Cole Millard Memorial
Where: Clay County Fair Speedway – Spencer, Iowa (streamed on Advantage Racing TV)
Why We Chose It: The only dirt race available for streaming in the U.S. on Monday.

Sioux City, Iowa’s Chris Abelson took a supremely racy track surface at the Clay County Fair on Monday night and wasted it, running away and hiding from the field to comfortably win the $1,000 IMCA modified feature of the Cole Millard Memorial. Though Abelson had some challenges with lapped traffic in the closing laps of the feature, he was never seriously threatened for the top spot. The field was seen racing two- and three-wide for much of the feature, an accomplishment for the track surface given that Monday was Clay County’s first race of 2021.

As for Abelson, who told the crowd in victory lane that he had gotten off to a late start to the 2021 season, momentum is proving a very real thing; his No. 1 car won the IMCA modified feature at the Buena Vista Raceway Wednesday night.

Spotlight: Bank Midwest IMCA Series
Where: Jackson Motorplex – Jackson, Minn. (streamed on Flo Racing)
Why We Chose It: With the Anthracite Assault at Big Diamond rained out, the only dirt race available for streaming in the U.S. on Tuesday.

With the IMCA Stock Cars taking a rare top billing in an IMCA program, Lakefield, Minn.’s Jeff Larson stuck to the low side of the racetrack even after Granada, Minn.’s Derek Green took the race lead on the high side on lap 11 of Tuesday’s 20-lap finale. That persistence paid off, with Larson taking the lead on a lap 14 restart and eventually using the low-side berm as a pick to keep Green at bay in scoring the win.

The feature race capped an extremely efficient mid-week program that contested five classes of cars in a tick over three hours. The Stock Car feature ended up being among the longest of the evening thanks to a red-flag incident on lap 18 that saw the No. 3 of Lakefield, Minn.’s Kevin Luebben in a collision that shredded his driver-side sheetmetal and started an engine fire that forced the driver to rush out of his car through the passenger-side window (he was unharmed).

Spotlight: 2021 Dream preliminaries
Where: Eldora Speedway – Rossburg, Ohio (streamed on Flo Racing)
Why We Chose It: With twin features paying $10,000-to-win, the highest paying races in the country Wednesday night. And Kyle Larson was on the entry list.

“Big Sexy” Brandon Overton and team grabbed a $10,000 victory in the first Dream preliminary race Wednesday night after persistent pressure on race leader Stormy Scott forced a mistake, with the race leader pounding the turn 1 wall with four laps to go and handing the lead to Overton, who easily handled the race’s final restart and scored his 12th late model victory of the 2021 season.

Big Sexy cashes in big for the first prelim feature of the 27th #DLMDream ? pic.twitter.com/qHFILYUjMw

Unlike a number of other contenders for this week’s Dream, Overton and his No. 76 team opted to skip racing the Historic 100 at West Virginia Motor Speedway this past weekend, instead focusing on preparation for tackling Eldora. That move paid off heading into Thursday night’s $127,000-to-win feature.

The second preliminary feature previewed a likely clash of the titans for Thursday’s Dream, with national super late model wins leader Jonathan Davenport scoring his third consecutive feature win in the second preliminary at Eldora (Davenport swept the Historic 100 at WVMS over the weekend). Perhaps the biggest story of the second prelim was Larson, who after throwing a strong slide-job on Mike Marlar to take third immediately prior to a lap 11 caution flag, saw Marlar shut the door on him on the ensuing restart, miring his powerful No. 6 in traffic towards the back of the top 10.

Balog. After making 38 ASCoC starts without a win, now the new series regular has scored two trophies in two days. Making hay on his home tracks, his No. 17 team is now riding a wave of momentum into the upcoming Ohio Speedweeks that will see the tour race eight times in nine days. Can’t put a price on that.

Algona, Iowa’s Colby Fett may have passed more cars than any dirt racer in America at this point in the week. Running at Clay County on Monday night and going from 25th to sixth in Monday’s IMCA SportMod feature, Fett made the tow to Jackson on Tuesday night and went from seventh to first to win the SportMod feature at that track.

Davenport and Overton. Both drivers took different approaches to Dream weekend as discussed above. Both drivers sit 1-2 in super late model wins across the country in 2021. And both took the prelims at Eldora. They’re the best for a reason.

The best interview of the midweek thus far went to Kyle Bronson, who finished in the top five of the first prelim at Eldora Wednesday. When asked if it changed anything having his car owner present at the track, Bronson responded “I’m just a broke guy from the trailer park, I can’t afford to lose my job.”

Waterloo, Wis.’s Kyle Stark had a rough night on the Badger Midget tour at Angell Park on Sunday, spinning in turn 3 during his heat race and surging backwards with traffic before flipping on its own in the corner. The damage was obviously worse than the crew thought, as Starke had to scratch from the B-main on the pace laps.

Steven Roberts put the “hard” in hard luck at Eldora Wednesday night. Two laps short of his heat race finish, Roberts hit the turn 3 wall and was forced to the first B-main. In that B-main, Roberts was collected in the four-car wreck that resulted when Kyle Strickler went spinning in turn 3. One lap after that, Roberts brought out another yellow when he hit the turn 2 wall.

Flo Racing’s crew reported that Kyle Strickler and his new affiliation with Scott Bloomquist’s race team had been preparing solely for Dream weekend after Strickler lost his ride and dropped off the World of Outlaws Late Model tour, but it didn’t show Wednesday night. After a strong qualifying effort that saw Strickler set to start on pole for his heat race, the No. 8 team was late to staging and forced to start at the rear of their heat race. Being mired in traffic forced the team into the first B-main, where Strickler spun in turn 3 early and triggered a nasty four-car crash. It seems years ago when Strickler won multiple races at Speedweeks in Florida.

For as stacked a super late model field as is at Eldora, most competitors are likely breathing a sigh of relief after seeing Josh Rice’s No. 11 car all but explode in the closing laps of his heat race Wednesday. Running second and keeping pace with race leader Larson, Rice had a catastrophic engine failure on the backstretch that sent smoke billowing across the entire Eldora campus.

Is this an action film or an @eldoraspeedway late model race? ?#DLMNightmare

The resulting fire was so smoky that the caution period had to be extended multiple laps after Rice parked his car in the infield to allow visibility to return to the racing surface.

Scott started the first Dream preliminary feature from the pole at Eldora Wednesday night and led the opening 21 laps before jumping the cushion and slamming the turn 1 wall while leading with four laps to go. Scott showed tremendous speed in a new Longhorn chassis that had not even been tested before taking the track at Eldora on Wednesday and may yet prove a factor later in the week.

Watching a small field of only seven sport compacts race at Jackson on Tuesday night reminded me of an issue I’ve seen far too many times at too many dirt tracks across the country… running a heat race where the entire field of cars is on-track completely ruins the feature. The beauty of climbing to an A-main is seeing the car count on track keep rising to an eventual climax. If it was up to me, if the field is too small to run two heat races, I’d take hot lap times to set the field, add a heat race worth of laps to the feature and go straight to the A-main.

It took until the final victory lane interview of the evening at Eldora before it got mentioned, but Davenport picked up on the fact that for all the hype surrounding Eldora’s re-opened grandstands, there were a TON of empty seats all around the track for Wednesday night’s prelims.

That will do it for us on night #1 of the 27th Dream here at @EldoraSpeedway – we’re right back in action tomorrow night for the $127,000-to-win Dirt Late Model Dream finale! ?

Full disclosure, I’ve never watched the Dream as a full event, so for all I know this is normal for the prelim night. It is a weekday after all, and for many that have to work if there’s a choice between a late night watching prelims and a late night tomorrow watching a crown jewel feature, the feature will win. But I’d also question if having four nights of “Dream” racing has, as I postulated a while back, got some fans being a bit pickier about attendance.

Leave it to the midweek’s smallest cars to give me my biggest headache. Watching Sunday’s Badger Midget feature at Angell Park, a lap 17 incident saw race leader Mike Stroik turned exiting turn 2 by second-place Andy Baugh. The contact was blatant, there was nothing ambiguous about it. But to see Stroik sent to the back for being spun, yet Baugh being penalized only a handful of positions and able to restart the feature in the top five despite causing the caution and taking out the race leader makes absolutely no sense to me. I will never argue that rulebook penalties for on-track conduct under green are appropriate… drivers should be left to police that themselves. But if penalties are the way a series is going to go, penalizing the victim 15 positions on track and the instigator only three is a ridiculous standard to set.

Where it Rated (on a scale of one to six beer cans with one a stinker and a six-pack an instant classic): We’ll give the mid-week four and a half ice-cold Milwaukee’s Best. The racing programs have been mostly efficient, which is great for those of us viewers that have to go to work the next morning, and we got a field of more than 70 super late models at Eldora.

Up Next: It’s Dream weekend at Eldora. Flo Racing has it all streaming. Our readers looking for sprint car and modified coverage can take the weekend off… we’re on a late model high this weekend.