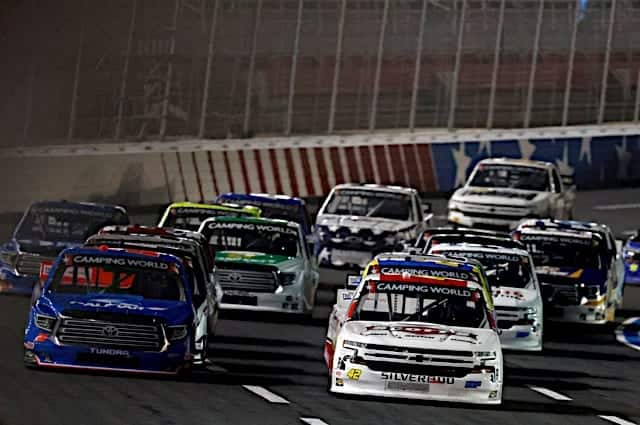 This Saturday (June 12), the Camping World Truck Series kicks off a doubleheader with the Xfinity Series ahead of the newly-relocated NASCAR Cup Series All-Star Race on Sunday evening.

For the first time since 1998, the Truck Series will visit the 1.5-mile Texas Motor Speedway oval just once after a 2021 schedule realignment that saw the addition of two dirt tracks and a few new road courses.

Coming into this weekend, only five races remain to set the playoff field for this season, and while winners John Hunter Nemechek, Ben Rhodes, Sheldon Creed and Todd Gilliland are locked in, there are still six spots open for drivers to point their way in. Despite being winless so far in the season, Austin Hill finds himself in a pretty comfortable position with a 126-point cushion over 12th-place Johnny Sauter.

While Cup drivers Ross Chastain and Chase Elliott will be in the field this weekend, it’s a prime opportunity for series regulars to shine and some of them could really use the win.

Currently 11th in the standings and a healthy 43 points behind rookie Carson Hocevar,  Sauter has had a less-than-stellar season with just two top fives and four top 10s in 10 races. His 16.9 average finish isn’t going to be enough to point his way into the playoffs.

The good news for the veteran, though, is that Texas has been a solid track for him in recent years. From 2016-2019, Sauter finished in the top 10 in six of eight races, including three trips to victory lane. By comparison, he posted finishes of fourth and ninth at Atlanta Motor Speedway and Kansas Speedway, both mile-and-a-halves, respectively. All told, Sauter has five wins at Texas and an average finish of 8.2 in 25 races. He’s definitely one to watch this weekend in the summer heat and could play spoiler as a driver outside the top 10 in the standings winning his way in.

Largely overshadowed last season in his first year with GMS Racing, Ankrum has had another forgettable season thus far with just two top fives (third at Richmond Raceway and Circuit of the Americas). In fact, he currently sits 60 points below the playoff cut line, and while that deficit isn’t insurmountable, it’s not an easy climb either. Marred by three DNFs for crashes and an average finish of 19.2, this weekend could be where Ankrum is able to turn around his season.

After all, Texas has been kind to him. It’s the home of his first career top five (third, 2019), and he has finishes of sixth (twice) and third to go along with a 16th-place run last fall. The key for Ankrum, though, is that he’ll need to have a setup on the truck that’s solid from the drop of the green flag. All too often, the No. 26 team shows late-race speed but has to use the time to dig from deep in the field rather than near the top 10. Ankrum starts 11th and will have decent track position. What he does with it could turn out to be the make or break moment of his season.

Back behind the wheel of the No. 98 Toyota this weekend, Enfinger, who’s never won at Texas, would love nothing more than to win. After all, he was forced into a part-time schedule sharing the truck with Christian Eckes due to sponsorship issues.

Aside from an engine failure last fall, Enfinger has never finished outside the top 12 and has four top fives and six top 10s in eight starts at Texas. While his average finish sits at 9.3, take out the engine failure and that jumps to sixth. And given that his focus is on winning races over scoring points for the championship battle, Enfinger will likely take a more aggressive approach if he has the opportunity.

The thing about Enfinger is that he’s in a unique situation where he’s likely to “make” the playoffs on points, despite missing the Daytona International Speedway road course. The problem is that technically, he didn’t attempt to start every race this season, making him ineligible for the playoffs.

I’ve said it before and I’ll say it again: NASCAR set a dangerous precedent in 2019 when Sauter was penalized and suspended for a race while still maintaining his playoff eligibility. Logic says rewarding a suspended driver with a chance at winning the championship sets the example that a driver who wasn’t able to put together a ride in time, but had every intention of racing that weekend, should get the same privilege.

Of course, that remains to be seen, as does whether Enfinger will win or point his way in.

While he’ll be at a bit of a disadvantage this weekend with no prior Truck Series starts at Texas,  Hocevar has shown improvement over the last few races. A fifth-place run in the season opener at Daytona is easily explainable based on superspeedway uncertainly, but it’s a little harder to dismiss the rookie’s three straight top 10s in the last three races.

In fact, he put on quite the show at Charlotte Motor Speedway two weeks ago, leading five laps and trying to chase down Nemechek on a late-race restart. The runner-up finish left Hocevar lamenting what might have been if he’d been able to make the pass for the lead when the field restarted with 10 laps remaining, and it’s easily lit a fire under him that’s got him ready to find victory lane.