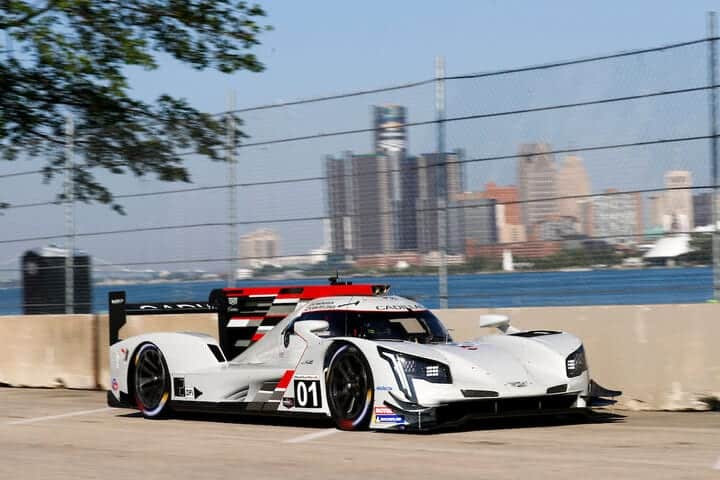 Cadillac flexed their muscles early in the IMSA WeatherTech SportsCar Championship’s visit to the Motor City as the General Motors brand topped the time sheets in both Friday practice sessions for the Chevrolet Sports Car Classic.

Tristan Vautier set the fastest lap in the opening session in the Mustang Sampling/JDC-Miller Motorsports Cadillac DPi as the Frenchman went around the 2.35-mile circuit at 103.691 mph.

Second fastest was Ricky Taylor in the No. 10 Wayne Taylor Racing Acura ARX-05 just .096 seconds off of Vautier’s time while third place was Kevin Magnussen in the No. 01 Chip Ganassi Racing Cadillac.

In the afternoon practice session, Cadillac swept the top three positions with Magnussen on top with a lap of at 105.660 mph. Pipo Derani was second for Whelen Engineering and Loic Duval was fastest in the Mustang Sampling/JDC-Miller Motorsports DPi.

In GTLM, the Corvette Racing C8.R machines were 1-2 in class for both sessions, primarily because they’re the only cars entered in the GTLM category this weekend. Nick Tandy set the fastest lap for the No. 4 Corvette at 95.078 mph while co-driver Tommy Milner was fastest in the second session at 95.995 mph.

GTD had one major issue for a competitor as Paul Miller Racing had a pipe failure that caused the engine in their No. 1 Lamborghini Huracan GT3 to run a bit hot. The team changed the engine after the first practice session out of caution and missed the afternoon practice session.

The team did have some help as Turner Motorsport loaned the team an engine hoist to help get the V10 out.

On top of the time sheet in GTD was Mario Farnbacher in Compass Racing’s newly-purchased No. 76 Acura NSX GT3 with a fastest lap at 93.036 mph. Compass Racing debuted their Acura last month at Mid-Ohio Sports Car Course after racing a McLaren 720s GT3 in the sprint races in 2019 and 2020.

Richard Heistand was second fastest in the morning session for the CarBahn with Peregrine Racing Audi R8 LMS GT3 entry, just a third of a second slower with Jack Hawksworth third in the No. 14 Vasser-Sullivan Racing Lexus RC F GT3.

In the afternoon practice session, Hawksworth was fastest with a quickest lap at 93.486 mph. Heistand was second and Farnbacher was third.