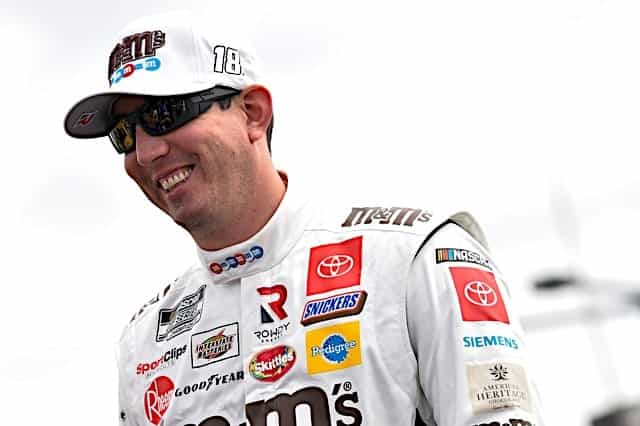 While the NASCAR Cup Series races for $1 million, the Xfinity Series competes for wins and points at Texas Motor Speedway on Saturday, June 12 at 4 p.m. ET. Which Xfinity drivers should you place in your daily fantasy NASCAR DraftKings lineups? Read on!

We’re trying something a little different this week, since the All-Star Race has about half the field of a regular Cup event. The Xfinity Series is set to run the first of two Texas events scheduled this season, much later than most of the previous spring races. Last year’s race was pushed to July as most of the 2020 schedule was rearranged due to the COVID-19 pandemic. But before that, it was run at the end of March or beginning of April. The track is likely to be warmer this time around than in those events, which could force crew chiefs to make early adjustments to the cars.

One more thing to note is that this race is 33 laps shorter than each previous race, and the final stage is 87 laps; in last year’s spring event, the final stage was a little over 100 laps, with three cautions breaking up the green flag runs. That means there’s less time for a driver to come through the field and earn a good finish.

Six races were won from the pole, with the last one coming in 2018. But the winner hasn’t started further back than 12th since 2008, where Kyle Busch won after qualifying 31st. If you want the winner in your lineup, you’ll likely want someone starting in the top 10.

Also be mindful that those who lead the most laps may not win the race, as that occurred in both Texas events last season.

DraftKings tends to give the Cup drivers competing in well-funded Xfinity cars a super expensive salary, and this week is no different. Busch is $3,000 more than the next driver, Noah Gragson (who is starting near the back). Even though Busch is this pricey, it’s hard not to want to choose the Joe Gibbs Racing driver.

He has nine victories at Texas in NXS and would’ve won the first race there last season had he not been disqualified. It was only his second did-not-finish in 22 races. He did win the spring 2019 event after leading 33 laps. Additionally, Busch led 150 out of 200 laps en route to the 2016 victory.

He sits at 98 NXS wins and would love nothing more than to make it 99 this weekend. Hopefully he’ll charge to the front right away and lead several circuits to help pay off his high DraftKings salary.

Burton’s win last fall was quite unique, as he passed Gragson in the final turn of the last lap to take the checkered flag. He led 24 laps in that race and 17 in the first Texas event of 2020 before ending in fourth. Additionally, he ended seventh in the fall 2019 race.

So far this season, the No. 20 JGR pilot has nine top 10s, including third at Daytona International Speedway, Atlanta Motor Speedway and Charlotte Motor Speedway. Burton also gained 13 positions at Las Vegas Motor Speedway to end in ninth. He was on a nine-race streak of 29 or more fantasy points on DraftKings before wrecking his car at Mid-Ohio Sports Car Course last weekend. Although he’s still searching for his first win of 2021, Burton should still score well on DraftKings if he earns a top 10.

Texas isn’t really Cassill’s strong suit, it seems, as his highest Xfinity finish was 18th in 2010. He also was 19th in 2014. However, he has earned a few top 20 finishes so far this season, with his highest finish of 12th coming at the Daytona road course and Darlington Raceway. He also was 19th at Homestead-Miami Speedway, 14th at Atlanta (after starting 20th) and 13th at Charlotte (up 15 positions).

These results helped him score well on DraftKings, scoring 45 fantasy points at CMS. Also, those three tracks are all 1.5 miles, indicating that his strength is on this type of course. If he does well once again at Texas, Cassill should pay off his DraftKings salary.

Clements is like the little engine that could this year, earning five top 10 finishes so far. That includes a 10th at Charlotte and a sixth place at Darlington; his DraftKings total in the latter event was 44 points. His higher finishes helped his starting position to be higher, so he doesn’t have higher fantasy scores. Still, he’s shown he can contend for top 15s and 10s.

Clements has also done fairly well in some events at Texas, ending 11th last year. He also was 16th and 14th in each race in 2018. Though he doesn’t usually lead laps, he should score well on DraftKings if he earns another top-10 finish. Clements will roll off 20th Saturday.

Currey has been alright so far this season, considering he drives for a backmarker. He moved up 22 positions at Phoenix Raceway to end in seventh, his lone top 10 of the year. Also, at Darlington Raceway he gained 14 spots to end 25th. He’s starting 39th and has the potential to earn a lot of position differential points on DraftKings.

His Texas starts are what caught my eye, though. Each time he’s been to this 1.5-mile track, he’s improved. Last season, Currey ended 19th and 12th in each race, 22 and 12 positions higher than where he began, respectively. An 18.8 average finish is not bad for an underfunded car, and I have no doubt he’ll be able to get at least another top 25.

When you have a top heavy roster such as this one, you might have to dig down this far to fit the drivers you want. I mean, you could do worse than Weatherman, who’s starting 29th. He hasn’t exactly been the flashiest guy in the series, but he did gain six positions at Martinsville Speedway to finish 25th. He also ended 22nd at Dover International Speedway, 10 spots further from where he started.

Weatherman had a strong run last fall at Texas with a 19th-place result, gaining 17 positions on the track. That’s pretty good for the underfunded Mike Harmon Racing team. His other results here weren’t as high, but since he’s starting 29th, he’ll have the opportunity to move up a few spots. That’s really all you need for this salary.