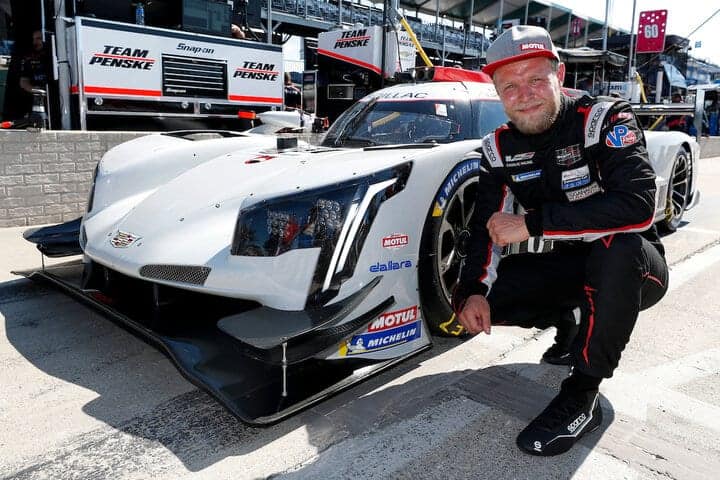 Chip Ganassi Racing’s Kevin Magnussen won the pole Friday (June 11) for the Chevrolet Sports Car Classic at Belle Isle Park with a lap at 105.709 mph.  This backs up Magnussen’s quick time from the second practice session.

The Cadillacs dominated the session.  Action Express Racing’s Pipo Derani was up front early on, then JDC-Miller MotorSports’ Tristan Vautier went to the top of the chart.  Mazda Motorsports’ Harry Tincknell was able to put himself up there, but Magnussen snatched it away just in the nick of time.

The session was ultimately cut short to 12 of the scheduled 15 minutes after Vautier clipped the grass between turns 3 and 4.  This pitched his Cadillac DPi-V.R. into a spin once Vautier hit the brakes and put him hard into the tires.  Vautier tried to drive away, but the car ground to a halt on Strand Drive just past the exit of turn 6.

Magnussen’s lap was two-hundredths of a second faster than Tincknell.  Vautier would be starting third on Saturday, but bringing out the red flag has consequences in IMSA.  Not only is Vautier’s Cadillac damaged from the crash, but he also lost his best two laps in the session and his points.

As a result of Vautier’s penalty, Derani will now start third.  Wayne Taylor Racing’s Ricky Taylor will start fourth in his Acura, followed by Vautier.

In GT Daytona, the bumpy track surface did catch a couple of drivers out.  During the starting grid portion of the session, Alegra Motorsports’ Michael de Quesada got loose and actually hit the wall during the session.  Later on, Vasser Sullivan’s Aaron Telitz caught the wall exiting turn 2 in his Lexus.  While de Quesada was able to continue without issue, Telitz’s car suffered a broken right rear suspension, ending the session for the No. 14 Lexus early.

CarBahn Motorsports with Peregrine Racing’s Richard Heistand put himself on top early in the session.  No one else was able to touch that.  At the end of the session, Heistand improved to a lap at 93.451 mph to win the class pole for the race.  It is the first GT Daytona pole for CarBahn Motorsports with Peregrine Racing in only their second start.

Heistand’s lap was nine-hundredths of a second faster than Vasser Sullivan’s Frankie Montecalvo.  The Heart of Racing’s Roman DeAngelis will start third, then Turner Motorsport’s Robby Foley and Telitz despite his damage.

There are only two GT Le Mans entries at Detroit this weekend.  Corvette Racing’s Nick Tandy will start from the pole with a lap at 96.926 mph.  The lap was three-tenths of a second faster than Jordan Taylor.

In the points portion of the session, The Heart of Racing’s Ross Gunn was quickest early on before SunEnergy1 Racing’s Mikael Grenier went to the top of the chart in his Mercedes.  The two traded the top spot until Townsend Bell, pressed into service after regular driver Zach Veach tested positive for COVID-19, usurped both of them and took the top spot.

Ultimately, Compass Racing’s Mario Farnbacher set the best lap of the session at 94.135 mph to claim the maximum 35 points.  His lap was one-eighth of a second faster than Gunn.  Bell was third, then Jeff Westphal and Katherine Legge.  The damage that Telitz suffered in the first part of qualifying meant that Jack Hawksworth was unable to take part.  As a result, Telitz and Hawksworth were unable to earn points towards the WeatherTech Sprint Cup in the session.

The Chevrolet Sports Car Classic is scheduled to start at 5:10 p.m. Saturday afternoon.  The race will air live on NBCSN starting at 5 p.m.