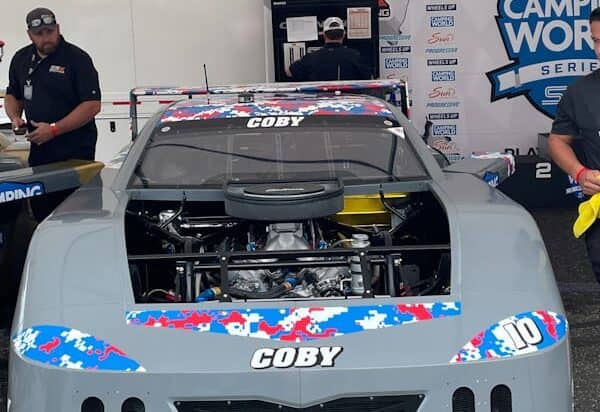 In a field filled with this year’s Indianapolis 500 winner, a NASCAR Hall of Famer, a Daytona 500 winner and other racing luminaries, it was the local driver Doug Coby who shined in the first-ever Camping World SRX Series race. Coby won the second heat race, thereby starting first. He then led the most laps in the feature en route to the victory Saturday night (June 12) at Stafford Motor Speedway.

Coby is a six-time NASCAR Whelen Modified Tour champion. He competed in this event as the track legend, and he surely proved his experience at the short track.

Coby’s victory was especially popular with fans as they chanted his last name during his interview.

“I can’t believe I fell on my butt after winning,” Coby told CBS after climbing victoriously out of his car. “What a special night for short track racing in America. This is a special night for Stafford Motor Speedway and everybody who is a short track racer around the country, dirt or asphalt. To have this amazing crowd at Stafford, I really want to thank Ray Evernham and everyone at SRX, Camping World … this means a lot for short track racing. The only thing I screwed up tonight was my exit. I’d do it all over again if that’s what it takes to win this race, so thank you fans!”

Doug Coby gave up a part of his chance at a championship to race tonight at @StaffordSpeedwy and Coby turned that into a memory of a lifetime. pic.twitter.com/HrQW70BafQ

Greg Biffle finished second while using one of the backup cars after he crashed out of the second heat.

Biffle led all the laps to win the first heat, making history as both the first driver to lead a lap and take the checkered flag in series history.

The first checkered flag of the @SRXracing season belongs to Greg Biffle!! ? pic.twitter.com/uNnO1L732g

In the first of this six-race inaugural season, Coby showcased his prowess at the track in Stafford Springs, CT.

In addition to winning six NASCAR championships and 30 wins on the Tour, Coby isn't even a full-time race car driver by trade.

He's a Connecticut real estate agent during the week and a weekend warrior.

Saturday night wasn’t without incident, however, as the racing ramped up as the night wore on.

In the second heat, Willy T. Ribbs spun, and Helio Castroneves made contact with Biffle.

Four laps into the feature, Waltrip again spun. He and Bill Elliott were the two drivers who were unable to finish the 100 lap feature.

Castroneves also made contact with Marco Andretti. Castroneves blamed the incident on no spotters in this series.

When the checkered flag flew though, it belonged to Coby.

The next SRX race is at Knoxville Raceway next Saturday (June 19) beginning at 8 p.m. ET with TV coverage provided by CBS. Brian Brown will seek to make it back-to-back wins for the local track drivers.

I turned it off

Were you looking for a driver’s mom to bang?

Helio blames the spotter? He just ran into everything. A spotter can’t help you if you run into the rear end of people, TWICE.

There were no spotters

I dozed off. So even though biffle had problems he was given back up car as almost won. I guess I just don’t understand all the rules.

Last edited 11 months ago by TiminPayson
0
-6

I guess racial slurs were not enough for you. So now you have stooped so low as to slander a driver’s mother?

They have some kinks to work out, CBS needs to up their game and quit missing passes through the field. There were several instances where they pointed out a battle for position, then got distracted by another “story” and a lap later I saw the previous positiin had changed hands. Would like to have seen those passes.

Overall, it was short track racing. Only Biffle and Coby were really “on it” all night. Biffle was taken out by an incident not if his making. I’m actually good with the backup car rule, but I think they should take the tires off of the expired car (if they are in safe, usable condition) and only replace any damaged tire with scuffs.

There were some surprises. Marco had a few shining spots where he made some moves and appeared competitive. Helio seemed the most in need of a spotter. I thought Kanaan would be more competitive. Tracy was trying to be the Newman of SRX. I liked Mikey’s comment about everything hurting, but he didn’t realize any of that until after he was passed for the lead. lol

It was unrefined and there is room for improvement in a few areas, but for a first effort I though it went pretty well. I was hoping for some post race questions to Ray and Tony about their thoughts of it before the telecast ended. Oh well.

A Different Steve
Reply to  Jeremy

I pretty much was thinking all of this. Tires on the backup car should not be slicks unless the rest of the field is also on slicks. Biffle definitely had the advantage at the start of the feature, so I hope they adjust that.

I was also frustrated at the camera work and “stories” placed at the wrong time. Not sure what the networks fascination is with in car and bumper cameras. We miss so much racing that it really drivers me crazy at this point. And poorly placed stories were frustrating as well.

I’m not sure what everyone expects from the driver lineup. All the stars of other series aren’t going to be racing in this series since most of them are in the middle of their own series seasons. Since FOX is now completed with their part of the Cup season, you have to wonder if Gordon will participate. That would be a pretty big boost for the series.

I thought Danica did a good job and added some interesting stories. Brad Daugherty needs to tone down the hype. He overdid it.

It certainly wasn’t perfect but I think it was a success for the first time out. I’m confident Ray and Tony will make some adjustments for the better on some of the things that didn’t quite work.

I’m glad I didn’t watch. I hope this trash-sport dies a quick death.

Where to start? The race and broadcast was a total mess. Never thought I’d say a half mile track was too long for this type of racing.

Bestwick and Patrick were awful in the booth together. Danica can’t form a coherent sentence, but keeps on talking. It’s like they were broadcasting the race from a remote location and were unable to call the race in real time.

A little action on restarts, but that’s about it. Glad Coby won.

The drone and visor cam footage made me dizzy. CBS forgot how to cover a race. All glitz and glamour, no substance.

Grandstands were full. I must have missed any air time the fans received?

The race was an embarrassment for the drivers, CBS, and SRX.

Seems like the Stewart Racing Xperiment didn’t go over very well. It may have been over hyped. Imagine that, Bubba. It might be better next time.

It wasn’t great but it was the first race and I sure they (SRX and CBS) will assess the performance and make some changes. The graphics showing the running order was so tiny I could barely read it. As for the actual race, it could have been better, but it wasn’t horrible. I think it will be interesting watching the SRX this summer, even if the races aren’t perfect to start with.

Agree with the person who said Danica did not do a good job in the booth. I’ve always liked Alan as an announcer, but Danica missed almost every talking point set up he gave her. I think they should put Kenny Schrader in the booth with Alan if they don’t have him in the race.

And the camera coverage needs work too, especially of the on track action/race footage. I don’t get much out of the drone cam either. At least the visor cam gives somewhat of a drivers view shot, imperfect as it was.

Like any first time event, I’m sure there will be discovery of what worked and what didn’t, and adjustments will be made. Unlike others here, I hope it improves, succeeds, and becomes another series providing good, entertaining, profitable (especially for the small town tracks) addition to our autosports selection.

The best thing that came out of that event was I didn’t have to listen to Mikey during the Truck race. Was Helio and Mikey having a contest to see which one could tear up their car the worse?

Didn’t see it but it doesn’t sound like I missed much. I still will check one out if I don’t have anything better to do but I had my doubts before the negative reviews in these comments.

If anyone has ever listened to Danica talk during interviews or whatever, she has never seemed to be very bright. She’s still looking for someone to marry her. Ricky turned her down, then Rogers. Dang, I missed the broadcast too.

will princess sparkle pony always be in the booth I realized how much I missed Alan bestwick and that crew of old reporters.

I don’t know if she’s expected to be in the booth every week or not. I was amazed she spent, what, 3 years in Cup and had never heard of “Awesome Bill from Dawsonville”?!

But it’s not surprising. We watched a documentary on her, I thought maybe we just didn’t see her true character on racing TV. Nope. She pretty much thought she was just the driver and all she had to do was show up and drive. Didn’t seem like she was too interested in hanging out and bonding with her team. Which in hind sight explains a lot about her Cup career, looking back. The best drivers make an effort to connect with their teams – not diatance themselves from them.

I still miss the Monday show Bestwick did with (usually Ken Schrader and Kenny Wallace), I think it was “Inside NASCAR Winston Cup” or something like that. Alan, Kenny, and Kenny was a fun mix. Basically Alan was the ringleader trying to keep the other two from completely going off the rails! lol

It only took me a few laps to realize that it wasnt something I was interested in.