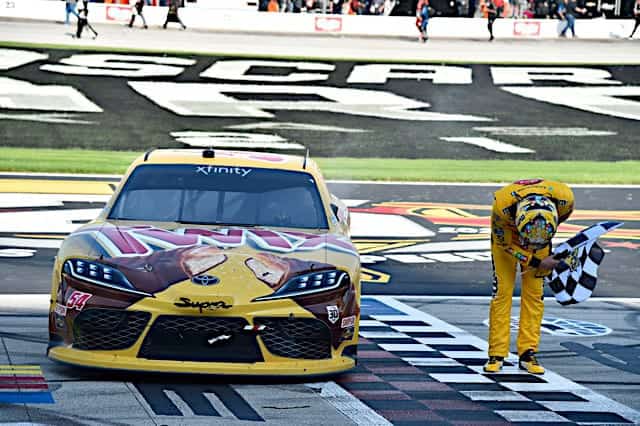 The top full-time drivers in the NASCAR Xfinity Series threw their shares of haymakers at the No. 54 of Kyle Busch during Saturday’s Alsco Uniforms 250 at Texas Motor Speedway.

It wasn’t enough to keep Busch out of victory lane, however, as he came out on the winning end of a back and forth duel with Justin Allgaier during the final stage. Busch, who conceded the lead to Allgaier on restarts with 52 and 41 laps to go, got the lead when it mattered most, making the pass with 29 circuits to go and stay there the rest of the way.

Busch had to make two final stands in the final laps to sew up the win. After a caution came out with less than 10 laps to go on a spin by Myatt Snider, Busch built a strong gap as the race resumed, using the inside line to his advantage. That went for naught as Harrison Burton took a hard hit to the outside wall after washing up high off the PJ1 traction compound. It was the same song but a different verse in overtime with Busch getting a lead on the restart and pulling away, bettering Allgaier to claim his 10th Xfinity win at Texas and 99th overall in the series.

“All in all, such a good car,” Busch told NASCAR on Fox following his win. ” I was just able to think through a few things there on a couple of restarts that may or may not work, but there at the end, they did.”

Allgaier finished second, followed by Austin Cindric, Daniel Hemric and Brandon Jones to round out the top five. Behind them were AJ Allmendinger, Noah Gragson, Brett Moffitt, Justin Haley and Michael Annett. Cindric was strong early, winning the first stage with Busch taking the second one.

“We were already on the verge of being really tight, it just got worse at the end,” Allgaier told Performance Racing Network following the race. “It was nice to go out there and have a really solid day. We had a good day and made Kyle beat us. He’s a really good driver and he just beat us today.”

The race had eight on-track cautions. Other than Snider’s and Harrison Burton’s late spins, the only caution involving drivers toward the front of field came on lap 60 when contact from behind by Josh Berry sent Jeb Burton into a spin. Berry would continue and finished 19th with Burton ending up 32nd.

Here's what happened at Texas between Jeb Burton and Josh Berry: https://t.co/mY1JwiLzRV pic.twitter.com/03RKMuXNW9

The two shared words after the race, as well…

Jeb Burton had a chat with Josh Berry with Berry still in the car. pic.twitter.com/rqCuy9GC5z

“We had a decent car. We were going to be top ten, top six and we got taken out,” Burton said. ” Very frustrated, our guys work way too hard to be run over like that. I said my peace and it is what it is.”

The race’s other multi-car incident came during a frenzied start to the third stage. While Busch, Allgaier, and Cindric were going three wide for the lead, Gray Gaulding, Tanner Berryhill and Matt Mills got together as part of a three-car melee.

The NASCAR Xfinity Series returns next Saturday for the Tennessee Lottery 250 at Nashville Superspeedway. Green flag is scheduled for 3:30 p.m. on NBCSN.

The reason not to watch another Baby Busch Benefit.

Maybe he quits at 100. I remember feeling the same way about Mark Martin. Wondering why he kept running against those young uns.

Busch is 36. Mark was still running bush races at 52/53. It might just be me, but I don’t see any exceptional racers in Xfinity today. I see a couple good racers who will race in cup for years, but no stand outs.

I did not see the race (had something better to do) but had the TV on during the pre-race show. The were interviewing KB and he stated with no hesitation the when he hits 100 Xfin wins he is retiring from Xfin racing. The only caveat is if Joe Gibbs asked him to run an Xfin race or two as a favor to help out the overall program. I hope that’s true.

I thought it was great that Kyle Busch gave Austin Cindric credit for the great push he gave Kyle on the last restart, calling him a pseudo-teammate. The conversation between broadcaster Logano and driver Busch was also classic with Joey assuring Kyle that he had put his “hater hat” away in his new role.

Seeing this race and this year’s Cup races, I wonder if FOX is getting some kind of kickback from HMS/JRM for repping their drivers. All we hear is Larson in Cup broadcasts and all we hear is Gragson in NXS broadcasts. Larson may be hard to ignore lately, but Gragson was hardly worth the TV time he got Saturday, never contending for the win and finishing 7th.

Maybe it was because he started 30th under NASCAR’s make it – take it rule and passed more people than probably anyone else?

I am still trying to understand why there was a caution with just over 30 laps let in the race. The only thing I saw was the rear of Brandon Jones car slip on him a little bit, but he never spun, didn’t hit anything, and gathered it up kept on running.

You shouldn’t be surprised that NA$CAR would throw a caution flag when a car gets sideways when a certain driver needed one, especially since they came up with the brilliant idea of double-file restarts. It would be a surprise if they didn’t. And if the driver doesn’t get the start he needs there’s always time to throw another one.