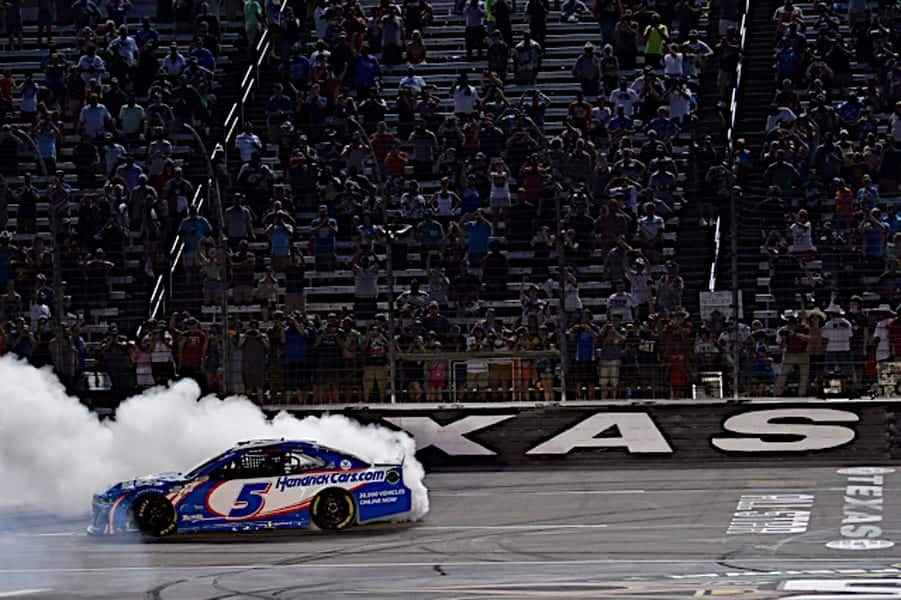 Kyle Larson continued his reign over the NASCAR Cup Series on Sunday (June 13) night, by winning claiming the 2021 All-Star Race and claiming two of the six segments at Texas Motor Speedway amid another night of Hendrick Motorsports domination.

Larson led 17 laps overall through three inversions and battles throughout the pack, winning his third straight race (albeit this one non-points-paying) with several teammates in tow.

Texas’ first time hosting the event came two years after Larson’s triumph in the 2019 edition of the race at Charlotte Motor Speedway. Sammy Hagar cranked out a lively rendition of “I Can’t Drive 55” in the grandstands, belting the final notes literally as the cars were about to take the green flag.

? I CAN'T DRIVE 55 ? @sammyhagar gets us ready to roll for the NASCAR #AllStarRace at Texas Motor Speedway! pic.twitter.com/DaF4JUDkZy

Things shook up rather quickly, with the night’s first caution flying on lap one for a Christopher Bell near-spin, though the driver of the No. 20 saved it. Larson and Busch remained the top two, duking it out up front and swapping the lead back and forth.

Rate this save by Christopher Bell on a scale of 1-20: pic.twitter.com/n2M8q2QXi0

Larson eventually regained the lead and William Byron followed him into second, but couldn’t catch the No. 5 as the winner of the past two races — and past five stages — claimed the first segment.

A random draw, hosted at every break by FOX Sports’ Adam Alexander and the Dallas Cowboys cheerleaders, determined that the top 12 cars were inverted after the opening round.

Round 1 goes to @KyleLarsonRacin and 12 cars will be inverted!#AllStarRace | @TeamHendrick pic.twitter.com/skbTmg1ovZ

This cycled Ryan Blaney into the lead, and he answered by dominating and winning the second segment, making a spectacular save in the process.

Ryan Blaney makes a great save early and holds the lead to capture Round 2 of the #AllStarRace: pic.twitter.com/0qvnrBVr9v

With the entire field inverted this time around, All-Star Open transfers Aric Almirola (won the third segment of the Open) and Matt DiBenedetto (won the fan vote) led the way under the green flag. Almirola faded as DiBenedetto took advantage, but a battle for the lead between the No. 21 and Michael McDowell allowed Alex Bowman to take charge, scoot by the both of them and win the third segment. Almirola rebounded to finish third.

Another throw down to Alexander in the infield and another number reveal revealed that the top nine cars were inverted after the third segment, giving Byron the lead. The No. 24 took full advantage, cruising to the segment victory.

The fifth segment was preceded by no gimmick, a straight-up sprint that kicked off a cycle of mandatory green-flag pit stops. Larson and Byron battled for the lead while both Kyle Busch and Austin Dillon were nicked with speeding penalties.

The first caution for an incident since early in the race flew in the fifth round, about midway through the 30-lap segment. Ross Chastain was tagged by Ryan Newman, sending the No. 42 sliding, but he recovered without hitting anything.

Brad Keselowski led the field back to green, but Hendrick Motorsports quickly overtook him. Chase Elliott and Byron battled, weaved, and traded the lead up front while the rest of the field could only watch; the Nos. 9 and 24, as well as stablemate Larson, rounded out the top three to sweep the segment’s podium for HMS.

"Anybody but a teammate? Sayonara. See ya, buddy." pic.twitter.com/3iicJlJhio

Hendrick occupied the top three spots for Round 6 as well, but Blaney presented the first real challenge to their dominance, diving to the inside as the Chevrolets shuffled but fell back.

Elliott was solidly out front of Larson and Keselowski when both closed in on him, and Keselowski grabbed the lead when the pair sailed high as Larson tried the outside line. The No. 5 cleared Elliott, though, and set his sights on Keselowski, who he also passed.

Larson held the lead as Keselowski closed back in on him, but the No. 2 wasn’t able to muster up a run and the No. 5 cruised to his second career All-Star victory. He had a more comfortable berth this time, though: in 2019, Larson raced his way in via the Open and then won the main event.

“Honestly, I can’t believe it,” he said in his post-race interview. “That second run there, we were really bad, and I was like ‘man, we’re in trouble,’ I went backwards that round. We [had] an uphill battle, and did not imagine seeing myself winning this race today.

“That last restart worked out exactly how I needed it to. I wanted Chase to not get a good run down the back, thankfully I think the [No.] 12 got to his inside and I just shoved him down the back. He probably thought I was gonna just follow him and I was like, ‘there’s gotta be enough grip above where we had been running for one corner,’ and it was a little slick up there, but I was able to get it and hold them off from there. Can’t believe it.”

It was the restart he needed. ?@KyleLarsonRacin explains how he was able to get to the front when it mattered most. #AllStarRace pic.twitter.com/pIYYgIX7qg

All told, Larson won two of the segments, and Hendrick as a team won five of the six. Blaney’s round 2 victory was the sole non-Chevrolet, non-Hendrick segment triumph.

Next weekend, the Cup Series heads to the Music City for a date at Nashville Superspeedway, which has never hosted a premier series event and hasn’t seen a NASCAR national series race since 2011. Coverage is set for Sunday, June 20 at 3:30 p.m. ET on NBCSN, the network’s first race of the year.