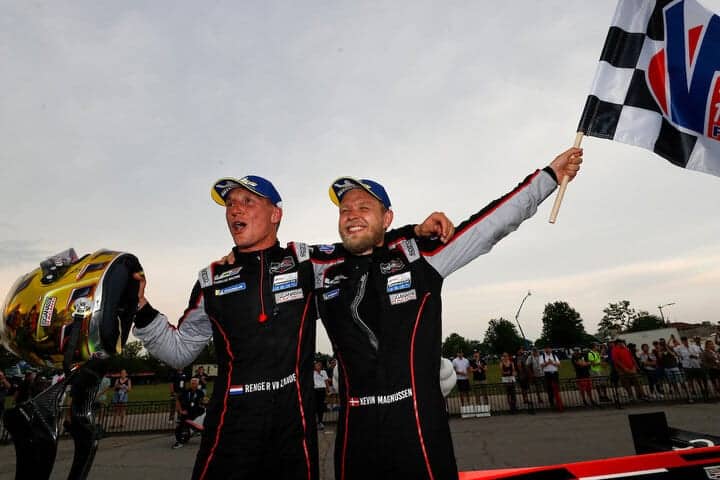 Chip Ganassi Racing’s Kevin Magnussen and Renger van der Zande dominated the Chevrolet Sports Car Classic Saturday (June 12) at Belle Isle Park.  The duo led for 63 of 65 laps, but held off a late charge from Action Express Racing’s Felipe Nasr to claim the overall victory.  It is their first Prototype victory since Joey Hand and Scott Pruett won at Circuit of the Americas in 2015.

“First for me.  I haven’t won a race since the end of 2013 so it’s the first time I’m spraying the champagne,” Magnussen said after the race.  “We’ve just been fast.  I’d say the whole season we’ve been fast but we haven’t been able to get to the end in the lead.  We’ve been leading a lot of laps this year so finally we lead the right lap.  I’m very pleased for that!  Obviously, CGR had a very impressive weekend this weekend.  So I’m happy to contribute to that success.”

“A Brazilian behind you is never easy.  But we controlled the race, I think,” van der Zande stated.  “[The team] told me to keep pushing on the last lap, and I thought there was another lap going.  Then on the last corner, they told me well actually it’s the checkered.  So it made life easier.  I think the restart was good for us.  The track got really slippery in those last two or three laps.  I had some big moments and I think [Nasr] also had some moments so I could pull a bit of a gap.”

Magnussen started from the pole Saturday and immediately stacked a small lead over Pipo Derani.  Tristan Vautier, who was forced to start at the back of the class after his crash in qualifying, quickly moved up to third on the first lap.  It did not take long for Magnussen and Derani to drive away from the rest of the field and attempt to settle things among themselves.  Within 30 minutes, they had an eight-second lead over Vautier.

Magnussen and Derani pitted on lap 34 for their one and only stop of the race, knowing that fuel conservation was necessary to make it to the finish.  That said, the rest of the class was in the same boat.

Van der Zande and Nasr proceeded to continue to drive away from the field.  With 30 minutes remaining, they were nearly a half-minute ahead of third-place, but running nose-to-tail.  Nasr hounded van der Zande as they fought their way through lapped traffic, but could never get fully alongside the Ganassi Cadillac.

The full course caution came out again with 10 minutes to go when Turner Motorsport’s Bill Auberlen suffered a complete loss of power and stalled on Strand Drive.  If anyone needed to conserve more fuel, then this put them over the hump to make it to the finish.

From here, the race came down to a Green-White-Checker restart.  Van der Zande was able to hold off Nasr over the final two laps to win.  The margin of victory was a little more than a half-second over Derani and Nasr.  Wayne Taylor Racing’s Filipe Albuquerque and Ricky Taylor were third, followed by Mazda Motorsports’ Oliver Jarvis and Harry Tincknell.  Vautier and Loic Duval were fifth.

GT Le Mans saw only the two Corvettes racing against each other.  That said, they did put on a race.  On the start, Jordan Taylor was able to get past Nick Tandy.  However, after the first caution, Tandy was able to get Jordan back.  It didn’t seem like it at the time, but Tandy’s pass ended up being the pass for the win.  While Jordan Taylor and Antonio Garcia were never far behind, Tandy and Tommy Milner led the rest of the way to pick up the class victory by just over a quarter of a second.

In GT Daytona, CarBahn Motorsports with Peregrine Racing’s Richard Heistand lead from the pole with ease.  However, the fastest car in class couldn’t really show what it could do.  On the first lap, there was a three-wide squeeze play at turn 3 between Compass Racing’s Jeff Kingsley, GRT Grasser Racing Team’s Misha Goikhberg and Gradient Racing’s Till Bechtolsheimer.  Contact was made between Bechtolsheimer (in the middle) and Kingsley on the outside.  Kingsley spun his Acura and was hit by Goikhberg and Alegra Motorsports’ Michael de Quesada.  Kingsley would continue and eventually finish ninth in class with Mario Farnbacher.

De Quesada’s adventures were far from over.  The damage from the first lap contact resulted in debris flying off of his Mercedes on Strand Drive.  Later on, he had contact with Team Hardpoint/EBM’s Rob Ferriol exiting turn 5, resulting in Ferriol crashing out of the race and bringing out the first full course caution of the race.  All of this happened in the first 10 minutes.

Early on, Heistand’s closest competition was the Lexus of Vasser Sullivan’s Frankie Montecalvo.  However, Montecalvo spun in turn 8 on the restart after contact from Madison Snow.  Trying to get turned around in a small area behind the wall ultimately cost Montecalvo a lap and any real chance at contention.  Snow was apportioned blame for the incident by IMSA officials and had to serve a drive-through penalty.

Montecalvo’s spin put the Aston Martin of The Heart of Racing’s Roman DeAngelis into second.  Heistand pulled out about a two-second lead on DeAngelis and was able to hold it there.

When the sole GT Daytona pit stops were made, Turner Motorsport’s Bill Auberlen was able to jump the Aston Martin now driven by Ross Gunn to move into second.  However, even Auberlen, IMSA’s all-time leader in class victories, could not keep pace with Jeff Westphal in the No. 39 Audi.

Auberlen’s failure in the final 10 minutes put Gunn back up to second in class for the final restart, but Gunn could do nothing with Westphal as he pulled away to take the win on the track by 5.713 seconds.

Everything seemed so perfect for the Audi team until post-race inspection.  The car was fine, but the team’s refueling rig failed inspection.  In 2018, IMSA created official minimum fueling times for each class.  During the Rolex 24 at Daytona that year, they had a “suggested” minimum refill time of 40 seconds for the GT Daytona class.  Everyone was more or less in that range, except for the Montaplast by Land-Motorsport team, who were filling up their Audi much more quickly.  There was no official rule against that at the time, but IMSA still assessed a five-minute stop-and-hold penalty to the team in the 10th hour under the guise of a homologation violation.  This scenario was described in more detail below.

Today, GT Daytona teams cannot completely fill their fuel cells on pit stops faster than 40 seconds under any circumstances.  Inspectors determined that CarBahn Motorsports with Peregrine Racing’s refueling rig was filling up their Audi too quickly.  As a result, the team was stripped of victory and moved to the rear of the field.

The penalty grants victory to DeAngelis and Gunn.  It is the first IMSA WeatherTech SportsCar Championship victories for both drivers.  They ended up 3.73 seconds ahead of Goihkberg and Marco Mapelli, who quietly recovered from Goikhberg’s first lap contact to post an excellent run in a new chassis following their Sebring crash.  Bechtolsheimer and Marc Miller finished third, their best-ever finish in GT Daytona.  Vasser Sullivan’s Aaron Telitz and Jack Hawksworth recovered from wall contact in qualifying to finish fourth, while teammates Montecalvo and Townsend Bell recovered from their early spin to finish fifth.

The IMSA WeatherTech SportsCar Championship takes a week off before traveling to Watkins Glen for the first of two visits to Watkins Glen.  The Sahlen’s Six Hours at the Glen is scheduled to go green at 10:40 a.m. on June 27.  Coverage will be streamed live at NBCSports.com and NBC Sports TrackPass, while delayed coverage will air that evening at 7 p.m. ET on NBCSN.