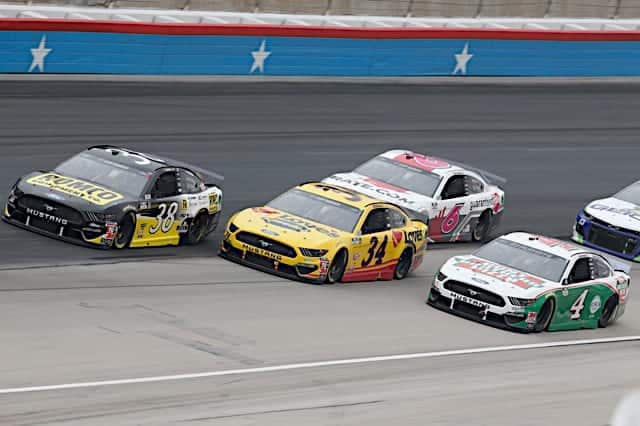 Texas may have lost one of its points-paying dates, but it gained one of NASCAR’s landmark events for 2021 in the form of the June 13 All-Star festivities.

Eligibility for the annual race, long held at Charlotte Motor Speedway before moving to Bristol Motor Speedway in 2020 and then to the Lone Star State, is attained in three ways: 1) Drivers who have won points-paying races in 2020 or 2021, 2): Past Cup Series champion or 3) A previous winner of the All-Star Race all automatically qualify.

The remaining four spots are decided by the All-Star Open, held about two hours in advance of the main event. Split into segments, the winner of each will move on to fill a trio of the berths, alongside the Fan Vote winner. On Wednesday (June 9), NASCAR revealed that the top five vote-getters were (listed in alphabetical order) Chase Briscoe, Matt DiBenedetto, Erik Jones, Daniel Suarez and Bubba Wallace.

Ross Chastain‘s car failed inspection and he will start at the back for the Open.

Chastain crew chief ejected for aero duct openings not conforming to specifications. Chastain will drop to the rear for start of the open.

A new format was unveiled for the 2021 edition and is as follows, per NASCAR:

A random draw for the starting lineup yielded the pole to Kyle Larson, the winner of the past two points races this season and the 2019 All-Star Race winner. Larson raced his way into the main event through the Open and essentially ran the table in Charlotte’s most recent time playing host.

Kyle Busch, the 2017 winner, rolls off second, followed by Christopher Bell, Cole Custer and Austin Dillon to round out the top five.

Last year’s All-Star Race, the first at Bristol, was won by Chase Elliott. William Byron and Aric Almirola won the first and second segments, respectively, while DiBenedetto won the third and Clint Bowyer transferred via the fan vote.

Hendrick Motorsports, Joe Gibbs Racing and Team Penske each have their entire stables locked into the race.

TV coverage from Texas Motor Speedway begins with NASCAR RaceDay at 5 p.m. ET on FOX Sports 1.  The All-Star Open is at 6 p.m. ET, while the main event is at 8 p.m. ET tonight after a second edition of NASCAR RaceDay.