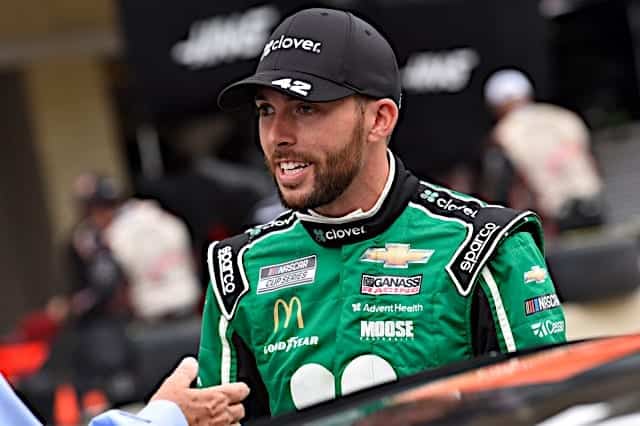 Ross Chastain, Tyler Reddick and Aric Almirola won the first, second and final rounds, respectively, of the All-Star Open to qualify for the main event. Matt DiBenedetto, who ran well in the Open, won the Fan Vote to secure the No. 21 as the 21st and final spot i an the All-Star Race’s lineup.

The 97-degree day begat a 145-degree on-track temperature and a race with a caution-filled opening segment.

Chaos erupted just moments into the opening round of the Open, with Chris Buescher hit with a drive-through penalty for getting to the start-finish line before pole sitter Reddick. Austin Cindric was also penalized for changing lanes before the green flag flew.

Three cautions peppered the opening segment, with the first on lap 4 when Bubba Wallace spun without contact. That was followed by a yellow less than a lap after the following restart for a Buescher spin after contact from Ricky Stenhouse Jr. Meanwhile, Chastain started at the back after issues during inspection and was up to sixth by the third restart.

Round 1’s biggest incident occurred on the 13th circuit, when Erik Jones spun underneath Chase Briscoe and Daniel Suarez couldn’t avoid him, causing terminal damage to both cars.

Reddick, who had led from the first lap onward, started alongside Chastain on the final restart with two laps to go. Chastain spoiled the No. 8’s domination in the segment, stealing the lead and pulling away to lock himself into the All-Star Race.

Reddick picked up where he left off from Round 1. Any battles in the second segment were waged behind the leader.

DiBenedetto ran second until a charge from Austin Cindric, heir to DiBenedetto in the Wood Brothers Racing No. 21, occupied his attention, but he held off the No. 33 until Almirola scooted by both of them.

Almirola inched close to Reddick but could never quite get there, settling for second in the segment as Reddick locked himself in.

Almirola then inherited the lead with Reddick’s removal, never looking back. Buescher and Wallace had rebounded back into the top 10 from their earlier issues, but Buescher dueled with DiBenedetto for second and the No. 10 sailed away to take the checkered and secure a berth in his fourth All-Star Race.

After the race, the FOX Sports 1 booth dialed up DiBenedetto and informed him that he had won the fan vote, thereby completing the 21-car field for the main event. Kyle Larson and Kyle Busch are set to lead the field to green for a six-segment, three-inversion race.

The 100-lap All-Star Race will get going right around 8 p.m., with pre-race festivities airing prior to it on FOX Sports 1.

Wallace showed in the open he can’t hang with even the back runners. Did he really think he’d get the fan vote after the way he mouths off. Jordon better wise up or sponsors will soon leave the team. They like winners. I heard jordon said the same thing.

NA$CAR showed how racist they are when they didn’t bestow the fan vote to Bubba. There will be repercussions from all over America.

By the way, I (and Bubba) were absolutely flabbergasted that Bubba didn’t get the vote, even though I thought Matt was the most likely to get it.

On a more important note:

On their first date a guy asks, “Do you like Kipling?”

The fan vote got it right. It’s not racist if you don’t vote for Wallace. He had 3 chances to race his way in. He needs to go back to the truck series where he might stand a chance of winning. This b/s racist word gets throwed around way to much.

I was being sarcastic about Flubba. There will be a sequel Son Of Flubba down the road. Like has been already stated, a lot of people were stunned at the “fan” vote not being youknowwho.

All the folks I spoke with was not stunned at all. Jordon can’t buy Wallace any wins or friends. It takes hard work and very little whining. It took the king petty 3 years to figure out how to say goodbye by offering Wallace a partial contract knowing he did’nt want that. It took the prank moose bullshit to bring it to a head. I heard there is a kiddie go-cart track in Montgomery alabama that might take him.