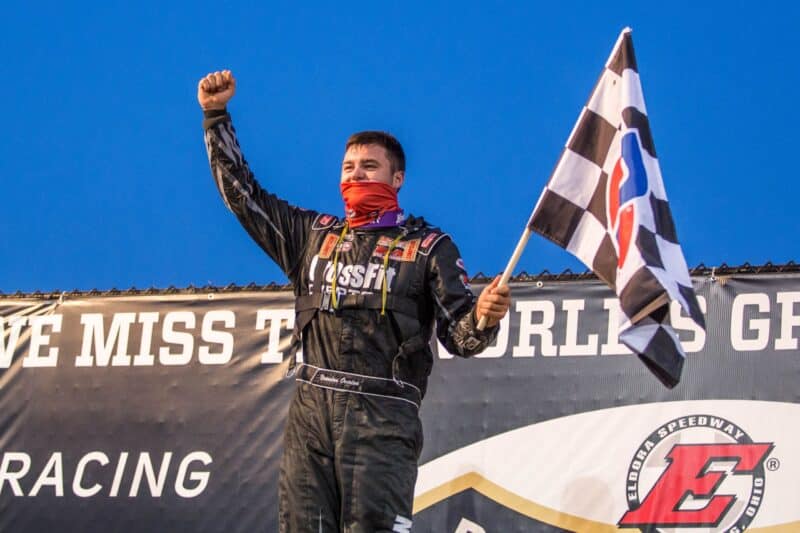 Brandon Overton served the state of Ohio its biggest ass-whooping since Alabama/Ohio State. That is all.

Spotlight: 2021 Dream
Where: Eldora Speedway – Rossburg, Ohio (streamed on FLORacing)
Why We Chose It: At $127,000-to-win, the largest purse of the 2021 dirt racing season and the third-largest purse in super late model racing history.

After an opening 60 laps that met every definition of an instant classic, Overton finally bested polesitter Brandon Sheppard on lap 61 and then ran away from the field, comfortably scoring the biggest win of his super late model career and his 13th of the 2021 season.

The podium finishers took opposite routes to get there; runner-up Tim McCreadie was a slow and steady mover throughout the 100-lap feature, while Kyle Bronson struggled on restarts but proved the fastest car on the track on the high side whenever he could get his No. 40 machine wound up.

Though Sheppard led the opening 60 laps from the pole, his No. 1 car was side-by-side with Overton for nearly the entirety of the feature race, in fact saved on several occasions by timely yellow flags from losing the race lead. Side-by-side racing was plentiful on Thursday night, aided in part by mother nature; though Thursday’s program was elongated by rain, the rainfall that fell on the Eldora race surface left the track in pristine condition for the feature event.

Kyle Larson was invisible for much of the race but made his charge after a lap 61 restart, entering the top five before spinning himself out after overdriving turn 1 on lap 64. Larson would finish 13th in his first Dream feature start.

Spotlight: 2020 Dream preliminaries
Where: Eldora Speedway – Rossburg, Ohio (streamed on FLORacing)
Why We Chose It: After as good as the racing was at Eldora Thursday night, we wanted more.

The first of two 25-lap, $10,000-to-win preliminary features Friday night at Eldora saw more of the same, with Overton turning the first A-main of the evening into a snoozer. His third win of the weekend bumped the earnings of the No. 76 team to $147,000 in a three-day period.

The second feature finally broke the hegemony of a No. 76 up front, with Gregg Satterlee besting Shannon Babb on a restart inside of 10 laps to go to score arguably his biggest win of 2021.

Spotlight: 2020 Dream (rescheduled from last year due to COVID closure of Eldora Speedway)
Where: Eldora Speedway – Rossburg, Ohio (streamed on FLORacing)
Why We Chose It: At $126,000-to-win, by far the highest-paying race in the country Saturday night.

Saturday’s feature played out much like Thursday’s before it. The polesitter (this time Darrell Lanigan) got out front and stayed there, leading much of the first half of the race (in this case the first 52 laps) before Mr. Overton got out front, taking the lead with a pass exiting turn 2 on lap 53 and riding off into the sunset.

A lap 74 restart saw a plot twist, with Chris Madden coming out of nowhere to seize the race lead from Overton, a challenge that the No. 76 car hadn’t seen all weekend once it managed to get out front.

The suspense was short-lived, however. It wasn’t long before Overton took the lead back and drove away for good, sweeping the weekend at Eldora to net $273,000 in winnings.

Outside of super late model national win leaders Overton and Jonathan Davenport, McCreadie and Dale McDowell were the only two other drivers to score top 10 finishes in both Dream features over the weekend.

The money and trophies speak for themselves. But Thursday night, watching Overton effectively able to stalk a driver the caliber of Sheppard (the defending World of Outlaws Morton Buildings Late Model Series champion) for more than half a feature, then drive away with no concerns for tire wear was a mature, composed performance against the strongest field of late models 2021 has seen. Overton not only won, he won with authority. That he did the exact same thing on Saturday, this time dispatching of current WoO late model runner-up Madden was icing on the cake. If the LOLMDS and WoO LM tours do in fact sanction a super series in the near future (more on that later), Overton damn well better tour with them.

A shout out to Madden as well, for rebounding from a wreck-filled outing on Thursday to be a real factor in the weekend finale. Madden’s No. 44 was the only car that seemed to have anything for Overton once he got out front.

For all the excitement Bronson’s banzai charges on the high-side created during Thursday night’s feature, the undisputed hard charger of the evening was instead one Dennis Erb Jr. Erb went from 23rd to fourth in the first B-main, then got bumped up to third once Ross Bailes failed at the scales and lost the last transfer spot in the feature. Once in the feature, Erb progressed from 25th to sixth by race’s end.

They call Jason Feger the “high-side hustler,” but this incident Thursday night isn’t what they meant.

Another angle of Jason Feger's brutal crash. Good to see him walk away from the scene! #DLMDreams pic.twitter.com/wDNh2lX9W1

The B-mains were perhaps crueler to no driver than Bailes, and in a variety of ways. Thursday night, Bailes had secured a transfer spot and was on his way to the feature, when his post-race date with the scales showed a car that, while less than 10 pounds under minimum weight, was light, and thus tossed from the feature event. In the first B-main as well on Saturday, Bailes didn’t make it two laps before getting turned head-on into the backstretch wall.

A hard hit for @RossBailesRacin in the first B-Main ends his run for $126,000 in the 26th DLM Dream @EldoraSpeedway.#DLMDreams pic.twitter.com/DcQnJpTBh2

The “smooth operator” had anything but a smooth weekend in Ohio. Bobby Pierce, a driver who has dominated extended-length dirt races in 2021 (he won the Illini and the Hawkeye 100), fell victim to throttle issues in Thursday’s feature that saw him bring out two caution flags. That was likely desirable when compared to his outing on Saturday, however, when Pierce got collected after Ricky Weiss overdrove turn 1 and left the No. 32 with nowhere to go.

Scott Bloomquist is the all-time winningest driver of the Dream, but he and Team Zero were utterly irrelevant over the course of the weekend, apparently to the joy of some of the fans at Eldora.

After missing Thursday’s feature when his car’s rear end failed in the second B-main, Bloomquist finished a distant 18th in Saturday’s feature after having to pit mid-race for a tire change. It was even worse for Bloomquist’s teammate Kyle Strickler, who followed up a disastrous showing Wednesday where they missed their heat race lineup with a hard crash in turn 1 that collected Feger. The wreck was destructive enough that Strickler was forced into a backup car for Saturday’s program.

Eldora Speedway having a scoreboard atop their scales that allows race fans to see what the officials are seeing and decreeing in real time is the single greatest innovation I have seen at a dirt track in recent memory. Every racetrack in America should have this done immediately.

It didn’t take long after Overton completed his weekend sweep for dirt racing Twitter to blaze with hyperbole over the scope of the accomplishment.

Look, Overton deserves credit for scoring consecutive wins under the pressure of a major-money race and contested by the strongest field of super late models assembled since East Bay’s Speedweeks residency. But there is a very big difference between winning a crown jewel, coming back a year later and doing it again, rather than just doing it again. Instead, doing it twice in four days allows for momentum, familiarity with the racing surface and recent notes all to play a part that they would not if the “Dream” occurred 52 weeks later rather than less than 52 hours later. Overton made a statement to the dirt racing world. He didn’t immortalize himself doing it.

I can’t help but wonder if Davenport was relieved not to score a Dream win over the weekend. If I had made a deal with my wife that winning a race means that she gets a pet llama (read, an animal that spits), I’d be happy with a couple top 1os as well.

Given how many flat tires the field endured over the course of four nights at Eldora, I can understand playing it safe with debris on track. But treating a wayward beach ball that made it onto the track during Friday’s second heat like the wayward Tropicana Orange that threatened to engulf Todd Szegedy’s Xfinity Series car at Chicagoland 15 years ago was a little much.

FLORacing’s coverage of Dream weekend was a high water-mark for any online streaming provider. Tons of camera angles, replays, knowledgeable commentary, this broadcast felt like a major event and wouldn’t have been out of place on network TV. Very very well done to all involved. Hearing the call of “Brandon Sheppard, Brandon Overton and Brandon, Fla.’s Kyle Bronson” during a three-wide battle for the lead was Squier-esque.

52 minutes into SRX’s first broadcast, which was running simultaneously with the Dream B-mains Saturday night, and “Danica” was trending on Twitter. Have fun with your new toy Smoke, I’ll stick with the Big E.

FLORacing made a point to document that officials from the Lucas Oil Late Model Dirt Series were in enemy territory for this weekend’s dream, which is rival World Racing Group territory. This is good news for dirt late model fans across the country, however, as the two series are in active collaboration to homogenize their rulebooks to make super late models all but interchangeable between the two series. There is no reason not to do this, and I commend the two sanctioning bodies for working together, as it will only help car counts. Now, if we can get them to co-sanction a “super” super late model tour, we’ll be in real business.

I wish I could have given Logan Roberson and his crew a shout-out for something better than this (Roberson is a regular at my home track in Winchester, Va.), but I’ll still give his crew credit for coming up with a way to get physical without getting physical. This is how to control your pit.

Things just got a little heated in the pit area @EldoraSpeedway. ?@ThuggNasty17 and @BrentLarsonB1 had a brief discussion with one another in the pits following tonight’s first B-Main.#DLMDream pic.twitter.com/9TeQCSWRNi

The FLORacing broadcast made a point to announce early in Saturday’s program that a rule change/emphasis would be to automatically penalize any driver that intentionally brought out a yellow without actually suffering a flat tire. How the hell was that not already a rule?

5 – number of tires race teams were limited to for the weekend’s Dream events as a shortage of dirt-racing tires continues to grip the United States.

8 – the number of pounds light Bailes’s No. 79 was after the B-main Thursday night, costing Bailes a spot in the feature field.

Where it Rated (on a scale of one to six cans with one a stinker and a six-pack an instant classic): We’ll give the weekend four and a half of Eldora’s (in)famous Toilet Waters. Thursday’s feature had the makings of the race of the year for its first 60 laps, and remained a compelling display of side-by-side racing even after Overton took the race lead for good. Doing it twice and not as well the second time felt very anticlimactic.

Up Next: We’ll be back to our regular cross-section coverage of dirt racing, with the midweek highlight coming courtesy of a $6,000-to-win Tuesday night sprint car feature at the Sharon Speedway for the All-Star Circuit of Champions. Coverage will be provided on FLORacing. Say it with me everyone, we want Blaney!