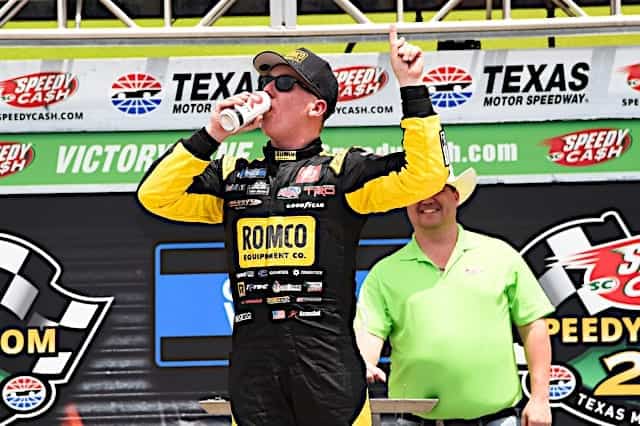 In a Nutshell: John Hunter Nemechek is pretty good at this truck racing thing.

Nemechek led nearly half the laps of the NASCAR Camping World Truck Series’ SpeedyCash.com 220 on Saturday (June 12) afternoon at Texas Motor Speedway, kicking off a solid day for team owner Kyle Busch all around: Busch went on to win the Xfinity Series’ event later that afternoon. The former victory, though, was the No. 4’s fourth overall and second straight triumph of the season, coming 15 days after he also dominated the series’ race at Charlotte Motor Speedway.

“I feel like we’ve been making a statement all year,” Nemechek told FOX Sports 1 after the race. “I feel like we’re one of the favorites every time that we show up to the racetrack. … Everyone does so good with building our trucks, I’m just lucky enough to be behind the wheel. It’s amazing to get win No. 4 here. I haven’t won with Romco Equipment on board yet in my career so finally we were able to get them a win.”

Nemechek was trailed by Chase Elliott, who came home second in his first Truck Series start of 2021.

Elliott led 45 laps in his debut race with sponsor Adrenaline Shoc, which will appear on his Cup Series car later this year. Elliott took control of the middle portion between stints of Nemechek leading, out front for 14 laps in the first half of the race and 31 in the latter half. Elliott never won a stage, but moved through the field quickly after starting 22nd. He reached the top 10 before lap 20, but with Nemechek’s stellar race he couldn’t quite get to the front. Elliott finished second, 3.361 seconds back from the No. 4.

Here's what happened between Stewart Friesen and Carson Hocevar in Texas: https://t.co/Epe6GuErzh pic.twitter.com/81Tyg8PWhb

Drew Dollar climbs out and is okay after a hard hit in Texas. pic.twitter.com/xFA4ZZ48nR

No. of rookies in the top 10: 1 (Chandler Smith, finished fifth)

Rookie of the race: Smith

Point report: The top two stay the same (Nemechek and Rhodes), but Front Row Joe’s son extended his lead by 34 points with Rhodes’ 26th-place finish. Chandler Smith leapfrogged Sauter and Austin Wayne Self to secure the 11th spot in the standings, while Creed dropped out of the top five with his dismal afternoon.

Enfinger also jumped two spots, continuing to capitalize on his part-time schedule. Hocevar still sits 10th, while Deegan plummeted a couple spots after a run outside the top 20.

Spotter: “5 tenths better then next truck, don’t let his dirty air hurt you”

Our guys brought me another super fast truck, and I missed timed a hole and wrecked it. ??‍♂️

.@joshberry, in the No. 25 @RackleyRoofing @TeamChevy, will finish the @NASCAR_Trucks Series #SpeedyCash220 at the @TXMotorSpeedway in the 11th-place. #NASCAR | @NASCAR

Up next: It’s been a month shy of a decade since the Truck Series has visited Nashville Superspeedway. The top five the last time they were there? Austin Dillon, Sauter, Timothy Peters, Nelson Piquet Jr. and Parker Kligerman.

The series’ return is set for this coming Friday, June 18 at 8 p.m. ET. Coverage will be on FOX Sports 1.