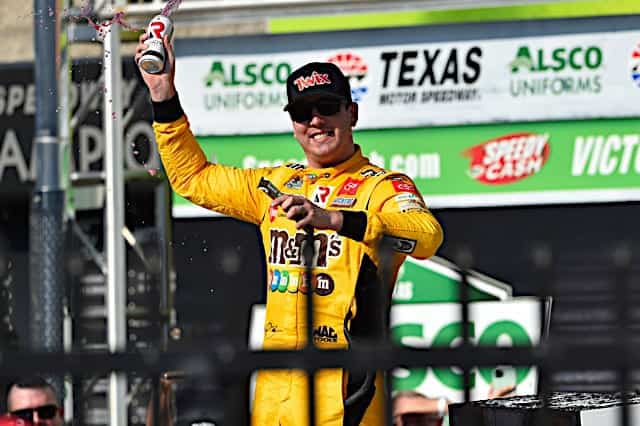 It was a hot day in the NASCAR Xfinity Series’ ALSCO Uniforms 250 at Texas Motor Speedway, the hottest race in series history at the 1.5-mile track. Kyle Busch fought for the lead on most of the restarts in the race, ultimately holding off Justin Allgaier in overtime to take his 10th Xfinity win at Texas.

Busch began the race 14th but quickly moved through the field in stage one, taking the lead from Joe Gibbs Racing teammate Brandon Jones on a lap 26 restart after the competition caution. However, his car didn’t stay out front for very long as Austin Cindric got around him for first, winning stage one.

The No. 54 got back to the lead on the following restart and held on to win stage two. This time, Daniel Hemric got out front ahead of Busch when the race went back to green. This was short-lived, though, as Busch regained control on a lap 98 restart.

Allgaier began to show his strength on lap 117, taking first away from Busch. Another couple of caution flags would fly and the two would continue to swap positions until the green-white-checkered finish. Cindric pushed Busch to the lead on the bottom, allowing the No. 54 to keep first place over the No. 7 JR Motorsports car.

Busch led 94 of 171 laps to earn his 99th career NXS victory and second of the 2021 season, inching ever so close to the century mark.

Noah Gragson took home a much-needed seventh place after running near the front most of the race. After not even completing a lap last week at the Mid-Ohio Sports Car Course, Gragson started all the way back in 30th. He weaved his way through the field from the start, moving into the top 15 by lap 17.

Eventually, Gragson got into the top 10 by lap 40, just before the end of the first stage. His pit crew made some good changes to the No. 9 Chevrolet, allowing Gragson to creep ever so close to the top five. Though he wasn’t as fast as Allgaier, he still stayed up around fourth place until the final nine laps.

It was Gragson’s sixth top 10 of the season and broke a streak of four results of 15th or worse, including three did-not-finishes. He now sits ninth in the point standings with 12 races left before the playoffs.

A promising day quickly turned bad for Jeb Burton, who crashed on lap 61 after some contact from Josh Berry. Burton had heavy front-end damage after hitting the inside wall and ended up finishing a disappointing 32nd. He wasn’t happy with Berry, even though the No. 8 JR Motorsports driver apologized for the incident.

Here's what happened at Texas between Jeb Burton and Josh Berry: https://t.co/mY1JwiLzRV pic.twitter.com/03RKMuXNW9

Jeb Burton had a chat with Josh Berry with Berry still in the car. pic.twitter.com/rqCuy9GC5z

Myatt Snider also had an encounter with Berry and suffered a similar fate, though this happened much later on in the race. Snider had rallied back from 32nd at one point to enter the top 10 around lap 66. He kept the No. 2 Richard Childress Racing car in that position throughout the race, but on lap 158, Snider spun around, crunching the inside wall.

His strong run ended there, putting him back in 33rd place. It was Snider’s sixth-consecutive finish of 16th or worse, with his last top 10 (ninth) coming at Talladega Superspeedway in April. He still has the win at Homestead-Miami Speedway to keep him in the top 12 for the playoffs, for now at least.

Crashes were definitely ugly here today; one of those involved Jeffrey Earnhardt and Stefan Parsons, who got loose coming off a corner on the backstretch and collided with the No. 0 JD Motorsports car. Earnhardt seemed to suffer the worst of it as they both ventured into the inside wall, ending their days.

However, one of the biggest wrecks of the day involved Gray Gaulding and Tanner Berryhill, who got together on the frontstretch. Both cars had severe damage to their cars, though Gaulding’s No. 52 seemed to get the brunt of it. After Berryhill hit Gaulding, the No. 52 went and hit the outside wall, then came across the infield and hit the inside wall, coming to a stop. Gaulding got out of the car, while the No. 23 went to the garage.

Harrison Burton also spun late in the race while running in the top 10, crashing hard in turn 2. His rear end suffered significant damage and he finished 30th, a rough end to the fall 2020 Texas winner.

An honorable mention for ugliest part of the day was the heat, as temperatures began in the mid 90s outside the cars. Inside temps reached all the way into the 140s — extremely high heat for these drivers. Many of them wore cool suits, special clothing with tubes inside designed to help them cool down while racing. Still, it was a rough and muggy afternoon, and the heat’s effects were shown on drivers’ faces, especially race winner Busch.

The lone underdog in the top 10 was Brett Moffitt and his No. 02 Our Motorsports car. Moffitt, who contended up front most of the time, earned his fifth top 10 of the season. He gained 11 positions to finish in eighth, breaking a four-race streak of finishes outside the top 10. It was a good rebound for Moffitt after finishing 31st last week at Mid-Ohio due to fuel pump issues.

Ryan Sieg narrowly missed out on his seventh top 10 of the year with an 11th-place finish. Brandon Brown was 13th, Jeremy Clements got 14th and Landon Cassill earned his fourth top 15 of 2021, six spots above where he started.

”I don’t care what he said, I’ll see him after the race.” – Jeb Burton responding to his team when Berry apologized for getting into him.

”All in all, such a good car. I was just able to think through a few things there on a couple of restarts that may or may not work, but there at the end, they did.” – Kyle Busch to Fox Sports after winning.

”It was nice to go out there and have a really solid day. We had a good day and made Kyle beat us. He’s a really good driver and he just beat us today.” — Allgaier talking to Performance Racing Network after the race.

The Xfinity race was entertaining as usual, even with Busch winning. There were multiple battles for the lead as well as other positions throughout the field. The extreme heat seemed to spice up the action — and probably the traction compound — quite a bit. It helped that the Camping World Truck Series competed right before NXS, and it seemed that the PJ1 got more grip as the race wore on.

However, it still felt like it caused some drivers to get loose, like Parsons on the outside of Earnhardt as they came off of turn 2.

The heat, however, was too much. This race needs to move back to the spring for all series if they want to continue racing there twice a year. For it to be the hottest Texas race in Xfinity history, it’s not great for the fans or drivers. There’s only so much everyone can do to prepare for this.

For the first time since 2011, the Xfinity Series heads to Nashville Superspeedway next Saturday, June 19. Television coverage switches to NBCSN starting at 3:30 p.m. ET.

This shows how far behind most Xfinity teams are with talent in drivers. All the cars are basically the same.