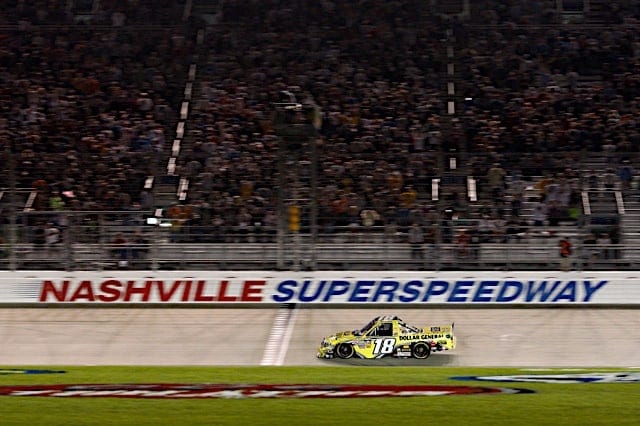 The NASCAR Camping World Truck Series heads to Music City for its first race at Nashville Superspeedway since 2011.

Forty-three trucks are on the entry list as qualifying is set to determine who gets in and who goes home.

Keith McGee will make his fourth start of the year behind the wheel of Jordan Anderson Racing’s No. 3 Bud’s/KEES Travel Chevrolet.

In a search for more seat time, three Cup drivers will make starts this weekend ahead of their race on June 20. Ryan Preece will attempt his Truck debut for David Gilliland Racing in the No. 17 Hunt Brothers Pizza Ford. Seven-time series winner William Byron will attempt his first Truck start since 2016 for Rackley WAR in the No. 27 Chevrolet. 2019 title runner-up Ross Chastain returns to the seat of the No. 45 Chevrolet for Niece Motorsports for the second week in a row.

Josh Berry will appear in the No. 25 Rackley Roofing Chevrolet for Rackley WAR for the second consecutive week.

Bret Holmes will take his self-owned team to the track in an attempt to make his fifth start of the season. Holmes will drive the No. 32 Southern States Bank Chevrolet.

Lawless Alan returns to the No. 34 AUTOParkIt Toyota for Reaume Brothers Racing in his third appearance of 2021.

Drew Dollar is scheduled to make his fourth appearance for Kyle Busch Motorsports in the No. 51 Sunbelt Rentals Toyota.

Ty Majeski will attempt his second start of the year for ThorSport Racing in the No. 66 Toyota.