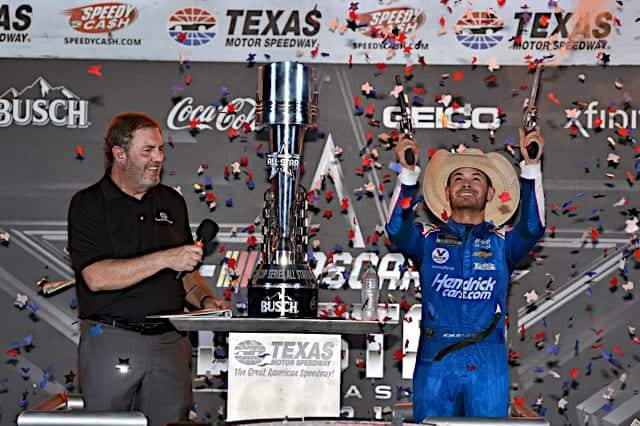 Kyle Larson is good at winning. Okay, so that seems like an obvious statement, but it really holds a lot of truth. His prowess on dirt became nearly legendary last year during his NASCAR suspension, and he’s wheeled the Hendrick Motorsports No. 5 into victory lane for three weeks in a row.

One can’t help but speculate just how much Larson’s abilities elevated the Ganassi No. 42 during his tenure there. In nearly two decades of the ride existing, Larson is responsible for all but two of the wins it accumulated. Furthermore, since his abrupt departure, the team has floundered in mediocrity despite both a past champion and an aggressive young upstart getting behind the wheel.

But enough of the speculation. We deal in facts around here, so check out some notable numbers from last weekend’s money grab.

Brad Keselowski and Martin Truex Jr. have a combined two championships, 65 Cup Series wins, and 24 starts in the All-Star Race between the two of them. However, they have just five top-five finishes and zero wins in those 24 starts. Since the All Star Race began back in 1985, only two drivers have won the series title without winning an All-Star Race: Alan Kulwicki and Dale Jarrett.

Kulwicki only had four attempts in his tragically abbreviated career, but Jarrett came up short in 17 tries across almost every conceivable format. Now, Keselowski and Truex find themselves reaching a similar level of futility. Thankfully for both, they’ll probably have a few more shots at it.

The championship connection with the All-Star Race doesn’t end there, but there are a number of non-champions that have a victory in NASCAR’s most prestigious exhibition race. Davey Allison, Geoffrey Bodine, Michael Waltrip, Mark Martin, Dale Earnhardt Jr., Ryan Newman, Kasey Kahne, Jamie McMurray, Carl Edwards, Denny Hamlin and Larson have won the big bucks that accompany the All-Star trophy, but never a Cup title. However, both Larson and Hamlin have a very realistic chance of removing their names from that list in the near future.

Larson also became just the eighth driver to win the race multiple times, and just the second to win twice in his first five attempts after Jeff Gordon won in his second and fourth appearances back in 1995 and 1997.

Kevin Harvick started his 21st All Star Race, leaving him just three short of the all time record set by Mark Martin. Harvick, a two-time winner, has been eligible every year of his Cup Series career.

Kyle Busch won the Xfinity Series race at Texas and moved just one win away from the century mark. Busch, who won his first race in 2004, has the benefit of compiling the majority of those victories prior to the implementation of more stringent participation limits. With Cup drivers unable to race full seasons anymore, it’s very unlikely that anyone will ever match his total in Xfinity or Trucks. While it’s easier for full time Xfinity competitors to rack up wins now, a driver won’t even get close to that many before they too become a Cup driver.

While Ben Rhodes did struggle en route to a 26th place finish at Texas, he still managed to keep his total number of laps run at nearly 100%. Rhodes has finished on the lead lap in every event but two. In the first, at Atlanta, he was one lap down at the checkered flag, and Texas saw him six laps off the pace at the conclusion. That said, out of a possible 1,425 circuits, Rhodes has completed 1,418. Couple that with the fact that Rhodes is one of just four championship-eligible drivers who have won in 2021 and things are looking good for the 24 year old ThorSport wheelman.

And Kyle continued on Monday in a Sprint Car race in Ohio against some of the best. At some point you have to admit his talent and drive to win.

Thanks, I didn’t realize he raced again Monday. I knew he raced Friday and Saturday at Eldora. As he said, he just wants to race, he doesn’t care what.

Larson driving dirt races is no different than Kyle Busch running NXS and Truck races. Of course, Larson is now the favorite of the NASCAR political base since being seen as “victim.”

Tom B
Reply to  jobe

Jobe,
You don’t have any idea how good the current Sprint Car drivers are. It is not like Busch running NXS and Truck races. Your comment proves you are just a hater or just trying to stir the pot. A real knowledgeable race fan wouldn’t say anything that stupid.

jobe
Reply to  Tom B

What I DO know is that Kyle Busch owns his own Truck team in which he has developed drivers for Cup careers. Kyle Larson owns his own Sprint Car team as his own plaything. I also suspect that Rick Hendrick is diverting sponsorship money from his other 3 cars to fund his racist driver in the #5 car. Only a real racist would be so stupid as not to see that.

jobe
Reply to  Tom B

We know what you are.