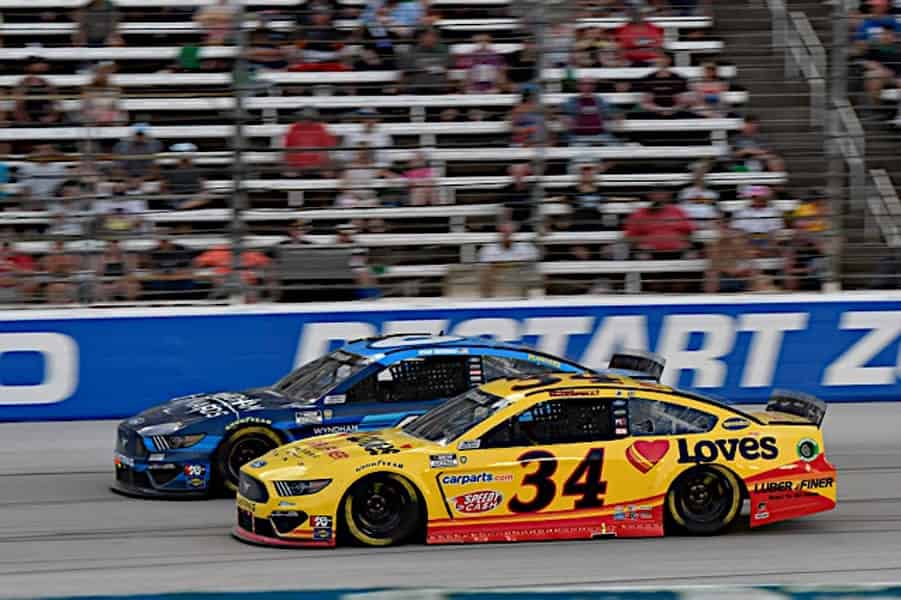 Michael McDowell on track at Texas for the All Star Race (Photo: Nigel Kinrade Photography)

All three NASCAR series headed to the Lone Star State for dates at Texas Motor Speedway this weekend. This time, however, things felt different.

TMS has typically held the first weekend in April, but this year NASCAR shifted the schedule around. While the track’s fall playoff date remained intact, the usual spring points race was removed. Instead, the 1.5-mile track landed a date in June so it could host the annual All-Star race (June 13). It was the second year in a row that the ASR venue changed after Bristol Motor Speedway played host last year. Meanwhile, both the NASCAR Xfinity and Camping World Truck series held points races on Saturday, June 12.

The change was not only felt by race teams, taken from their home base near Charlotte, N.C. but also in how the Texas heat affected everyone. The Dallas/Fort Worth area in Texas usually has cooler temperatures in April. The June date wore brought summer heat, with real feel temps reaching over 100° F. Track temps got up to 150° F, bringing back the original theme of the All-Star race that was coined as “One Hot Night.”

The stunning heat was felt by most teams, but especially the underdogs racing in the NASCAR All-Star Open under the sun trying to fight their way in the main event. Unfortunately for many of these small teams, the heat played more of a factor than just sweaty drivers and melted ice packs.

Michael McDowell carried the banner for the underdogs in the NASCAR All-Star Race thanks to his upset Daytona 500 win. However, unlike many underfunded teams who make the main event, McDowell was able to hold steady.

McDowell’s All-Star weekend was quite a contrast from last year when he had to try and race his way into the big show in the All-Star Open. During the first segment of the race, McDowell collided with Bubba Wallace, who was then driving the No. 43 for Richard Petty Motorsports. The contact put Wallace in the wall, ending his night and any hope of making the main feature. An unhappy Wallace bashed McDowell in an interview, then left the bumper cover off of his wrecked Chevrolet on the No. 34 team’s hauler. That bumper cover was eventually signed by both drivers and auctioned off for charity.

This year, McDowell did not have to worry about the qualifying race. Instead, he could use any aggressiveness to go grab one million dollars, a pretty fair quest, it would seem. The No. 34 team had to face the likes of the top powerhouse teams in the sport, as well as facing dirty air for most of the night. In round three, however, McDowell once again turned heads like he has all season. Thanks to a field inversion after round two, McDowell got to start near the front. Just a few laps in, he was challenging race leader Matt DiBenedetto for the lead. The Phoenix, Ariz. native gave the Wood Brothers Racing driver all he could handle before losing a couple of spots. It was still a solid showing for such a small team.

And that is what most of the night was for the No. 34 Love’s Travel Stops team: solid. Underfunded drivers who have made the race in the past have struggled to maintain pace. But McDowell ignored those benchmarks and held his own. He never really dropped out of the top 15 after battling for the lead while some late-race jostling allowed him to earn a respectable 12th-place result.

McDowell is having a career year thus far, scoring a win, five top 10s, and a 16.7 average finish through 16 races. Front Row Motorsports’ intermediate program has improved, as the team admittedly wanted to accomplish. A run like this performance should spread optimism for a similar showing at Nashville Superspeedway.

An honorable mention tonight has to go to Spire Motorsports driver Corey LaJoie. While he finished 10th in the final segment of the All-Star Open, LaJoie showed some promising potential early on.

After a crash-filled opening round, LaJoie found himself in the hunt for an upset bid into the All-Star Race. During a two-lap shootout to end the first segment, LaJoie went three-wide on the outside to take third position. The No. 7 Schluter Systems Chevrolet wasn’t able to capture the same momentum the rest of the race, but it was another promising moment for a growing team such as Spire Motorsports.

LaJoie’s teammate Justin Haley never found the front like LaJoie, but still got to the seventh position by the end of the qualifying race. It may not seem like a lot, but for a team that does not have a full-time driver, it was also a good stepping stone for the future.

Austin Cindric was also trying to make his All-Star debut in the No. 33 Pirtek Ford. Cindric was not able to win a segment, but had respectable results of seventh, fifth, and fifth in the segments, reaching as high as second. The defending Xfinity Series champion continues to look for seat time as he will make his first full-time Cup season in 2022. “Not fast enough. Fun to be out there,” Cindric wrote in a tweet.

Erik Jones seemed poised to drive his way into the night’s main event. The Byron, Mich. native drove up into the top three at one point with one of the fastest looking cars on track. Unfortunately, it came to a screeching halt. Jones was fighting rookie Chase Briscoe for second with seven laps remaining in the opening segment. Entering turn 3, both drivers got up into the PJ1 substance, with Jones putting his right side in the traction compound. The air from Briscoe’s No. 14 pulled Jones up, causing him to spin. It looked as if he would slide without harm, but Daniel Suarez nailed the No. 43, ending both of the underdogs’ nights.

“It was just not the All-Star Open that our Richard Petty Motorsports team wanted,” Jones said. “Just made a mistake, got turned around and it ended our day. The No. 43 Petty’s Garage Chevrolet Camaro ZL1 1LE was quick. We were up front and had a shot at it, and it just didn’t play out.”

Bubba Wallace appeared to also have enough speed to race his way into the All-Star event early on. However, the heat’s impact on the track bit Wallace first. The driver of the No. 23 Doordash Toyota was coming through Turn 1 when he slid up into the traction compound. Wallace spun and brought out the first yellow. He would drive back up into the top 10, but could not manage to get above sixth in the end.

Anthony Alfredo competed in his first All-Star weekend. The rookie contender was consistently inside the top 10, but never quite managed to get up into the top five. He finished the final segment in seventh. While the top drivers did not compete in the qualifying race, obviously, Alfredo has shown some solid improvement in recent weeks after a near-miss on a top 10 at Sonoma a week ago.

In the NASCAR Xfinity Series, Brett Moffitt once again impressed in the No. 02 entry for Our Motorsports. The 28-year-old turned in an eighth-place result, his fifth top 10 of the season. After switching his points from the Truck Series to the Xfinity Series, Moffitt sits in 23rd in the standings.

Brandon Brown once again had some impressive stints during the race. Using some strategy at the end of Stage two, Brown restarted the final stage in fifth. He was able to guide his unsponsored No. 68 in the top 10 for most of the race before crossing the start/finish line in 13th. The highlight for Brown though may not have necessarily been his run but rather the video he put together to attempt to attract sponsorship.

Calling all business owners that are interested in breaking into the NASCAR market at a ? ? ? ? price!

Brennan Poole took home top dog honors in the NASCAR Camping World Truck Series race at Texas. While he was mired in traffic for most of the event, Poole used strategy to crack the top five at one point and wound up finishing in 14th after Ross Chastain’s finish was disqualified. It was the On Point Motorsports’ driver’s first start this season after suffering a broken wrist earlier in the year.

While small teams don’t get much time at the front, their paint schemes are among the best. This week’s underdog scheme of the weekend goes to Daniel Suarez in his beautiful No. 99 CommScope Chevrolet. Unfortunately, his car did not end up this way, torn to pieces in that midrace wreck that eliminated him from the event.

No matter what, we plan to race our way in ?

The All Star Open starts Sunday at 6PM ET on @FS1 ⭐️ pic.twitter.com/OTL6rY0fPJ

We’re heading to Nashville, baby! As many await the long-anticipated decision on whether the Nashville Fairgrounds will host a Cup race again, Nashville Superspeedway makes its exciting return to the circuit.

The NASCAR Cup Series has never been to the intermediate track, but it should be a treat to the diehard race fan.

Both the Xfinity and Truck series return, too, running at a track they last saw in 2011.

A new track provides a challenge for many small teams, especially on an intermediate. However, look at drivers such as Suarez, Wallace and Jones to turn in solid runs after some momentum building weekends recently.

Tried ?
Not fast enough. Fun to be out there. Cheering on my teammates now ??@Team_Penske @PIRTEKUSA

It's pretty slick out there. Here's how Erik Jones and Daniel Suárez ended up with damage in Round 1 of the Open: pic.twitter.com/g0fFZ1sqNT