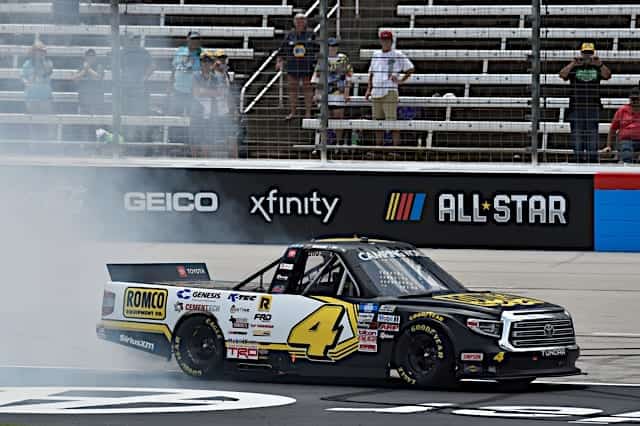 After the previous weekend’s NASCAR Xfinity and Camping World Truck series events at Texas Motor Speedway, NASCAR has released its weekly penalty report that has left one Xfinity team fined and a Truck crew member suspended.

Matthew Moermond, who is listed as the technical director and an engineer for Kyle Busch Motorsports, has been suspended indefinitely for violating NASCAR’s substance abuse policy.

John Hunter Nemechek won the weekend’s truck race for KBM in the No. 4 Toyota Tundra. It was the organization’s seventh victory in 11 races in 2021.

In addition, the crew chief of the No. 8 JR Motorsports Xfinity entry driven by Josh Berry last weekend was fined $5,000 for failing to secure a lug nut that was found post-race.

Two additional penalties were previously reported, both to teams driven for by Ross Chastain. Chastain’s No. 42 for Chip Ganassi Racing in the Cup Series received a $25,000 penalty for an air-duct violation, while his No. 45 Niece Motorsports team in the Truck Series was disqualified post-race for an unapproved throttle body.