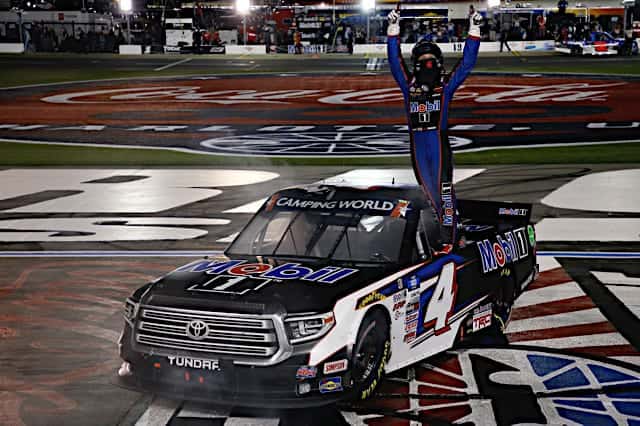 Nemechek made the move from the NASCAR Cup Series back to the NASCAR Camping World Truck Series with Kyle Busch Motorsports in 2021 with many questioning the move.

However, Nemechek has proven so far this season that when given the right equipment, he can win on a regular basis. In his 11 starts this season, he has four wins, seven top fives, and nine top-10 finishes. He currently leads the point standings by almost two full races over Ben Rhodes.

His early dominance of the Truck Series has put him in the conversation for future rides in the Toyota camp. KBM is a Toyota breeding ground for young drivers and Nemechek is still only 24 years old. The rumors that 23XI Racing will expand to a two-car operation in 2022 made us wonder whether the team should hire Nemechek for its second car.

There are other options as well. Veteran driver Kurt Busch has been rumored to that ride for 2022.

Should 23XI hire Nemechek as the driver for their second car? Brad Harrison and Mark Kristl debate what the organization should do if they expand.

Nemechek Has Proven His Worthiness

John Hunter Nemechek is the clear-cut favorite in the Truck Series right now. He has the most wins, top fives, top 10s and laps led. In addition, Nemechek has amassed the most playoff points and could conceivably earn 15 more to begin the playoffs as he holds a 78-point lead in the standings.

His path to the Championship 4 is the easiest. Nemechek’s dominance this year further cements his worthiness to drive a second entry for 23XI Racing.

Even before his dominance this year in the Truck Series, Nemechek already belonged in the Cup Series. He amassed six Truck Series wins, including two top 10 finishes in the championship standings, driving for his family-owned team.

In 51 NASCAR Xfinity Series starts prior to this year, he won one race and scored 12 top fives and 30 top 10s. He finished seventh in the 2019 championship standings driving for GMS Racing, which then promptly ended its Xfinity Series program afterward. Nemechek’s success in both lower NASCAR national series showed his readiness to compete in the Cup Series. He is ready to drive for 23XI.

Last year, Nemechek graduated to the Cup Series to pilot the No. 38 Front Row Motorsports Ford. In a unique year, he finished inside the top 10 three times and bested current Cup Series drivers Ryan Preece, Corey LaJoie, Daniel Suarez, and Quin Houff in the championship standings.

Without practice or qualifying sessions, Nemechek finished an impressive ninth place at Darlington Raceway in the first race after the sport’s COVID-19 hiatus. He then scored top 10s in both races at Talladega Superspeedway, surviving at a track notorious for multi-car wrecks. 2020 was a challenging year to be a NASCAR rookie, but Nemechek continually learned and cemented his status as a capable Cup Series driver.

After Nemechek departed Front Row for KBM, Front Row hired Anthony Alfredo as his replacement. While Alfredo didn’t have as much experience as Nemechek entering his rookie Cup Series season, he has paled in comparison to Nemechek’s rookie year. Alfredo is 30th in the championship standings, third-worst of all the full-time drivers. He is already more than 200 points below the playoff cut line with still 10 races left to go in the regular season. He has finished on the lead lap only five out of the 16 races thus far. Moreover, bad luck isn’t necessarily a defense for Alfredo as he only has three DNFs.

Current 23XI driver Bubba Wallace is 21st in the championship standings, alongside Ross Chastain in his first year with Chip Ganassi Racing and Trackhouse Racing’s driver Suarez. The No. 23 is fully funded, and team owners Denny Hamlin and Michael Jordan have their sights set on expanding to a second entry.

With the arrival of the Next Gen and the likely desire to acquire a charter, the second entry will need some funding. Nemechek brought some funding to KBM, and his funding would hasten the competitiveness of that second entry.

If Nemechek wins the Truck Series title, it’d be hard to not elevate him back to the Cup Series. – Mark Kristl

When adding another driver to a team, here’s the question that should be asked: “Does this make our race team better?”

In the case of 23XI possibly adding Nemechek, the answer is no.

That’s not a slight on Nemechek. He has shown talent this year in top-caliber equipment at KBM. But there’s a huge difference between one of the top teams in a series and a team that, quite frankly, is second-rate, at best.

There’s no crueler teacher than experience in racing. 23XI is already taking baby steps in one driver, Wallace, who is still in the early part of his racing career. There are places to gain experience as a driver. And the law of inexperience teaches us this – get ready for torn-up racecars, no matter how good a driver is.

The greats of the sport have not been immune to either avoiding wrecking cars or taking care of equipment. In Jeff Gordon’s first season, he either crashed out of a race or retired early due to engine problems in nearly a quarter of his starts that season. Other young drivers in subpar equipment have put up similar numbers.

Rookie lumps will happen, and some teams can absorb them. The Stewart-Haas and Joe Gibbs Racing-type teams can. 23XI Racing? Not yet.

The fact is for a team to grow, a veteran driver is needed.

A cautionary tale exists in the case of at least one team – Chip Ganassi Racing.

From 2003 to 2005 with the combo of Jamie McMurray, Casey Mears and Sterling Marlin, at least one CGR driver finished in the top 15 of the points standings, and this came a season after Marlin was a heavy favorite to win a title before an injury cut things short. After 2004, the organization decided to part with Marlin and a mixture of drivers such as David Stremme, Reed Sorenson and Casey Mears were hired. They were drivers short on NASCAR experience and it showed as Ganassi had just two top-15 points finish from 2005 to 2008.

If you have a young driver pairing them with a veteran proven driver is critical to helping guide both that younger driver and new team members. If Wallace was a consistent winner of at least a race or two a year, it’d be plausible for Nemechek to be tapped as 23XI Racing’s newest driver.

23XI Racing is not at that point yet. It can’t afford to stunt the team’s growth right now, which is why for the time being, it should go more toward a veteran rather than a driver like John Hunter Nemechek. – Brad Harrison

Why would JH even consider driving for that team should be the question.

There you are, whining again! “That team” is essentially a part of JGR, one of the top two franchises in NASCAR. JHN drives for KBM which also puts him in the same franchise. The only problem Toyota has is the few Cup level teams for the talent they develop at KBM and JGR/NXS.

Actually, I hope the second car goes to Kurt Busch as he would be a proven veteran addition who could win immediately, much like the current flavor of the month, Kyle Larson.

Anyone to beat HMS and take the Fat Felon and Short Fat Former Driver down a peg would be great.

Whining about what, I made a flat out statement of my opinion
JH took a step back to drive great equipment and win. He’s doing that. Why jump right back into the same situation he was in before. Seems to me Gibbs satellite teams don’t get the exact same stuff his teams do. Think about it, he would be pretty foolish if he shared everything with a team that only paid him a percentage of what he’s spending on his teams.

The team should keep Bubba. It is a great combination of people for NA$CAR. The 23XI car is more than about results in a race. It is an example of diversity which is a goal in racing.

If the main purpose isn’t to get results in the race, then something is wrong with the team and the sport.

Nascar is one of, if not the only sport, that is not purely results driven.

The main purpose of any professional sport is to make money. Sponsorship starts at the lower levels of all sports and the athletes who get it are generally the only ones who have a chance to perform at the higher levels.

No kidding. The goal is winning, not diversity. You shouldn’t get a ride simply to satisfy a diversity goal. Bunch of clowns.

I think the “echo” is inside your head.

I think you should stick to bingo with your megaphone. Bet all the other ol ladies would love you. Poor jo. lol

Or is “echo” some reference to military background? If so, you must have been a real disgrace to the uniform.

lol, I’d love to play poker with you.

Affirmative action. Mmmm. Nah, you live with it. I’ll cheer for real racers, not those who didn’t race their way in. Bet I enjoy the races more.

Of course your point is correct, but it’s a new society, has been for years, perception over facts.

Diversity. Larson and bubba. I’m enjoying cheering for the one who raced his way to where he is.

He makes you proud to be a racist, doesn’t he? You probably use that word all the time!

Nasaman
Reply to  Tom B

Diversity doesn’t win races. It didn’t at RPM and won’t at 23XI…Frankly Wallace needs to learn to race and he might win a race…
Nasaman

Dump no win Wallace and get Kurt Busch and joe hunter menechek for your 2car team and jordon and hamlin will be smiling there ass off with wins all though Denny not so much. Wallace might fit back in the truck series they need diversity there also.