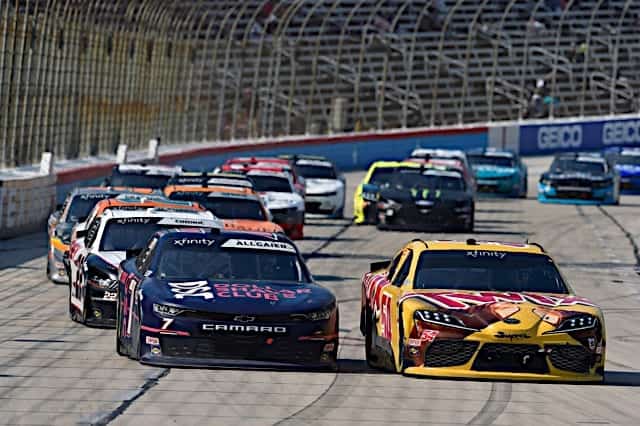 The good news for those wary of Kyle Busch going for wins in the NASCAR Xfinity Series?

He is only scheduled to race in three more NXS races this year.

The next one is this weekend at Nashville Superspeedway, one week after getting win No. 99 in the series.

We’re very close to seeing how serious Busch is when it comes to making guarantees – or if he’ll find a loophole.

The reaction across the social media space may suggest otherwise, but Busch’s next win should not mean the end of his Xfinity career. NASCAR rightly placed limits on how frequently Cup drivers can take part in lower-series races, a move intended to prevent scenarios such as Brad Keselowski winning a title in the No. 2 series while also driving in the NASCAR Cup Series.

Cup drivers racing in what began as the Budweiser Late Model Sportsman Series hardly began with Busch. In that first season, the winner of the inaugural race was a Winston Cup champion as Dale Earnhardt won twice within the season’s first eight races. As time went by, Jack Roush’s entries driven by Mark Martin, Jeff Burton and Carl Edwards, as well as others put together a string of dominance.

Today, due to Busch being a lightning rod of controversy and the ability to hide behind screen names of social media, there’s a huge outcry anytime he enters a lower-series race. The angst over Busch running Xfinity races has nothing to do with the actual running of those races. Look no further than the tame reaction when a driver such as Chase Elliott enters a NASCAR Camping World Truck Series race.

If Busch was walking over the field each time he entered, it’d be one thing, but he’s not.

The excitement and intrigue of Busch running Xfinity races isn’t that he continues to win. It’s what he overcomes to do so. If he had by far the best car anytime he enters, that’d be one thing, but it’s not.

You need to look no further than last week as a trademark example at Texas Motor Speedway.

In that race, Busch was good, but as things developed, Justin Allgaier appeared to have the car to beat, even on restarts in the final stage. It wasn’t what had been seen in past occasions, where Busch nailed a restart and easily pulled away due to driving ability and JGR horsepower. Allgaier matched Busch, even holding the upper hand on two restarts before Busch gained the late advantage when it mattered the most.

The fact that Busch conceded after the race on Saturday that Allgaier was as good as he was on restarts speaks volumes about how hard it is for a driver to come from the back, even if they are as talented as Busch.

“I was just able to think through a few things there on a couple of restarts that may or may not work but there at the end they did,” Busch said.

When a series regular goes toe-to-toe with a Cup superstar, it’s great for the sport. Take the Ross Chastain vs. Kevin Harvick spat in 2018, for example. An up-and-coming driver feuding with a NASCAR champion not only stoked the embers of excitement, but it also arguably helped Chastain move toward being a full-time Cup driver. If not for that arena to show how good he really is, it can be argued that Chastain would not have gotten the opportunity he now has with Chip Ganassi.

The truth from the past remains the same.

A driver like Busch being on the track is a win-win. Seeing what the next way he’ll try to snag a win is something to behold, and when a driver beats him, it’s worth cherishing.

“This Xfinity Series right now, it’s such a blast,” Allgaier said. “We have so many great competitors.”

Busch is absolutely one of them, and fans able to see a race in person in the Xfinity Series witness greatness is Busch is behind the wheel.

For that reason, we should still get to see Busch in the Xfinity Series.

What To Watch For This Week…

Unfair advantage? Most drivers heading into this weekend don’t have the luxury of having raced at Nashville Superspeedway. Allgaier and Busch, however, are the exception with seven top-five finishes between them at Nashville with others with NSS experience including J.J. Yeley, Michael Annett, Timmy Hill, and Jeremy Clements.

Given the way they performed last week, Allgaier and Busch roll into Music City with plenty of momentum, and it’d be smart to expect both to be strong contenders for a win.

Champion without a win? It’d fly in the face of NASCAR’s emphasis on winning, but multiple drivers are trying to do the opposite of what NASCAR’s current championship format intends – win a title without winning a race.

Harrison Burton won twice in the final three races to close out last year, and Daniel Hemric is still seeking his first win in a NASCAR national series. That’s anything but disappointing, as both have been in a position to win multiple times, and both are within the top four of the points standings.

As the past has shown, winning multiple races over the course of a year is not an automatic qualifier to be a champion – running the best as a season ends is. It’s exactly why there’s no such thing as a championship favorite until we get through the summer months.

If you put Kyle Busch in an ‘underdog’ car, then it would be fun to see what he can do with it on the track. Having him on one of the best cars in the field just makes for a ho hum day until he gets the checkers. I don’t even bother to watch the Xfinity races when he is driving. Why bother?

When the Cup drivers are in the ‘underdog’ cars in Truck or Xfinity, they are not using the regular crews for those teams. They are using their regular Cup crews. It does make it unfair.

If you actually watched the race last Saturday, you’d know it was anything but “ho-hum.’ Try it sometime!

Didn’t a bunch of cup drivers(KB & MM) win in the Dollar General Braun Xfinity car? Wasn’t that an underdog car?

Last weekend’s NXS race was by far the best of the weekend, far outshining the two circus events, SRX and the All Star Race. Kyle Busch and Justin Allgaier were evenly matched and it wasn’t until late in the race that Busch figured out what he needed on the restarts with the traction compound.

But of course, the fans like Sally and Jill, who didn’t even watch the race, are the complaining about Rowdy being part of it. The anti-Busch obsession is laughable, but it actually increases fan interest, so keep it going!

Other drivers have won in the 54 so they are just as good as Baby Busch.

The difference is Kyle wins when the #54 is not the best car.

Only one car can win and it’s the 54 no matter who is driving. Maybe the other drivers aren’t as good as the drivers in the 54 and make more mistakes.

I guess it must be comforting to delude yourself that way. LOL!

I am as comfortably deluded as you.

Not accepting Kyle Busch is one of the most talented drivers in NASCAR history is completely delusional.