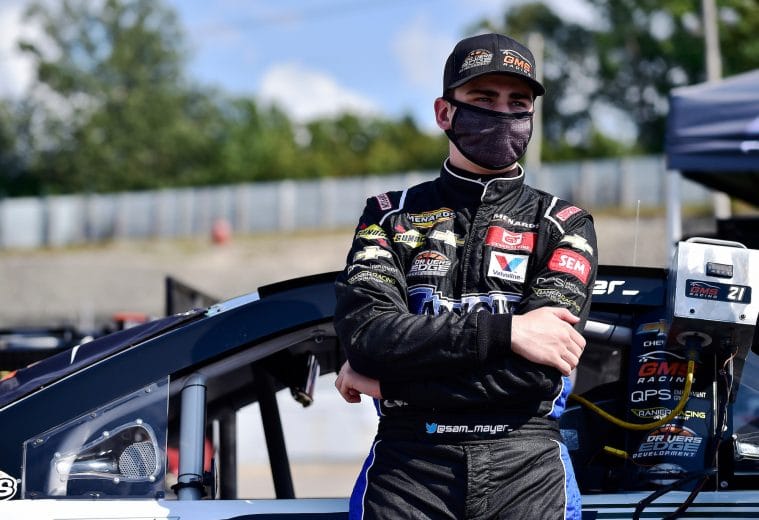 In just over a week, another prodigy driver makes his long-awaited NASCAR Xfinity Series debut.

On June 26, Sam Mayer turns 18 years old. The next day, he’ll be hauling the JR Motorsports No. 8 Chevrolet into the treacherous corners of Pocono Raceway.

“Oh, getting to turn 18 is one of the coolest things you can do,” Mayer tells Frontstretch. “Especially when you’re hopping in an Xfinity car the next day. It’s gonna be a heck of a weekend because we got the ARCA [Menards Series] race on Friday. I turn 18 on Saturday, and then we race on Sunday. So it’s gonna be a full weekend for me.”

The only thing Mayer has planned for his birthday is, “Hopefully two big wins.

“Outside of that, no. It’s just another weekend for me going racing and hopefully, obviously, coming home with some birthday gifts and wins,” Mayer says.

Mayer, the son of former NTT IndyCar Series and sports car racer Scott Mayer, has raced since he started driving go-karts at 4 years old. After deciding to take the NASCAR route instead, Mayer got hooked up with Lorin Ranier, son of former NASCAR Cup Series owner Harry Ranier.

“He kind of formed me into what I am today, because he put us with a bunch of good teams,” Mayer says.

Mayer then transitioned to racing Legends cars at Charlotte Motor Speedway at 11 years old. Success in those cars soon led to him getting with JRM’s late model and Chevy’s Drivers Edge Development programs, and that’s where his career really started to take off.

Mayer has taken each NASCAR touring division he’s entered by storm. He won five of his 13 ARCA starts last year, and he has nine wins and two championships in the past two seasons of ARCA Menards Series East. He won at Bristol Motor Speedway in just his seventh Camping World Truck Series start, coming at the ripe age of 17.

But this year, Mayer’s meteoric rise had to take a brief hiatus.

The Wisconsin native signed to drive for JRM in Xfinity, but NASCAR doesn’t allow drivers under 18 to race in its top two series. That meant Mayer had to miss the first 15 races of the season while JRM late model phenom Josh Berry and road course specialist Miguel Paludo kept his seat warm. He has at least gotten to race in three Truck races, one for Henderson Motorsports and two for Bret Holmes Racing.

“I mean, it sucks,” Mayer says. “I wish I was in the car at the beginning the year, running full time, running all these races and stuff. Because obviously I want to go out and win, and I feel like I can in my first couple starts.”

Thanks to Mayer being on the sidelines and starting in Xfinity as soon as he turns 18, there will be four major obstacles for Mayer to overcome when his tenure in the No. 8 begins.

Berry won at Martinsville Speedway and has three top fives and five top 10s in his 11 JRM starts so far. The Martinsville win especially made Berry a sort of folk hero for short track racers everywhere, and now, some want JRM to keep Berry in the car instead of letting Mayer take over.

“I already see it on social media,” Mayer says. “But a lot of people really don’t understand kind of the business aspect of racing. And obviously they’re blinded by how good and talented of a driver Josh is.

“And that’s why we decided to give him the opportunity, because JRM didn’t want to have the No. 8 car only run the second half of the season. That wouldn’t be a smart business model, financially and everything like that. So we wanted someone to get in the car [the first half of the season], and we talked to a number of different drivers to make us look good, because they were all talented. And then we thought, ‘Oh my gosh, Josh needs that opportunity. He’s good enough to have it, and if we can find the funding and JRM can help out a bunch, it can work out.'”

Berry has been with JRM since he started driving the team’s late models in 2010. There, he has mentored a number of developmental drivers, including Mayer, William Byron and Anthony Alfredo.

“I’m grateful that he’s gotten the opportunity to do that, because he’s been so good to me over the last couple years, like when I ran late models with him back in 2018,” Mayer says. “He helped me a bunch with my career, and obviously being able to repay the favor and have this whole business deal work out really well for both of us.

“… and almost borderline a little too well, because people fell in love with him so much. But honestly, that’s a good thing. Because we want him to run really well each week and hopefully get an Xfinity deal next year, too. I mean, that would be huge.”

Ty Gibbs, another 18-year-old prodigy, has scored two wins and six top fives in seven Xfinity starts this season. That kind of instant success raises the bar for what Mayer needs to do right out of the gate, especially considering his budding rivalry with Gibbs that goes back to ARCA East.

Does that increase the pressure on him? “Maybe a little bit,” Mayer says. “I’m not too worried about comparisons between another driver, but I definitely want to go out and beat him. Because the last two years I’ve done just that. I’m two-for-two so far, I guess, championship-wise.”

Last season, Gibbs finished second to Mayer in the ARCA East championship. Gibbs won one race, while Mayer won the other five.

“I want to go out and win more championships against him, win races against him,” he says. “But he’s a wheel of driver. I mean, going on to win your first start on a road course and everything, too, is huge.

“Obviously that puts pressure on my back to go and perform, too, but I’m not so worried about comparisons. I’m just gonna let the wins fall in my favor and come to me. But, I mean, I’m definitely jealous that he’s gotten to run so far this year, and I haven’t gotten the chance to prove myself.

It doesn’t seem that Berry will get a playoff waiver if he picks up a ride for the rest of the season, despite the Martinsville win, as he has missed two races. However, nothing has been said yet as to whether or not Mayer would get a waiver should he win a race and get into the top 20 in points.

In fact, the precedent has been set so that a driver who misses races because of age restrictions can get a playoff waiver should they finish out the season without missing a race. Tyler Ankrum was granted a waiver in Trucks in 2019 after missing the first three races of the season because he hadn’t yet turned 18.

Mayer will have missed 15 races at that point compared to Ankrum’s three, so who knows if he gets the waiver or not.

“If I go out and win Pocono or Road America, I sure as heck hope [I get a waiver],” Mayer says. “Because going and winning the championship in your first season when you’re 18 and like five months old? That would be insane.

“But I think with NASCAR rules, I think you have to attempt every race. So unfortunately, I don’t think I will. But NASCAR is full of surprises. And I like to think I am, too. So if I go out and win, I guess we’re gonna have to talk about that eventually.”

See also
NASCAR Mailbox: Should a Part-Time Driver Be Able To Make the Playoffs?

Mayer is eligible to compete for Rookie of the Year, and if he were to qualify for the playoffs, he would automatically win the award over mentor Berry and rival Gibbs. Mayer says that he thinks a driver in his situation should get a waiver.

“I honestly think so,” he says. “I mean, obviously NASCAR, it’s always up to them. But any chance that I can go out and run for a championship and have the capabilities of doing it? Obviously I’m going to take that. … I think if we’re running for Rookie of the Year, we might as well go for the whole championship.”

If NASCAR did agree to grant Mayer a playoff waiver, he would need a one-off ride in the penultimate regular season race at Richmond Raceway, as boss Dale Earnhardt Jr. will drive the No. 8 in that race.

Like Mayer, Kyle Busch and Joey Logano both got into Xfinity as soon as they turned 18. That’s great company to be in, as both have since gone on to be NASCAR Cup Series champions. However, those are also two of the drivers who get the most boos at driver intros.

Both Busch and Logano have been hated by a large portion of fans essentially ever since they came onto the scene as teenagers. Chase Elliott entered Xfinity at 18 as well, but most fans weren’t going to hate Awesome Bill‘s son.

However, should Mayer have the type of instant success that Drivers Edge and many others believe he will have, there’s the potential he could have the same fate as Busch and Logano.

“Love always overcomes hate,” Mayer says. “So I guess there’s that, but I mean, if you look at it, all the best drivers and all the ones that win always get booed because they’re the ones performing the best. And people always love the underdog, but they don’t always like the actual winner.

“But obviously, Kyle Busch, he knows how to get it done as well. But he does not always know how to say the right things.”

So the stage is set for Mayer’s highly anticipated debut. Will he overcome those four obstacles and be the star Chevy wants him to be? Only time will tell.

Best comparison for Sam Mayer is not Ty Gibbs or Josh Berry. It’s Chandler Smith. Three to five years from now they’ll both be superstars at the Cup level.