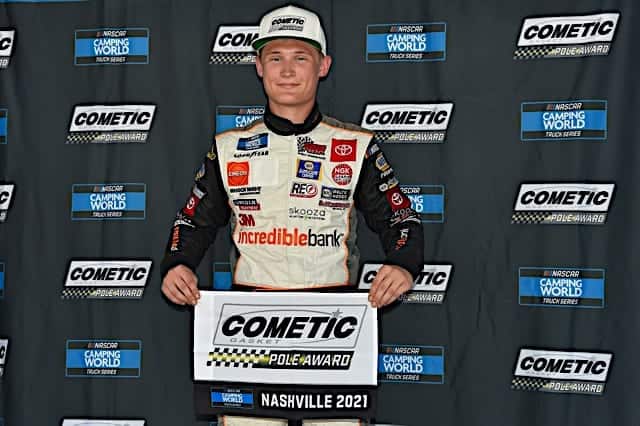 For the first time since 2011, the NASCAR Camping World Truck Series took to the concrete 1.33-mile circuit of Nashville Superspeedway for its session of one-shot qualifying on Friday evening, June 18.

He jumps to the top of the board in #CometicGasket Qualifying. pic.twitter.com/FrBHPfHdnr

While winning the pole certainly doesn’t guarantee a race win, it’s worth mentioning that the last four Truck Series events at the venue have ended with the polesitter going to victory lane.

The Kyle Busch Motorsports driver slowed in turns 3 and 4 while approaching the start-finish line and turned around on the tri-oval. After doing so, the 24-year-old drove backwards around the speedway and restarted his out-lap.

However, it was announced shortly after that the No. 4 Toyota’s time was disallowed and the team will have to start at the rear of the field. According to FOX Sports’ Bob Pockrass, he violated Rule 9.5.F: .f “Unless otherwise determined by the Series Managing Director, drivers who encounter a problem during Qualifying will not be permitted to travel counter Race direction.”

Todd Gilliland’s and Tanner Gray’s teams were working on their trucks and they didn’t make it out on track during the session. They need to pass tech inspection in order to start at the rear tonight.

Tonight’s Rackley Roofing 200 at Nashville Superspeedway will be live on FS1 at 8 p.m. ET.