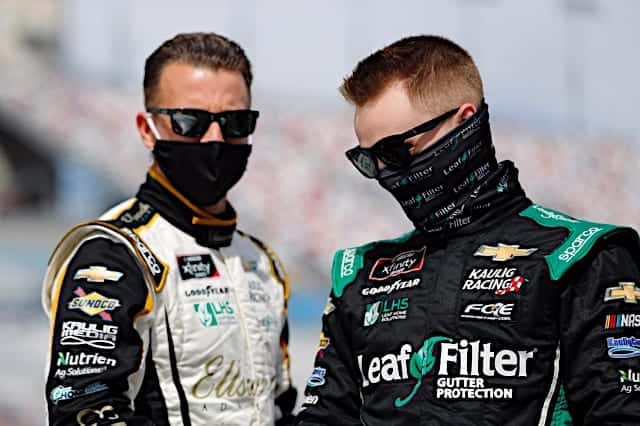 The first Rookie of the Year candidate for the 2022 NASCAR Cup Series has been announced: Justin Haley. He will drive full-time next year for Kaulig Racing, which announced Friday (June 18) that it has acquired two charters from Spire Motorsports for the upcoming Cup Series season.

Haley has signed a multi-year deal to pilot the Kaulig No. 16 Chevrolet full-time in the Cup Series.

“I’m extremely proud of how far Kaulig Racing has come in just a few short years,” team owner Matt Kaulig said in a team statement. “We entered our first Daytona 500 in 2020 and have already made it known in just a handful of races that we are there to compete. It’s been no secret that going full-time racing in the NASCAR Cup Series was our goal at Kaulig Racing, and that is exactly what we are doing by purchasing two charters for 2022 and having Justin Haley as our first, full-time driver!”

Spire said in a statement it would continue to run the chartered No. 7 with Corey LaJoie next year.

With the sale of two of its three charters, Spire leaves Trackhouse Racing, which is in the midst of its first time full Cup Series season, without a charter for next season, a decision surprising team co-owner Justin Marks.

I learned about this deal when everyone else did today https://t.co/FRX8W314SN

Haley has already made 17 career Cup Series starts in addition to three straight Xfinity seasons with the team.

He won his first Cup race in the 18th race of the season at Daytona International Speedway.

“It’s been my dream from the start to race full-time in the NASCAR Cup Series, and to do so with everyone at Kaulig Racing just feels right,” Haley said in the team release. “This is an opportunity of a lifetime for me, and I couldn’t be more thankful for the endless support from Matt Kaulig and Chris Rice. This team has done more for me than I could ever do for them. I’m so honored to stay in the Kaulig Racing family for years to come.”

Kaulig has made five Cup Series starts thus far with one top five and three top 10 finishes. It debuted with Haley in the 2020 Daytona 500. Allmendinger scored the team’s best finish of fifth place in the inaugural race this year at Circuit of the Americas.

In the Xfinity Series, Haley has three wins and finished third in the championship standings last year.

Allmendinger joined Kaulig full-time this year after running part-time for the team previously. He has scored two wins this year and is currently second in the point standings.

Allmendinger has won seven times in his Xfinity career, with 19 top five finishes and 22 top 10s.

He’s also earned one top five and two top 10s in Cup so far this season.

In addition to Allmendinger, Kaulig confirmed it will run at least two full-time Xfinity Series entries next year, though it ideally wants to field three.

Team President Matt Kaulig said the team plans for Kaz Grala to remain a part of the organization, though his role for next year is yet to be determined.

Incredibly excited for @MattKaulig and @C_Rice1 on their growth for next season. Name a more fun driver lineup than @Justin_Haley_ and @AJDinger. ?

I fully believe in what @KauligRacing has built, and will be working very hard to put the necessary pieces together to join them!

Furthermore, Kaulig will continue its alliance with Richard Childress Racing as the Cup Series ushers in the NextGen car next year.