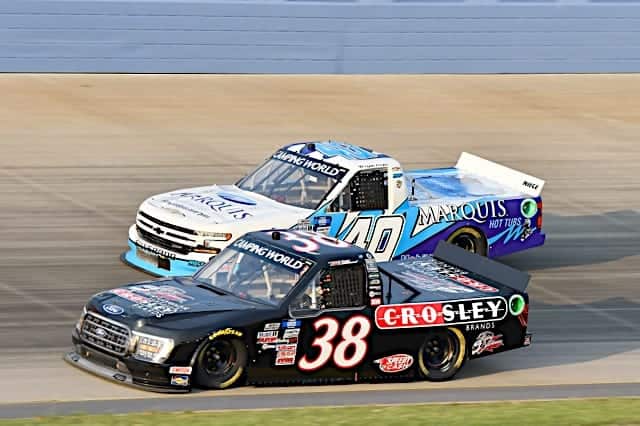 Todd Gilliland is currently in the midst of a career-best year in the NASCAR Camping World Truck Series. His only finish outside the top 20 was a 31st-place finish in the season opener at Daytona International Speedway. Specifically, he has now finished inside the top 10 in four straight races, a streak that began with the series’ inaugural trip to Circuit of the Americas.

Friday night (June 18), as the series returned to Nashville Superspeedway for the first time since 2011, Gilliland drove from the rear of the field to finishing second to first-time winner Ryan Preece, missing out on his third career victory.

At the end of stage one, Todd Gilliland drove his way up to 19th place, failing to earn any stage points but progressively driving through the field.

When the caution flag flew on lap 77, Front Row opted to bring Gilliland down pit road. While the team adjusted his No. 38, he was penalized for a commitment line violation. For the second time in the Rackley Roofing 200, Gilliland was sent to the tail end of the field.

Undaunted, Gilliland again marched through the field. He found himself in third place in the closing laps, battling Preece for second place at the time. He got too loose racing underneath Preece, who took the lead away from Grant Enfinger. Gilliland then passed Enfinger to finish runner-up at the 1.333-mile track.

Earning his fifth top five this season, one shy of tying his career-high, Gilliland climbed out of his truck unsatisfied with his finish.

“I think it’s just different circumstances when you luck into a second and you’re super happy with it but tonight, I actually feel like we definitely had the best truck here,” Gilliland told FS1 post-race. “It stings not to get that last spot cause I was under the No. 17 [Preece] at one point, just got too loose. That’s racing, that’s what they say, we’ll move on.”

This Sunday is Father’s Day and Gilliland was glad his father David Gilliland was involved in the top two finishers. Gilliland owns the race-winning No. 17 in addition to filling in as his son’s crew chief.

“A Ford one-two, that hasn’t been done in a while,” Todd Gilliland said post-race. “Super happy for my dad. He’s crew chiefing me tonight and then his truck ended up beating me. Overall, super happy with the progress we’ve made and can’t wait for the next one.”

Ultimately, driving to the front of the field twice in the Rackley Roofing 200 wasn’t ideal, but Gilliland pointed to his speed in his FRM Ford for his performance.

“We unloaded real quick. We were top of the board in race runs and we felt really excited about our truck for tonight. I think it just shows the fight. We never really lost focus on it. The low point obviously being cutting half the nose off it, rehanging it, and still being just as fast.”

There are three races remaining in the Truck Series regular season. Gilliland currently has one win and two stage wins, giving him seven playoff points. After finishing 10th, 11th, and 10th in the championship standings the past three seasons, respectively, Gilliland believes he is capable of making the Championship 4 this year.

A very excited Todd Gilliland on the progress his team has made this season and what it was like to have his dad call the shots for the suspended Chris Lawson. pic.twitter.com/EHokpmuc9N

Next up for the Truck Series is a trip to the Tricky Triangle. In three Truck Series starts at Pocono Raceway, Gilliland finished fourth last year and has three top-10 finishes. The Trucks will race in the CRC Brakleen 150 at 12 p.m., ET with TV coverage provided by FS1.