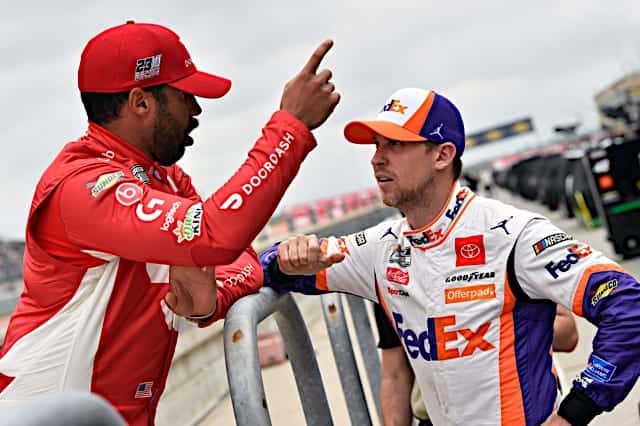 Kaulig, the owner of the NASCAR Xfinity Series team Kaulig Racing, announced he had purchased two charters from Spire Motorsports with the intent of fielding two full-time NASCAR Cup Series entries in 2022.

Linked to reports that he’s been offered an ownership stake in Roush Fenway Racing, Keselowski isn’t (officially) someone who would have interest in a charter. But he told reporters Saturday he’s “certainly paying attention, no doubt, a lot of attention” to the market.

Two people who are certainly in the market for a charter in the 2022 season are Justin Marks and Denny Hamlin, the respective co-owners of Trackhouse Racing and 23XI Racing.

An extra emphasis is on Marks, whose team leases one of the Spire charters Kaulig bought to field Daniel Suarez’s No. 99 Chevrolet.

Regardless of whether Trackhouse secures any charters for the 2022 season, Marks said his freshman team will “100%” compete next year.

“We’re gonna race no matter what,” Marks said during a press conference Saturday. “The charter journey has been that, it’s been a journey. It’s an interesting time in the history of the sport with this charter economy. We’re working very hard every day to secure our future. And I feel confident about our future.

“There’s nobody here that knows everything that’s happening all the time. And there’s a lot of things happening behind the scenes. … Two (charters) came off the board yesterday. But there’s still a lot out there. So I’m confident we’re gonna get something done.

Yesterday, Justin Marks said ⁦@TeamTrackhouse⁩ would race in 2022 with or without a charter.

Asked ⁦@Daniel_SuarezG⁩ about it. Said he “trusts” Mark.”

“Unfortunately, you can’t go to Wal Mart to buy a charter.”#NASCAR #Ally400 pic.twitter.com/Whk8rG5sFi

Hamlin and 23XI Racing have been open about their desire to expand to a two-car operation, building on its effort with Bubba Wallace. Hamlin, who said the team “had initial conversations with Spire, but it didn’t really go too far,” explained the sport is in “a little bit of a bubble” when it comes to the charter market.

“There are many people with their hand on the panic button,” Hamlin said Saturday, “but theirs is much closer than mine is to it.”

That’s not to say 23XI must have a charter before a second team is an option.

“I think if I put all of the pieces together before the charter – and they all come together nicely, then I don’t think that I absolutely, positively have to have one,” Hamlin said. “A lot depends on what we see the charter future going … The model still requires you to put significant sponsor dollars on the car if you want to compete. If you just want to ride around, then that’s a whole different business model. If you want to compete, it still requires you to get eight-figure plus, plus, plus sponsor money in order to compete with the guys that have businesses that can put their thumb on you at any time.”

Hamlin admitted the team had “initial” conversations but hadn’t made a bid on any charter yet.

As 23XI Racing weighs “all of the options” in front of it, Hamlin noted a lot is dictated by the current charter agreement ending in 2024.

“We have to make sure we are making a sound investment for the next three years, because we cannot predict what happens beyond that, whether it gets renewed or the model changes or if they shift money around from the middle to the bottom or the top, who knows,” Hamlin said. “I’ve spent a decent amount of time in this sport making a decent amount of money. I don’t want to piss it all away right away.”

Oh please Denny, piss it away.