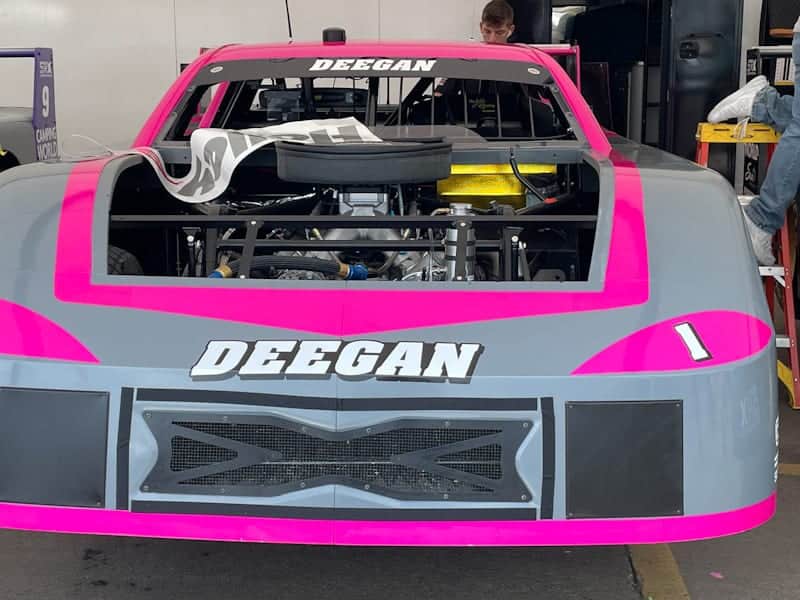 Of the three dirt ringers to show up at Knoxville Raceway on Saturday night (June 19) for the second ever SRX race, Hailie Deegan had the best showing.

The Camping World Truck Series regular not only bested dirt racers Scott Bloomquist and Brian Brown. But Deegan ran neck-and-neck with eventual winner Tony Stewart, who was noted as having more dirt experience than any other driver in the field, en route to a second-place finish.

“Honestly, that was so much fun,” Deegan told CBS. “My goal coming into this race was to prove to everyone that I deserve to be here, and I feel like we did that tonight.

“Running second to Tony Stewart, that’s a huge accomplishment for me.”

Deegan fighting Stewart hard up front for the lead @SRXracing when caution came out. Would be huge for her confidence.

She hasn't led a #NASCAR lap this season as a rookie in the Truck Series. #CampingWorldSRX

Deegan ran near the front the entire race. After finishing the first heat in third, a field inversion sent her back to 10th. In no time, the 19-year-old worked her way through the field, finishing the second heat in fifth.

Tony Stewart is already in fifth place, Deegan is in seventh.#SRX #CampingWorldSRX

After a thrilling battle with Stewart and Michael Waltrip in the feature, Deegan dropped to fourth on the final restart.

Going to be cool to race against @HailieDeegan tonight. I usually just talk about her racing. ? pic.twitter.com/C5HFZudham

But in the closing laps, she worked her way around Helio Castroneves for third before setting sights on Ernie Francis Jr. in second place. On the final lap, Deegan passed Francis to take the runner-up finish.

“I feel like we just ran a clean race,” Deegan said. “We just wrapped the bottom, and I stayed consistent, ran my line and finished second.”

The result came one night after finishing 21st in the Truck race at Nashville Superspeedway. CBS’ broadcast discussed how Deegan had to hussle through the airport to even make it to the track in time after her flight was delayed a little.

Deegan, the 2016 Lucas Oil Off Road Driver of the Year, noted that she was impressed with how well the SRX cars raced on the dirt of Knoxville.

“These cars are so much fun,” Deegan said. “Ray Evernham [SRX cofounder] did a great job putting on this series, especially for a dirt race. It is difficult to put a dirt race on for stock cars, so he absolutely killed that.”

Deegan, who is splitting her SRX ride with Tony Kanaan, will be back in the series one more time this season: The July 10 race at Slinger Speedway.

Here we go again, not only is this airhead twit being heavily promoted, they also have know it all Insanica yapping.
Sorry Tony, I’m all done.

If you didn’t enjoy that racing and don’t understand how that podium is important to the sport then please go.

Totally stupid comment about Hallie , she is the real deal and if you had watched her race the last few years you would know that but obviously you just like to make uninformed comments .

“Belonging in SRX” is meaningless. It amazes me that people think this “celebrity racing” series is legitimate in any way. It’s nice for the fans at the tracks they are visiting, but overall the series is all for show and ego and won’t get a second season.

Considering the resumes of the other drivers in the series, I imagine there was scrutiny about a relative rookie with much less success taking the place of Kanaan in what is billed as “Superstar” Racing Experience.

At this point in her career, Deegan is probably more capable than the so-called “superstars,” who are mostly well past their prime.

Can’t argue that. She definitely has more upside left to her career than the others, the lone exception being Ernie Francis Jr.

I watched this week for the first time. It wasn’t terrible but I couldn’t escape the feeling of genericness. Don’t like the cars. They have some goofy rules (as does NASCAR). It was kind of cool seeing some drivers that were fish out of water on a dirt track and there to have fun but that also undermines any seriousness to the event. Kind of like when they have celebrities on Jeopardy and all the money goes to charity. It doesn’t have the same level of tension as a normal episode.

That’s a great comparison. SRX is exactly like Celebrity Jeopardy or a Celebrity golf tournament. Nice for the on-site spectators and the charities that benefit, but I wouldn’t waste an evening watching it.

I don’t make a point of watching Jeopardy on any night, but if I was looking through the channel line-up looking for something to watch and Jeopardy was the most interesting thing on, I wouldn’t not watch it just because it was a celebrity edition. Actually they are more fun for the viewer since the questions are easier and I can usually answer a lot of them correctly relative to a normal episode.

I always thought of Jeopardy as something to watch while I was preparing dinner or eating, not something I would go out of my way to watch. I haven’t watched it in years. But in general, I avoid watching any kind of competition that includes celebrities.

Sorry, but all drivers in NASCAR are celebrities. They have all worked their way up from local celebrities to a national forum. No one wants to watch me, Steven an Jobe race anything, ever (though it would be cool). There is a racing market to tap for dollars and I find it refreshing to see something a little different appealing to our interest.

I can agree that it lacks intensity of NASCAR’s seasonal points drama, but entertaining non-the-less. Kinda like the powder puff or old timers race at the local tracks. It can be an entertaining change of pace. Let it play out without whining please.

It doesn’t need to be on TV or get the press attention that it is getting.

I’m trying to decide if you’re just playing with folks to rile them up, or if you just really hate Tony and / or Evernham that much. lol

I thought they did a better job covering the race this week. Not perfect, but there was improvement. I still think replacing Danica with Ken Schrader would be an awesome move.

I was surprised how well Waltrip was running, and pleasantly surprised by the great showing made by Deegan and Francis Jr.

Paul Tracy was entertaining, but I’m not sure how far a “rivalry” can go in a six race series? lol

Hope they get Elliott’s car fixed. It’s a shame they can’t give the man a piece that will stay running.

I think they should’ve given the hometown driver a bit more air time, at least post race. I don’t recall hearing from him at all.

Is Labonte even racing? He gets so little air time I’m not sure if he’s even there? Kinda like I remember him in Cup, quiet. He’s not up front making noise, and not out back crashing, so he goes unnoticed somewhere in the middle.

I think it’s funny people are hung up on “Legitimate Racing Series”. What does than even mean? It’s been billed as primarily an entertainment event that’s fun for the drivers to compete with others from different racing disciplines. It’s not trying to replace nor put down any other existing series. It just is what it is.

Taken for what it is, I think it’s a good product. It’s entertainment, and only takes a couple hours of my day. It’s more entertaining than watching F1, unless you just really love the technical side of racing.