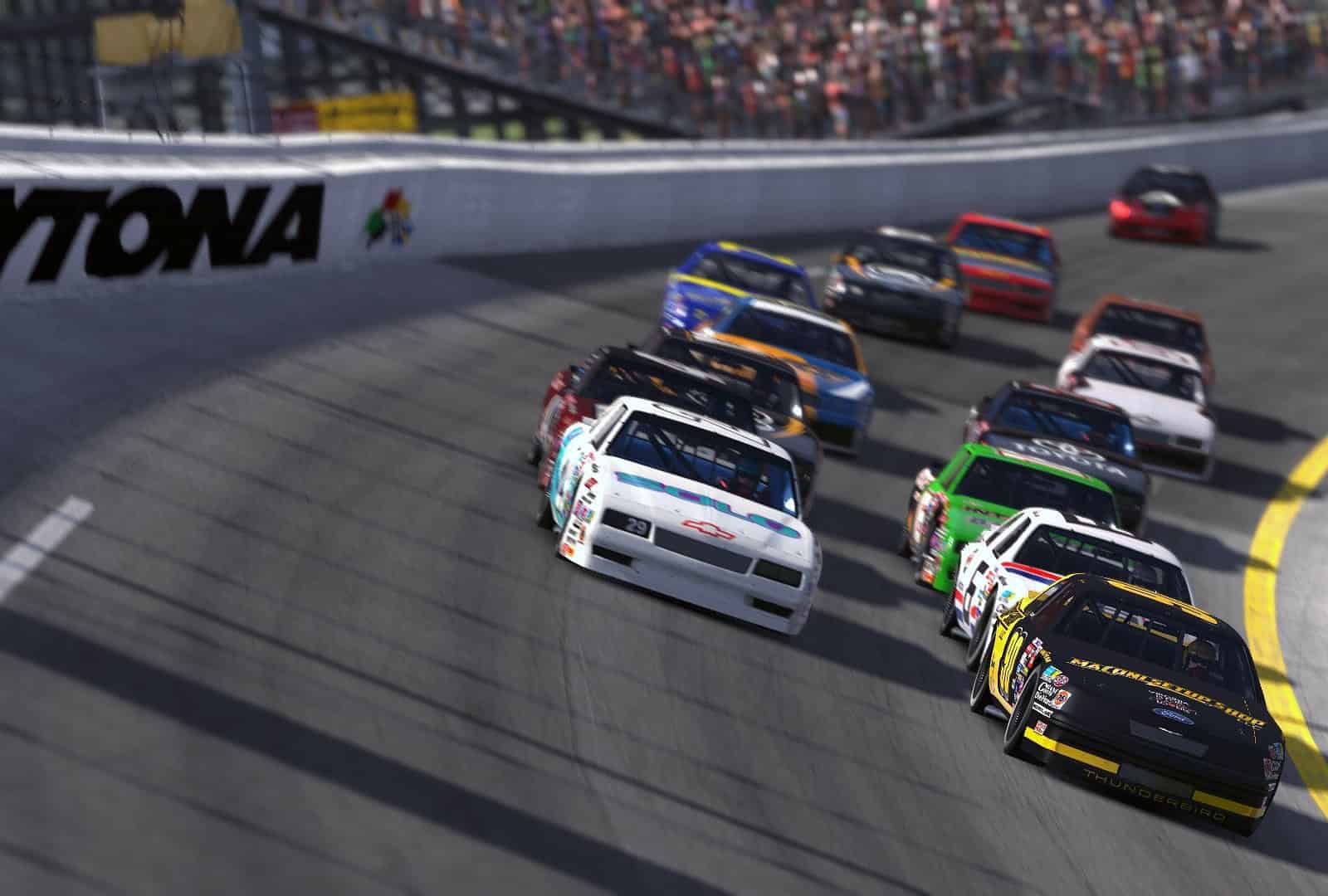 The new eNASCAR ladder system wrapped up its first rung last week, and after nearly 2000 drivers took their shot in the open series, 70 drivers have advanced from the first round of the iRacing Road to Pro Qualifying Series to the second round. Twenty of those drivers will move on from there to the Contender Series where they’ll face off against the bottom 20 relegated from the eNASCAR Coca-Cola iRacing Series to set the 2022 Coke roster.

Other than the official racing, 100% Cup went to Texas Motor Speedway for its All-Star Racing, FTF Racing hit up Charlotte Motor Speedway for the 600k, and Monday Night Racing went to Knoxville Raceway for another dirty experience in the Street Stock. Also, eRacr.gg kicked off their Firecracker 400 event with eight preliminary rounds to set their Top 88.

Just like the real thing, the 100% Cup Series brought reality to virtual reality with a full-length edition, All-Star Open and all, over to iRacing for its All-Star event.

After the Open sent a handful of drivers over to the main event, Jon Dulaney took the pole position. However, when the All-Star race concluded, the newest winner in the series, Robert Miller, secured the All-Star win.

Miller held off two of the titans of the series so far in 2021, Dulaney and Bryson Hixenbaugh, to take the feature win. Things will get back to normal with points paying races this week when the series heads to Nashville Superspeedway.

Check out the finish at:https://t.co/1xE6o69tPw

The second-longest race of the season after the 500 miles back in January, the Barr Visuals World 600k took the 2009 NASCAR Car of Tomorrow to America’s Home for Racing, iRacing virtual Charlotte Motor Speedway.

Four stages instead of the normal three split the race into three 50-lap segments with a 96 lap run to the checkers. Oumar Diallo took stage one with Kevin King winning stages two and three.

A caution in the final stage set things up for a fuel mileage showdown. Brian Mercurio and King were up front and battling hard for the lead, but Garrett Konrath was waiting in the wings, holding back as much gas as he possibly could. As cars dropped off the pace or through the pits, it was just King and Konrath taking the white.

King held the advantage through turn 3 but off of turn 4, almost Dale Earnhardt Jr in the Coca-Cola 600 in 2011 style, King held it low and slow and the Harvick in this scenario, Konrath took the checkered flag for his third win of the season.

What a finish! @kkingstyle runs out of gas out of Turn 4 and @GarrettKonrath9 takes his third win of the season, this time after 600 kilometers at Charlotte!

Only five cautions with a lot of green flag racing. Great show tonight, thanks for tuning in tonight on @BottomSplit! pic.twitter.com/tinOUxCqNb

With 10 races remaining until the playoffs, things are heating up for the transfer spot. FTF regulars Chris Wetz and Jake Poulin hold the final two spots by 22 and 20 points respectively, but Ryan Nawrocki, Cosmin Ioanesiu and Gary Watterworth are all within 25 points of the 15th place, and any of those positions could change at Nashville.

The Monday Night Racing league took to the dirt for the final time in season 3 for the Big Green Egg Dirt Derby at Knoxville Raceway. Scheduled for 85 laps in the main race preceded by a pair of heats to set the grid, the dirt event took off with 34 drivers vying for every inch of unturned clay.

TJ Majors led early on in the derby, but once again, SuperCars champion Shane van Gisbergen had something to say about it. The champ took control at lap 23 after working his way forward from the 13th starting spot and never looked back.

The fight was fierce in the middle of the pack. Many of the drivers were on top of one another and many incidents came from that, but towards the end, things filed out for a decent run to the checkers.

There was no post race recap with Michael Massie and Justin Melillo this week, nor will there be this upcoming week, but we both plan to get back to the week after that.

As far as the points shake out, four drivers have won in six races with van Gisbergen taking half of them. Nine spots still remain with four races to go and the points are getting tight between Devon Henry in 12th, Ford Martin in 13th, Melillo in 14th, Mark Rebilas in 15th, and DJ Cummings in 16th. Those drivers are separated by six points or less and only 13 drivers will make the playoffs.

OFFICIAL: Point Standings after @knoxvilleraces with Shane Van Gisbergen leading the way with THREE races to go until the #MNRplayoffs.@PodiumeSports | @iRacing pic.twitter.com/2gTKyvQo08

One of the biggest events of the year, the Firecracker 400 by eRacr.gg is back for its second go with the 1987 cars on iRacing at the old edition of Daytona International Speedway. Led by the duo of Landon Cassill and Parker Kligerman and managed by Joshua Mendoza, eRacr.gg manages to bring tons of drivers from all over the iRacing community to take part in their events.

430 drivers registered, but only 88 could advance onward to the second round. After two nights and eight preliminary races, the top 88 is set. Many big names in sim racing were able to win their prelim race or advance, but it was especially interesting to note that Dale Earnhardt Jr took the final prelim win on Wednesday night.

Big names like Ray Alfalla, Jimmy Mullis and more top level eNASCAR talent were all sent home packing. Kyle Busch tried his hand at the prelim round as well but just fell short by three spots to transfer. Something tells me, with the eRacr Provisional for the 400 still in play, that we may not have seen the last of Busch. He was the promoter’s provisional for eRacr’s last event, the Carnomaly 500.

The unofficial and properly spelled Top 88 for the 2021 Firecracker 400#Firecracker400 | @eRacr_gg pic.twitter.com/ci0K1XLkB0

Dover International Speedway set the stage for the final race in the first eight-race qualifying round for Road to Pro. Between nine splits and a little more than 100 drivers, the field would be set for the second round with just 70 drivers moving forward.

Some hopefuls made the cut and will be moving on, others will have to try again next year. There were some good surprises, but a lot of the top talent was expected from the list of names.

There was a drop factored into these final results, ultimately won by Brandon McKissic after it was all said and over. Winning a fifth split gave decent points, but way less than a win in a top split race. Some names on the list are in the sub 5000 iRating range, notably, Brad Wright, who has a 4867 iRating, won five times on the season and finished 10th overall.

Moving to the next round, these 70 drivers will be split into two equal splits and will race to be in the Top 20 in points by the end of the season.

100% Cup Series will run at the new Nashville Superspeedway on Saturday night at 8:30 p.m. ET. The replay will be available on 3 Wide TV.

FTF Racing will also be racing at Nashville on Sunday at its normal time, live at 8 p.m. ET on BottomSplit.

Monday Night Racing heads to Gateway in the Super Late Models this week. The broadcast will start at 8 p.m. ET on Podium eSports.

Finally, the eRacr.gg Blue Emu Firecracker 400 continues with qualifying on Wednesday and Thursday this week. Catch the action over on eRacr.gg.