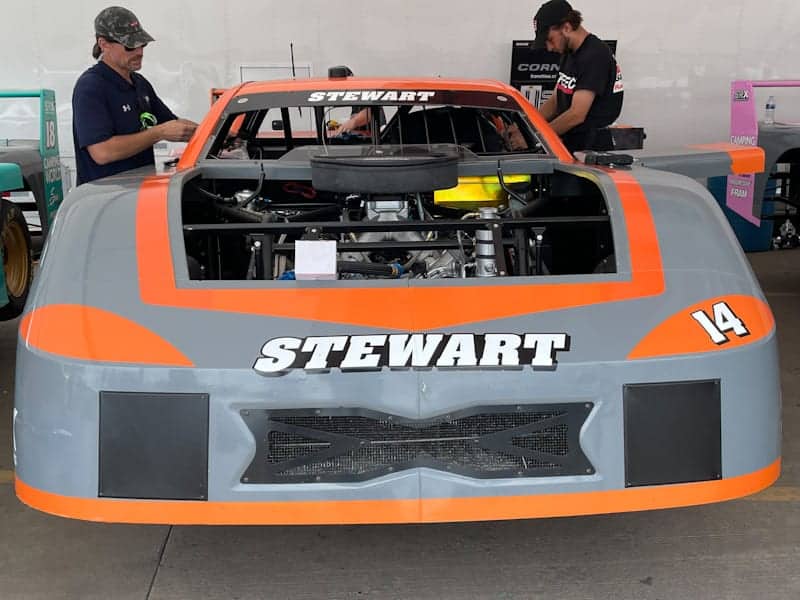 In the Camping World SRX Series’ first dirt track event on Saturday (June 19) night, series co-founder Tony Stewart won the first heat and led 43 of the 50 laps in the feature en route to the win at Knoxville Raceway.

“Hell, this is the first time I’ve been to victory lane at Knoxville,” Stewart told CBS in victory lane. “I’ve watched Donny Schatz, Steve Kinser and the greatest of the greats in sprint car racing. This is the place I’ve wanted to be so it’s pretty cool, for sure.”

“This is the sprint car capital of the world. Thanks to all the Knoxville staff… appreciate all the fans and everybody for letting us come here. We’ve been to two surfaces in two races and Ray Evernham built one hell of a fun race car to drive.”

“I think we saw that tonight; this place is challenging, it’s tough,” Stewart continued. “I thought, ‘If Michael Waltrip beats me, I’m gonna have to go to therapy if I get beat by him at dirt.'”

"It's the first time I've been in victory lane in Knoxville… This is the place I've always wanted to be, for sure, so this is pretty cool." – @TonyStewart after his win pic.twitter.com/d9SV9Bg8ZN

After she finished 21st in the Truck Series race at Nashville Superspeedway, Deegan climbed into an SRX car and impressively wheeled it to a runner-up finish.

“Honestly, that was so much fun,” Deegan told CBS post-race. “My goal coming into this race was to prove to everyone that I deserved to be here. I feel like we did that tonight, running second to Tony Stewart and that’s a huge accomplishment for me. These cars are so much fun, Ray Evernham did a great job of putting on this series, especially a dirt race. It is difficult to put on a dirt race for a stock car. He absolutely killed that. I feel like we ran a clean race, I wrapped the bottom, and I stayed consistent, ran my line, and finished second.”

23-year-old Francis Jr. finished third, but it wasn’t for a lack of effort.

“It wasn’t too bad for my second ever dirt race,” Francis Jr. told CBS post-race. “I was riding around there, trying to save my tires as much as I could. Car wasn’t as good in the feature as it was in the heat races. I was trying to keep the back end underneath me. Trying to save as much as I could, keep my position as I could. Had an awesome battle with Hailie Deegan out there. I was trying to get to the back of Tony Stewart’s bumper to get by him but I couldn’t. That was an awesome race. A little beat up but I cannot wait to get to the next one.”

The second-ever SRX race featured a few changes. The length of the heat races was lowered from 15 minutes to 12 minutes, and the feature length was decreased from 100 laps to 50 laps.

Less time didn’t equate to fewer emotions from the drivers. Specifically, Paul Tracy, who endured a rough night, finished last (12th) in the feature but also expressed frustration with Waltrip.

Says he's turned him two weeks in a row.#CampingWorldSRX

Waltrip on the other hand gave CBS an interview prior to the feature, then led a few laps during the feature.

"Big feet ain't for dancing and they ain't for these little cars." –@MW55
pic.twitter.com/ARfs6CL4tQ

When the checkered flag flew, it was 50-year-old Stewart who became the first series regular to win an SRX race.

The SRX drivers will compete on a dirt track for a second straight race next Saturday (June 26) at Eldora Speedway. Who owns that track? Tonight’s winner, Stewart. CBS will broadcast the event beginning at 8 p.m. ET.

This thing is a dumpster fire.

Wasn’t stroking Tony’s ego the only point to this fake series?

I think the race cars are good looking. There is a lot of work and money to make this a Series. But the races suck. It is hard to keep an interest watching. Having a so called rival between PT and MW will not help.