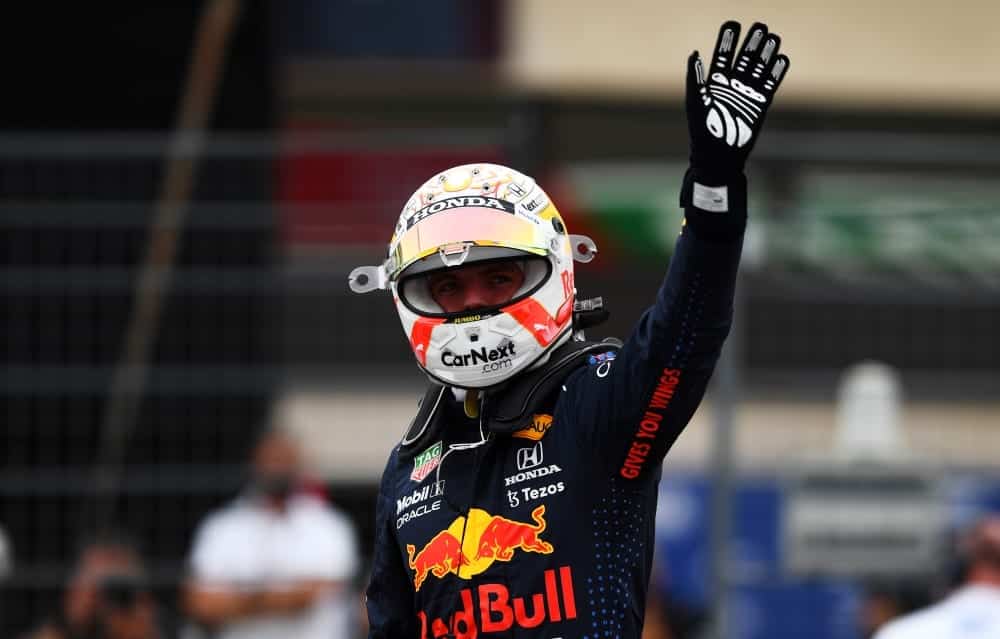 The battle for pole position came down the wire in France, with Max Verstappen snatching his second pole of the year with an excellent lap around the Circuit Paul Ricard. The Red Bull driver was on provisional pole with a lap time of 1:30.3 before the drivers set out for their final runs, but put in a blistering second run to become the only driver below 1:30 with a lap time of 1:29.9. This proved crucial, as Lewis Hamilton set a 1:30.2, which would’ve granted him first place had Verstappen not improved.

Hamilton starts second with his Mercedes teammate Valtteri Bottas was close behind, with a time of 1:30.3. The second Red Bull of Sergio Perez was one tenth off Bottas and will start fourth. Behind Perez came Ferrari’s Carlos Sainz, who looked quicker than teammate Charles Leclerc throughout qualifying, and Leclerc will line up seventh. Splitting the Ferrari duo is Pierre Gasly, the Alpha Tauri driver just 0.02 of a second adrift of Sainz at his home race. Both McLarens reached the top ten, with Lando Norris in eighth and Daniel Ricciardo in 10th; Alpine driver Fernando Alonso was sandwiched in between for the French squad.

Q2 was fairly straightforward, with the frontrunners sticking the medium tires on to preserve the softs for their Q3 runs. Perez initially went fastest, but was later barely surpassed by Hamilton. The session was ultimately anti-climatic as none of the drivers in the elimination zone improved in their final runs. Alpine had shown strong pace all weekend, but Esteban Ocon missed out on Q3 by just over a 10th of a second and wills start 11th. Behind him was Aston Martin’s Sebastian Vettel, who scored a podium last time out in Azerbaijan; Alfa Romeo’s Antonio Giovinazzi and George Russell in the Williams begin 13th and 14th, respectively. Mick Schumacher did not set a time and starts 15th.

The tight and twisty tracks of Monaco and Baku produced several red flags during qualifying, and many would’ve expected the expansive run-off areas at Circuit Paul Ricard to prevent that. Yet almost immediately in Q1, Yuki Tsunoda took a healthy amount of the inside curb in turn 1, spinning his Alpha Tauri and sending him backwards into the barrier. When he couldn’t find a gear, he was forced to retire from the session without a lap time, bringing out the red flag.

Some green flag running followed with nearly every driver setting a lap time except Aston Martin’s Lance Stroll, who had his first time deleted for track limits and bailed on his second lap after encountering traffic. Haas driver Schumacher had impressively gotten out of the elimination zone, going 14th, but ultimately caused the second red flag on the drivers final attempts in Q1. As he came through turn 6, the back end of his car swung out and Schumacher clobbered the wall. The crash guaranteed him a spot in Q2 but meant that Stroll had no chance to set a timed lap, putting him alongside Tsunoda on the last row. The premature conclusion to the session also spelled the end of qualifying for Williams driver Nicholas Latifi — beat to 15th by teammate Russell by just 0.002 seconds — Alfa Romeo’s Kimi Raikkonen, and Haas’ Nikita Mazepin.

—Formula 1 and tobacco sponsorship have an illustrious history. Michael Schumacher drove the Ferrari F2004 to a seventh drivers’ title with “Marlboro” emblazoned across the engine cover, while Nigel Mansell triumphed in a Camel-branded Williams FW14 and many Lotus’ have worn John Player Special levies. Attempts to ban tobacco advertising has simply led teams and sponsors to devise not-so-subtle workarounds. One prominent example is Ferrari’s Mission Winnow sponsorship, but the company, if you can even call it that, has announced this week that its logos will be removed from Ferrari SF21 for all European Union-based events, as well as the British Grand Prix.

Mission Winnow purports to be “an unconventional communications platform” designed to “drive change by constantly searching for better ways of doing things.” Behind those vapid statements is Phillip Morris International, one of the largest tobacco companies in the world. Mission Winnow first popped up on a Ferrari back in 2018 and is nothing more than a logo and a website full of marketing jargon, effectively a shell company which allows PMI to prolong its presence in F1. PMI hopes that you see the logo and google the company, leading to you reading about PMI and thinking about cigarettes.

It’s great to see this subliminal propaganda removed from F1, but this is not the first time Mission Winnow has taken a hiatus. Their logos were absent briefly in 2019 and for the entirety of 2020, but reappeared this year in an unusual green color on this year’s entry. Don’t be surprised if the Mission Winnow branding is used again, as each reappearance drums up controversy and brings attention to PMI.

—In other news this week, Esteban Ocon signed a three-year contract extension with Alpine to keep him at the French outfit until 2024. Although Ocon was trounced by teammate Daniel Ricciardo last year, he still collected a podium in Sakhir and had shown pace with Force India previously. This season, he’s matched his renowned teammate Fernando Alonso, and with Ocon seeming comfortable with the team, the move is a logical outcome.

Ocon’s contract solidifies his shift away from Mercedes. Although he official left their junior program when he signed with Renault for 2020, his manager is still Mercedes boss Toto Wolff and rumors have persisted that Ocon was in the running to replace Valtteri Bottas at Mercedes for 2022. But his commitment to Alpine means that seat is now open for George Russell to ascend to—that is, unless Bottas retains the seat.

That possibility is seeming more and more unlikely, and Russell is starting to get impatient. Russell recently said that he was “sure everything will be sorted no later than the end of the summer break.” Given that the Mercedes junior driver spent three seasons mired at the bottom of the grid with Williams waiting for a seat at Mercedes to open up, his desire to secure the deal as soon as possible is no surprise. He’s certainly earned the chance, and if he is denied a drive at Mercedes, it will raise questions over the ability of young talent to progress to top teams in F1.

Looks like this will bea battle throughout the year between Lewis and Max.