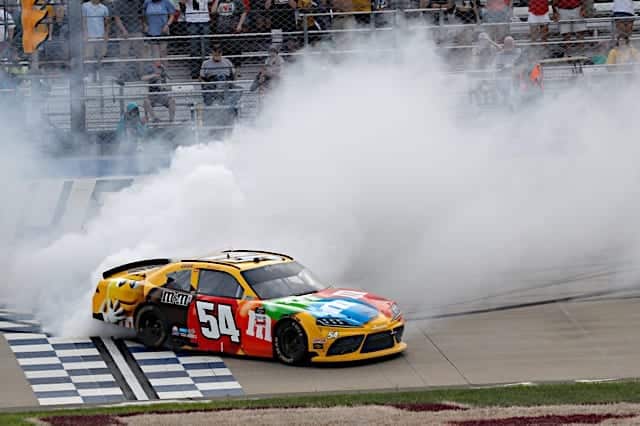 Before this weekend, one of the most ingrained memories linking Kyle Busch and Nashville Superspeedway together was the smashing of a victory lane trophy to smithereens following a victory at the track located on the outskirts of Nashville, Tenn.

He carved up another one on Saturday afternoon (June 19) in the Tennessee Lottery 250, demolishing the hopes that other frontrunners had of taking the win, his 100th in the NASCAR Xfinity Series. Moments after climbing from his car and greeting fans with his customary bow, Busch could not help but think of the dominance of another era in NASCAR’s No. 2 series.

“I remember growing up as a kid and watching Mark Martin win every week in that 60 car, just the domination he had,” Busch told NASCAR on NBC following his win. “And he’s No. 2 with 49 wins.”

As for the fate of the guitar this time after winning? Busch initially raised the musical instrument up in victory lane as if it was about to be smashed before putting it back down.

“Having a little fun. What’s the harm in having a little fun?” Busch said. “It is what it is. It happened, and today it didn’t. We’ll move on and I guess I don’t have to give pieces out to the rest of my crew guys. Maybe I’ll just buy a whole one for the guys who were on this 100th win and let them have their whole ones.”

In a race that saw just one on-track caution through the first two stages, the final 50 laps were anything but calm with five cautions in the final stage. It reracked the field multiple times, forcing Busch, who won stage two by multiple seconds, to fight for every inch of a race victory. He and his No. 54 car were up to par each time, holding off charges on three restarts in the final 30 laps.

This included overtime set up by a caution brought out by Landon Cassill, a sequence also marked by Justin Allgaier furiously fighting off Brandon Jones for second. That side-by-side fight wouldn’t end, and it helped Busch immensely. During overtime, Busch pulled away and when Jones was able to join a handful of others racing for second, it allowed Busch to pull away and race into history.

It was a bitter taste for Allgaier, who finished second. Like a week ago, the chance to overtake Busch late was there, and on Saturday he was able to race side-by-side with Busch following restarts with 38 and 28 to go. Busch was once again stronger than Allgaier in the end.

“Running second sucks, I’m not going to lie to you,” Allgaier said. “When we took the lead from Kyle, I thought we were good. We were able to drive away there, and when those restarts came, he got me down in three and four and we got loose and I think that was the difference-maker. After that, we just didn’t have the speed.”

The top five was rounded out by Harrison Burton, Josh Berry, and AJ Allmendinger. Jones was sixth in front of Jeb Burton, Noah Gragson, Austin Hill and Riley Herbst.

Busch, who started on the pole, didn’t lead a lap in stage one, as that went to Austin Cindric. The Team Penske’s driver’s day, however, had a rotten ending as he, Daniel Hemric and Michael Annett were involved in a multi-car incident with 28 laps to go and Cindric’s car was tagged and turned into the outside wall.

Austin Cindric takes a big hit as a multi-car crash unfolds right behind the leaders with less than 30 laps to go at Nashville Superspeedway. pic.twitter.com/ML6QZ970L0

The most dramatic wreck of the first two stages came 69 circuits in, as Stefan Parsons spun hard into the outside wall on the frontstretch contact initiated by the car of David Starr.

Bayley Currey’s car also made collided with multiple pit crew members on pit road in the early part of the race after appearing to have non-working brakes. At least one crew member was transported to a local hospital.

Per NBC, one of the pit crew members from Bayley Currey's team is being taken to a local medical facility for further evaluation.

Several other incidents occurred later in the final stage, including one involving Jade Buford and Joe Graf Jr. Buford appeared to get loose next to Graf and made contact, with Graf getting the worst of it.

Both ended up out of the race, though, as the damage on Buford’s car was too severe to continue.

The big wreck that collected quite a few leaders like Cindric, Annett and Hemric came on the following restart. A couple more cautions would also come in the final 20 laps, leading to a green-white-checkered finish. While Busch took the lead on the final restart, Jones fought Allgaier for second. Harrison Burton also joined the mix as a crash occurred on the backstretch, but the race stayed green to the end and Busch reached the century mark in Xfinity wins.

The NASCAR Xfinity Series returns to the track next Sunday for the Pocono Green 225 Recycled by J.P. Mascaro & Sons at noon ET on NBCSN.

I’m so tired of seeing a top tier team, with top tier equipment and with a top tier pit crew single handedly ruin a series for one guys ego. Maybe he can start running in the ARCA series next.

Ty Gibbs is there instead.

As usual, the NXS race will turn out to be the best race of the weekend. These cars and drivers (including KFB) are best suited to providing good racing throughout the field, even amazingly, at the front.

I was also impressed by Busch’s ability as the race went on, to learn from his earlier restart problems to find a way to make the high line work. He is a driver who actually thinks and improves during the course of the race.

The criticism from those who didn’t even watch is laughable.

It’s the same as Johnson and Knaus. Johnson would bitch about the car all race and Knaus would “make adjustments” all race long and at the end there would be a restart and the car would turn into the rocket ship it had always been and disappear into the distance. It’s the same now in the Busch series only it’s Reverend Joe instead of Mr. H.

I did watch the whole race even with Busch ruining the show. Hard to make a name for yourself in the NXS series when your dealing with top tier teams coming in. For those that did watch the race you might have heard the announcers talking about some of the drivers and teams having very few cars and resources. Hard to gain sponsorship when you have the big guys in there.

So you don’t consider Junior Motorsports to be a top tier team in NXS? From what I saw, Allgaier’s car was equal to Busch’s. And Allgaier is a veteran himself, who is really not in NXS to make a name for himself, but to earn a living as a permanent driver in the series.

And the fact is that even when Busch is not in the race (which is the majority of races), JGR and JRM are the class of the field. So, the problem, if it is one, goes way beyond Kyle Busch’s 5 races per season.

I think he meant to say “top tier DRIVERS coming in the series.”
And I think you knew that, but you saw an opportunity to undermine his comment and you took it.

No, I actually thought he meant the teams. I may be wrong, but that’s the way I read it. Others have posted on this issue that they wouldn’t mind Cup drivers racing in the lower series if they did so for an underfunded team.

Yes, of course you read it that way because that’s the way it was written which is why I pointed it out.
Maybe Chris will let us know what he meant but if I’d have to wager, it would be DRIVER not TEAM because JGR already has other cars out there every week. Or maybe I am wrong and he says the same thing every time a JGR car wins in Xfin regardless of the driver.

I thought it was pretty clear when I stated that the series was being run over by someone feeding their ego (even if only five races this year).

Yes, to be fair to Jobe, there are top tier teams which are part of the problem as well if they are bringing over their tech and everything else to the NXS team but to be fair some of them are using a driver that is moving up through the ranks.

Honestly, once NASCAR allowed big teams to form to corporate levels verses the smaller one team, maybe two back in the mid-90’s it’s made it so much harder for a smaller team to compete.

Yes, I know there will always be some that have more than others, it’s just how much of a disparity can be deemed acceptable before it hurts the racing and I think we are at, or past that point. Adding Busch into the mix makes it all that harder to watch (but I do just the same because I still like stock car racing).

Amen! Hallelujah!
Now this will be the last year he runs in Xfin. Glad we got that over. He has two more races already scheduled for this year and that should be it for him in Xfin. He promised to retire from that series once he hit 100. It’s a pretty impressive number but I wonder how many past cup champions could have done similarly if they had put any commitment to winning those lower tier races.
One thing is for sure, it will be difficult for anyone to ever eclipse that number now that Cup series drivers are severely limited in how many races they can run in lower series.

His ego will keep him in the Busch series. And the money he’ll bring in for Reverend Joe. He doesn’t have anywhere near the same winning percentage in Cup.