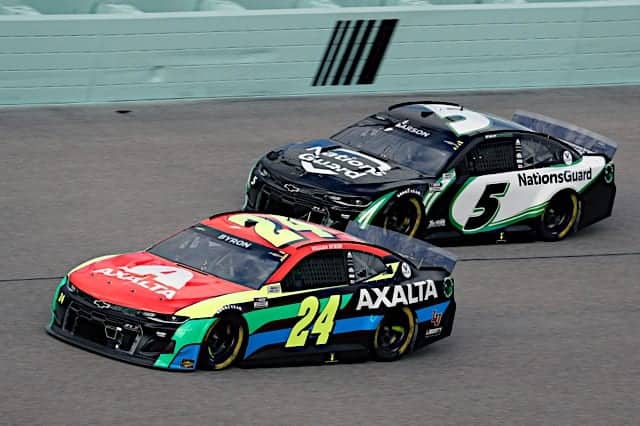 After getting to the top of the charts early in the session, Byron’s Hendrick Motorsports teammate Kyle Larson jumped ahead by a slim margin. However, the No. 24 made a mock qualifying run that brought him ahead of Larson. It was only by a bit, though, as both drivers put down lap speeds of 161.082 mph (or 29.724 seconds).

Fellow Hendrick cohort Chase Elliott also had a fast lap, going 161.022 mph, over one mph faster than the fourth fastest driver of Ricky Stenhouse Jr. Tyler Reddick’s No. 8 Richard Childress Racing Chevrolet was fifth with a lap speed of 159.568 mph.

Chip Ganassi Racing teammates Kurt Busch and Ross Chastain had the sixth and seventh quickest lap times, while Joe Gibbs Racing’s Denny Hamlin was eighth. Ryan Newman and Alex Bowman round out the top 10 drivers from the session.

There were no incidents reported in the period.