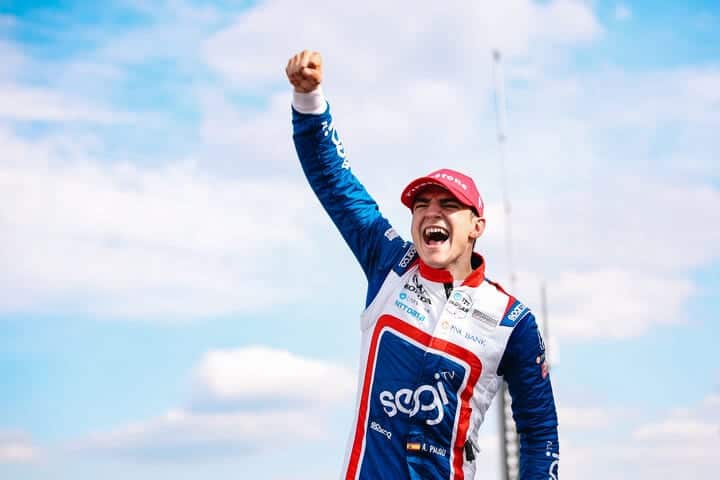 Alex Palou won Sunday’s (June 20) REV Group Grand Prix at Road America after leader Josef Newgarden was stricken by mechanical woes on the day’s final restart. While Newgarden dropped through the field to a disappointing 21st, Palou cruised to the victory over Colton Herta. Will Power, Scott Dixon and Romain Grosjean rounded out the top five.

Newgarden led from the pole position and dominated the day. Palou and Power spent much of the day in second and third, respectively, with only Palou appearing to have the pace to run with Newgarden, though the only time the field got close was under caution.

The fourth and final yellow saw Newgarden get a jump on the field on the restart before he slowed considerably and Palou blew by him. With no other drivers close by, he comfortably drove to his second victory of 2021.

“Down the front straightaway, soon as I got up to fifth gear, tried to shift to sixth and it didn’t take the selection so I was stuck in fifth,” Newgarden told NBC Sports after the race. “Just trying to get it up to sixth gear, it wouldn’t go, and then I got stuck in fifth in turn 1. I finally got it to go down and I could not get it to upshift after that. I got down to first essentially. … Just could not get it to upshift. I’m not sure what happened.

“Disappointing for all of us, I know we had a great car, we had a good car all day doing everything we needed to survive in yellows, survive in the fuel game. I felt like our car was a rocket ship, team Chevy did an amazing job for us, we had such amazing fuel mileage and good power. I’m super pleased with that, really proud of our team, proud of our partners. I guess it wasn’t meant to be again. I think we’ve got fast cars, it’s just not working out for some reason right now.”

.@josefnewgarden led 32/55 laps today at @roadamerica but had mechanical issues on the last restart.

This comes following Newgarden barely missing out on a win in Detroit last Sunday after a tire strategy gamble failed to return on investment. Team Penske remains winless this year. It’s the second straight race where the dominant driver didn’t end up securing the victory.

Grosjean’s fifth-place finish put him atop the rookie class after he ran inside the top 10 for much of the race. Scott McLaughlin finished 14th and Jimmie Johnson finished 22nd after an early spin.

Kevin Magnussen, who subbed for Felix Rosenqvist, had to retire from the race around lap 35 due to a mechanical issue and ended up 24th in his IndyCar debut.

It was all smiles for Palou, though, who took over the points lead in the standings.

The NTT IndyCar Series’ next race will be the Honda Indy 200 at Mid-Ohio on July 4th, with coverage beginning at 12 PM ET on NBC.