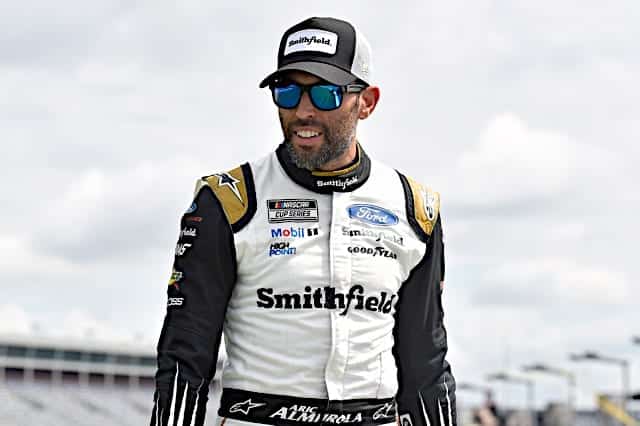 Aric Almirola scored just his third career pole and his first since 2019 as the second car out for qualifying at Nashville Superspeedway Sunday morning (June 20).

“That’s the hard part about this year without qualifying,” Almirola told NBC Sports. “We got in a wreck early at Daytona and it immediately puts you in a hole. Every race thereafter just compounds and last week always haunts you. You can’t ever start fresh the next week because you’re starting deep in the field.

“You work so much harder when you’re off; it’s unbelievable. We’ve been trying so hard to get back to the way we know how to run. Finally, something good happened to us.”

Almirola will lead the field to the green flag alongside Kyle Busch, who narrowly missed snagging the pole.

“I didn’t expect to qualify that well, so that’s certainly a positive,” Busch said. “That’s nice to have an up front spot like that. Overall, hopefully, today is a good day.

“We struggled yesterday so I wasn’t sure what we were going to have in store for us today. Felt OK there; have no idea what that means for a race car because we completely wholesaled everything and changed it all last night. We’ll see what we have here later today.”

Joey Logano starts third, while William Byron and Kyle Larson round out the top five.

Quin Houff did not complete his lap after nearly spinning out. He’ll start in the 39th and final spot.

.@P1_Houff keeps his ride from fully turning around in #BuschPole Qualifying.

Drivers are on the edge trying to find speed! pic.twitter.com/7ZMSiyAeyQ

It’s great that Amirola won the pole. He is having a nightmare season.

However, how many have noticed that he will not get what is usually the biggest perk of winning the pole? Because of Sunday qualifying, the pit stalls were awarded based on the NASCAR pandemic formula, so guess who gets the first pit stall? The new “best ever driver ever in the history of racing.” Meantime, Amirola is forced to pit in an undesirable stall along with the other backmarkers.

If NASCAR is going to continue abbreviated practice and qualifying, they need to address this issue.

Good to see qualifying back.
I am sure Almirola, Custer, Jones and DiBenedetto agree.

Also agree with Jo about the pit stalls but I understand that is the way it has to be if qualifying is a few hours prior to the race. No reason they couldn’t have qualified yesterday since they had to show up for practice anyway.