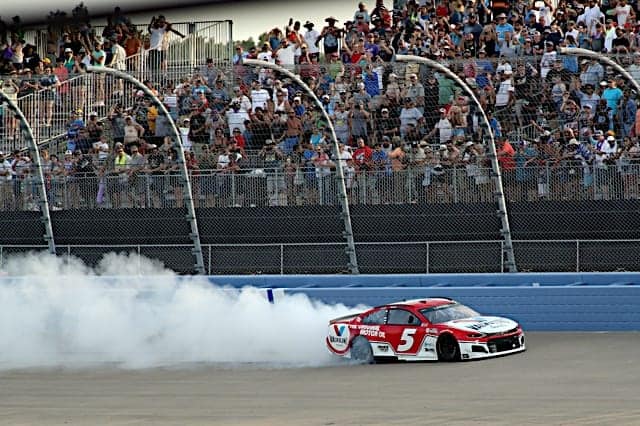 It might’ve been a new venue, but in the words of Talking Heads’ “Once in a Lifetime,” it was the “same as it ever was” with Kyle Larson celebrating in victory lane.

“It was a great day,” Larson said afterward. “We never really had to run behind people, so I don’t know. When my teammates got out in front again, it probably would’ve been hard to pass them, but [the car] was really good, cut the middle of the corner really well and our pit crew did an awesome job again. That No. 1 pit stall helps a bunch too […] I just hope we can keep it going.”

"This crowd is awesome!"@KyleLarsonRacin wasn't the only one impressed with the support at @NashvilleSuperS! pic.twitter.com/XfF0CZT4vZ

With Larson leading the pack to green, the field barely made it half a lap before the first caution flew: Quin Houff‘s No. 00, again sponsored by the Jake Gyllenhaal-Eiza González starrer Spirit Untamed, smacked the wall and ground to a halt on the backstretch.

Kyle Busch had taken the lead prior to the yellow flag, but Larson quickly got back by him. By the time Busch closed back in, another caution flew in the middle of pit stops for a Tyler Reddick spin.

.@TylerReddick is being so damn hard on himself after that spin…

? "I'm 2-for-2 at being a terrible driver […] when I slid sideways I threw the brain out the window. Hopefully I never find it again." ?

Busch retook the lead on pit stops, losing it to Larson on the restart, but the field was reset again when Ryan Blaney slammed the wall. Blaney came down pit road to fix an issue before the start of the race, but his already-bad day came to an end with the crash.

That was a big hit for Ryan Blaney. https://t.co/eaEjeZqcd4 pic.twitter.com/HS5SwcJBlt

Mixed in with the Kyle & Kyle Show was a car with just one top-five finish this year: Stenhouse’s No. 47. He contended with the frontrunners throughout the afternoon, even passing both Busch brothers late in the opening stage. Chase Elliott won the eventful 90-lap stage.

Elliott’s victory marked the first time that Larson didn’t win a points-paying stage since May 23.

Larson shot back out to the lead for stage two with Stenhouse in tow but another caution flew when Bubba Wallace spun. Wallace had apparently incurred damage from an earlier incident involving Chris Buescher and Justin Haley, which sent debris hurtling into Wallace’s windshield and roof. A brake rotor from David Starr‘s machine reportedly may have caused the spin.

Huh. That's not the kinda damage you see every day … pic.twitter.com/DWlKPuj4cx

Charging around the same time was polesitter Almirola, who made his way inside the top five and eventually finished ninth in stage two. Larson won the segment.

Cautions for Ryan Preece, Wallace and Chase Briscoe all occurred during the first 50 laps of the final stage. Larson and Byron fought hard on one of the restarts, leading to close-quarters racing in turn 2 between Byron, Elliott and Denny Hamlin while Larson set sail. Busch, meanwhile, had his day go south when he glanced off the wall on a restart. He dropped like a rock, eventually making his way back inside the top 20 but ran as low as 26th.

The rest of the race ran without incident but featured a charge from Chastain who rocketed into the top five, driving past third-place Harvick in the No. 4 Grave Digger car and second-place Byron to secure the runner-up spot for his best career finish. Chastain’s teammate Kurt Busch ran out of gas at the end, but Larson managed to save enough on his end to cruise to a five-second victory over the rest of the field.

Almirola and Harvick capped off a strong day for Stewart-Haas Racing, a much-needed boon for the Ford stable after a mostly rough first half.

The seventh-place effort for Suarez was his second-best finish of the season, as was the sixth-place finish for Stenhouse. Kyle Busch rebounded for an 11th-place finish, while Corey LaJoie and Anthony Alfredo recorded top-20 efforts of their own.

Elliott, who finished 13th, was disqualified for five loose lug nuts and credited with a last-place finish.

The Cup Series next heads to Pocono Raceway for a doubleheader in Pennsylvania. The first race of the weekend is set for Saturday, June 26 at 3 p.m. ET and the second is scheduled for Sunday, June 27 at 3:30 p.m. ET. Coverage will be on NBCSN.

Wow, Larson is on fire. He might be peaking too soon though. It’s a long way to Phoenix and it’s hard to imagine him keeping that level of dominance up for that long.

He loves to race and win.

Don’t they all? Seems you are crushing on little Kyle!

I have never been more supportive of NASCAR’s championship system. If Larson is going to be allowed to win all the rest of the races until the last one, I would so LAUGH OUT LOUD if he got wrecked in that one!

Hopefully, someone will get close enough to put him in the wall before that.