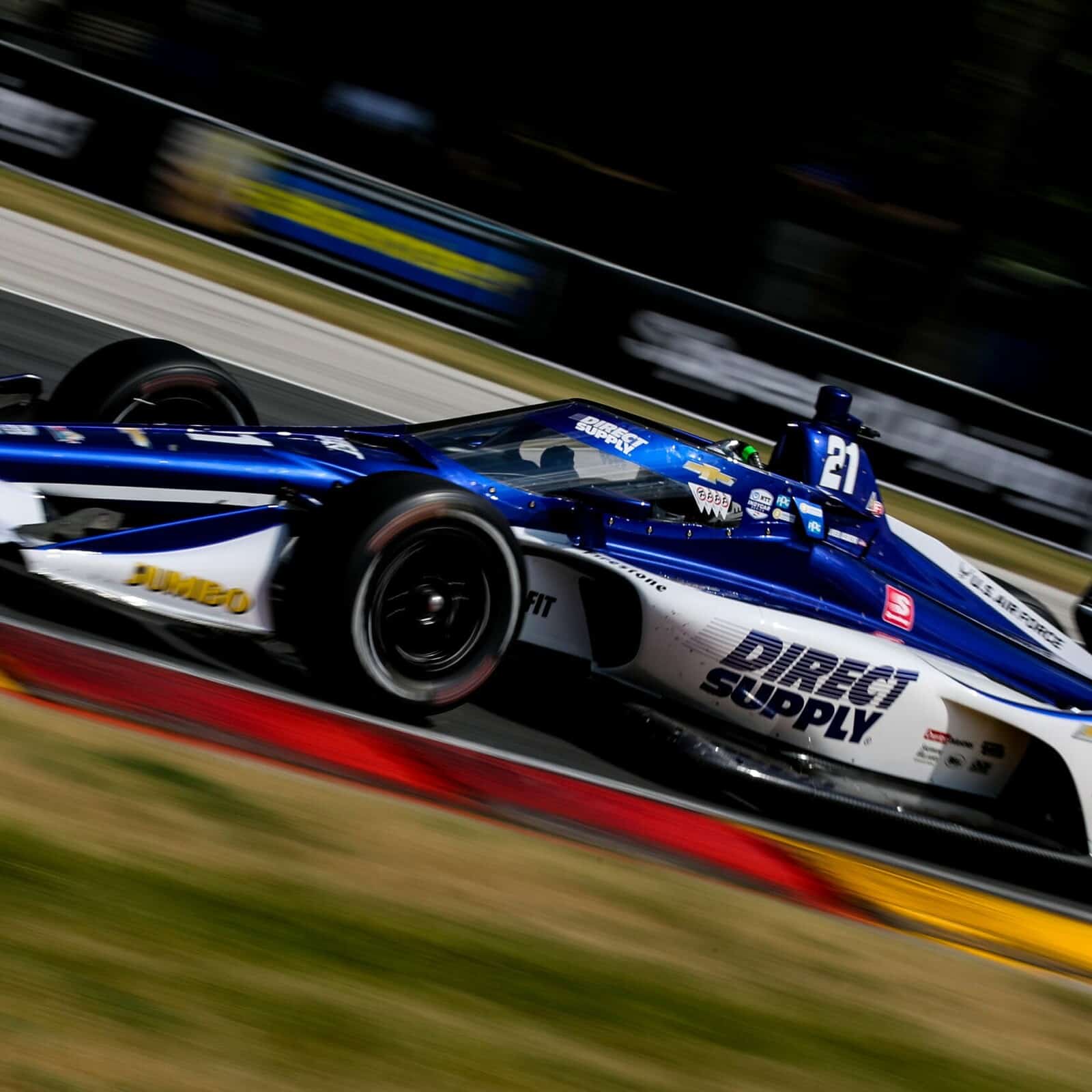 After Kevin Magnussen pulled over off course just after turn 7 on lap 34, Askew and Harvey decided that under the ensuing full course yellow that Askew would bring the No. 21 Ed Carpenter Racing Chevrolet down pit road. The goal was simple: pray for enough yellow flag laps over the remaining 19 laps that Askew wouldn’t have to pit again in the 55-lap race.

Three other cars in contention stopped under that caution and Askew would restart behind all three of them in Jack Harvey, teammate Conor Daly and Simon Pagenaud.

A few laps after the restart, the leaders started pitting, moving Askew and the rest of the field up the order.

“The pace started picking up and then we wouldn’t be able to hit our number with the (fuel) savings that we were getting due to the pace,” Harvey said. “So we decided we should just go hard and then pit toward the end of our stint thinking that was the best way to pass the guys that we were racing with in the group […] and we were just making up so much ground by going quicker, like six seconds a lap so it wasn’t going to take us long making up that distance.”

Askew moved up to third place near the race’s end and once Max Chilton and Takuma Sato pitted respectively from first and second place, Askew picked up the race lead for two laps.

“They told me [ was leading] and I knew I wasn’t going to hold on to it but it was just cool anyway,” Askew said. “In the end it was a good situation for us, I ended up 12th, really happy about that on debut here with Ed Carpenter Racing. “I think that was one of my strongest road course [race performance] even though the result doesn’t show it. I was passing a lot of cars.

“We should’ve had a top 10 but over the whole race we probably lost about six positions in pit lane, so I don’t know what was going on there, but I do have to say a huge thanks to Ed Carpenter Racing and everyone for the opportunity.”

Earlier in the race, Askew lost five positions on his lap 24 pit stop, dropping from 15th to 20th. However, there was one final ace in the hole that the ECR crew delivered for Askew and that was a new set of the red sidewall alternate tires from Firestone. Askew had those on his car for the final two laps of the race and with the added grip from the softer tires, the 2019 Indy Lights champion managed to climb from 15th to 12th, passing Ryan Hunter-Reay on the last lap to finish in the top half of the field after Alex Palou won.

That wasn’t a bad result for IndyCar’s new super sub, especially since the other cars that pitted with Askew finished 17th (Harvey), 18th (Pagenaud) and 20th (Daly).

Askew got a call Monday night from team owner Ed Carpenter that Rinus VeeKay’s broken clavicle from a cycling injury would sideline the Dutch driver from the No. 21 ride. Askew accepted the ride, especially considering that compared to the substitute role he took in the last race, Askew actually knew Road America, having raced at the track a handful of times before.

However, Askew still had to perform, and with a new crew and engineer to work with, it wasn’t going to be easy. However, Askew had VeeKay there the whole weekend to help him get integrated with the team, and the crew responded well.

“Oliver’s really good, I mean he got in and did a great job the first two sessions, was really fast and learned the whole weekend,” Harvey said. “A little bit off on the balance in qualifying so we messed up there a little bit but other than that, he did great. The pace was good in the race, he stayed in there, he’s pretty calm, is thoughtful about his decisions and what he does so he’s a really good kid.”

For his part, Askew’s feelings were positive from the word go.

“I think so, this is probably the most comfortable and confident I’ve been on a road course weekend in IndyCar so it’s good,” Askew said.

VeeKay slid from fifth to sixth in points after missing Road America but is hoping to race at Mid-Ohio Sports Car Course in two weeks if his shoulder has healed in that time.