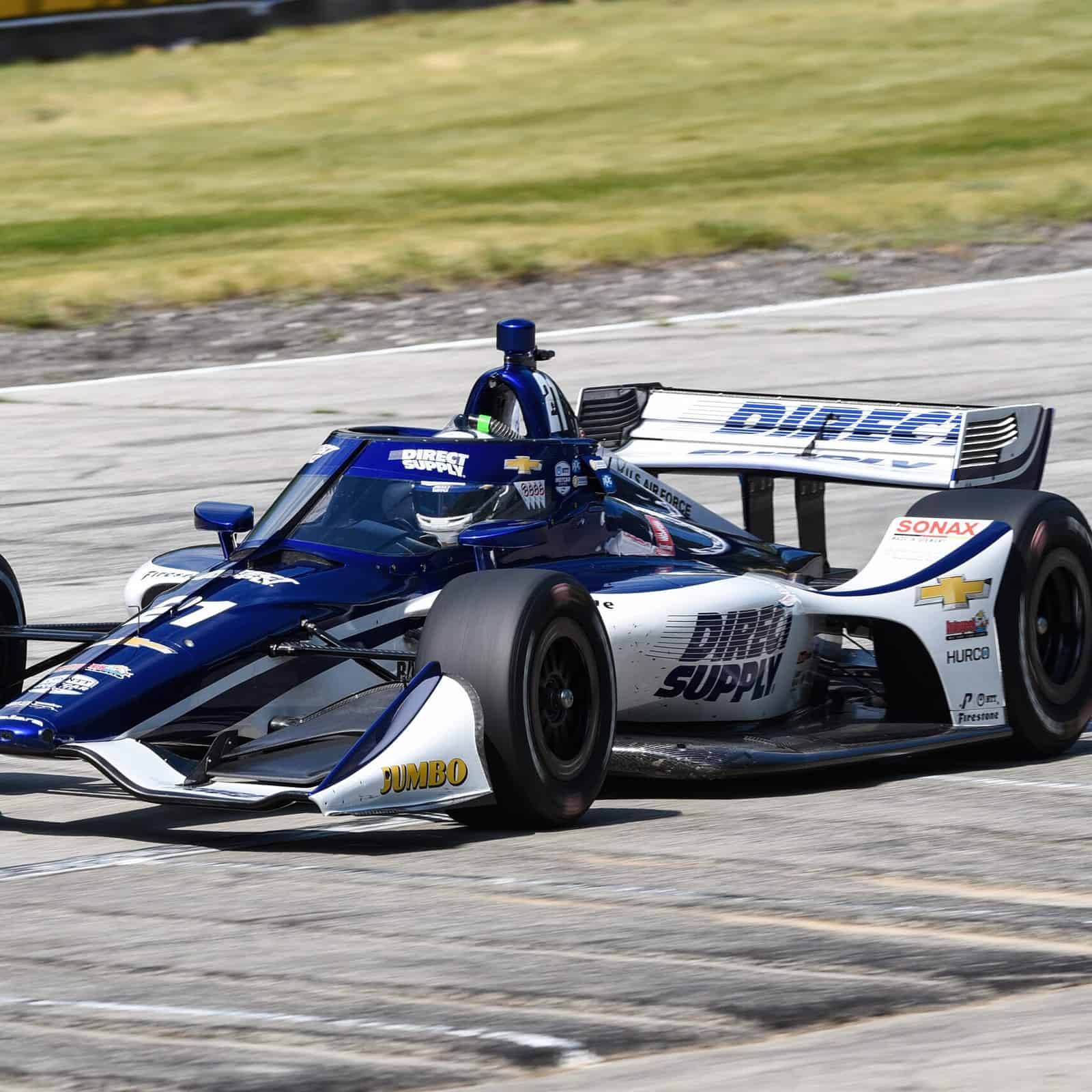 Road America has long been a favorite stop on the calendar in the IndyCar community and the 4.014 mile road course did not disappoint the day before the REVGroup Grand Prix.

The NTT IndyCar Series has had seven different winners in the first eight races so far in 2021 and remarkably, Team Penske hasn’t set foot on the top step of the podium once.

With Josef Newgarden starting on pole position, Will Power starting fourth, Simon Pagenaud in sixth and Scott McLaughlin in 17th, the team has perhaps its best shot at scoring their first win this season, especially since Power and Newgarden both have IndyCar wins at Road America.

Moving further down the grid, Romain Grosjean was seventh fastest with a rather curious anomaly. Newgarden set pole position with a lap of 1 minute, 46.0186 seconds but Grosjean is listed with a faster time of 1 minute, 45.9015 seconds. There’s a reason for this.

Many drivers qualified in group two of knockout qualifying on new red sidewall tires that provide more grip, hence why everybody that advanced into the Firestone Fast Six set their fastest times of the weekend in that group. In fact, everybody from seventh through 12th would’ve qualified no worse than seventh place if the grid were lined up straight up by lap time instead of by the knockout format INDYCAR uses.

The red tires have more falloff and those that used them were actually slower than Newgarden’s team as they figured that new black sidewall primary tires would be faster than used reds. Newgarden’s crew ended up being right.

After hitting a piece of debris during Saturday’s morning practice session, the six-time IndyCar champion had to sit out most of the practice session as the No. 9 Chip Ganassi Racing crew changed out the part of the floor that was damaged by the debris.

Dixon went out for a last bit of practice before his involvement in group one of the first round of qualifying. Try as he might, Dixon was just .0341 seconds off of advancing through to the second round.

What’s weirder is that according to the qualifying results listed by INDYCAR, Dixon’s fastest lap of 1 minute, 46.3427 seconds was the 11th fastest time on the results sheet. To back up his pace, Dixon was second fastest in the final afternoon practice session, just .0145 seconds slower than fastest driver Colton Herta.

Dixon would be a good bet for a top five finish at Road America. He finished in that position in 2019 after a collision with Ryan Hunter-Reay on lap one dropped the 2008 Indianapolis 500 winner to last.

Kevin Magnussen had only a couple of days to prepare to drive in place of Felix Rosenqvist and so far hasn’t done too bad of a job considering the circumstances.

The Dane has been near the bottom of the time sheets in every practice so far, but not losing any practice time to fix any damage or any troubles is a bit of a victory in itself.

Magnussen will start 21st out of 25 cars but the goal is simple: turn in as many laps as possible and absorb all the knowledge you can.

Eventually, Magnussen would like to race in IndyCar. He’s made no secret of that fact. His first opportunity will be at one of North America’s most iconic tracks.

After Rosenqvist’s accident at the first Detroit race, the Florida native got called up to race in the second race, with his only practice being the 10 minutes of qualifying before racing as far as he could before a mechanical failure sidelined the No. 7 Arrow McLaren SP Chevrolet.

On Monday, Rinus VeeKay broke his clavicle in a cycling incident. Late that night, Askew got a call from Ed Carpenter. Having an Indianapolis area code meant that Askew would pick up the call, and Askew had a ride for another week.

The 2019 Indy Lights champion has impressed so far, turning in the fifth fastest time in the Saturday morning practice session before not advancing out of the second group of the first round of qualifying.

Road America hasn’t always been kind to Askew. In 2017 when Askew raced in USF2000, a camber shim fell out of one of the pushrods on the car, skewing the ride height and affecting the handling.

Askew never won at Road America in Road to Indy competition, his best finish being a pair of thirds in the six races he ran. With a car that has won earlier this year, Askew is a legitimate threat for a good finish if everything works out for the Floridian.

In Indy Lights, Linus Lundqvist had a one point lead on David Malukas and a four point lead on Kyle Kirkwood. Malukas was involved in a first corner incident and fell down to seventh place while Lundqvist finished fourth and Kirkwood won his fourth race of the season.

More importantly to the statisticians, Kirkwood scored his 25th win in the Road to Indy, breaking a tie with Spencer Pigot for having the most wins in Road to Indy history. However, Kirkwood is more focused on the larger objective.

“Everyone else looks at it as a bigger deal than I do. I think to be honest, I’m just looking at the championship,” Kirkwood said. “Getting race wins isn’t paying the budget or scholarships going to IndyCar, it’s the championship that matters to me, so obviously winning races wins championships as I always say, so it’s important to just keep getting as many of those as possible.”

Kirkwood now leads Indy Lights by eight points over Lundqvist at a track that means a lot to the Jupiter, Florida native. Kirkwood is undefeated at Road America and has actually never won from pole position at the track. In 2019, Kirkwood’s wins at Road America jump started his championship aspirations where he went on to win nine out of the next 10 races that year. A similar situation can happen for Kirkwood this year that could lead to him being the first driver to win all three championships on the Road to Indy.

“We’ve just got some momentum now and I think it’s going to carry,” Kirkwood said. “I know we’re going to be really good at Mid-Ohio as well, I think this is the track we expected to struggle the most at I think, and that’s just not the case. We had some testing here two months ago and we were actually unsure of the changes that we made because it was strange conditions, but we thought we got the car a lot better in those conditions. Now it’s really hot and we were like, ‘Oh, maybe it’s not going to be good,’ and it’s proven to be really good so we’re really happy with the outcome that’s happening right now.”

In Indy Pro 2000, Christian Rasmussen still has the points lead but was involved in a first lap incident that eliminated four cars. Braden Eves finished fourth behind Manuel Sulaiman, Artem Petrov and Jacob Abel and is only five points behind last year’s USF2000 champion.

Moving down to USF2000, Kiko Porto earned his second victory of the season after a spirited battle with Michael d’Orlando. The only Brazilian in the field snatched the points lead from Yuven Sundaramoorthy who finished eighth in the first race.

Each Road to Indy series has one race on Sunday ahead of the REVGroup Grand Prix at noon ET on NBCSN.

Jimmie Johnson is the Milka Duno of Indy Car, except he gets no criticism. Just that he is in a learning process. Amazing, the double standard that is shown here. How long will this go on.